Characterising the structure of breathing MOFs

A research group from the University of Sheffield have used Diamond Light Source to characterise an unusual metal-organic framework (MOF). The study, published in Nature Chemistry, gives an insight into the structure of MOF materials that exhibit continuous breathing behaviour.

MOFs are of interest thanks to their porous nature, which enables them to accommodate guest molecules within their structure. A number of MOFs have been shown to demonstrate ‘breathing behaviour’ in which the pores in their structure can switch between both open and closed (or wide-pore and narrow-pore) states.

The researchers characterised the crystal structure of the MOF (Me2NH2)[In(ABDC)2] (ABDC, 2-aminobenzene-1,4-dicarboxylate), known as SHF-61, and discovered it displayed a rare ‘continuous breathing behaviour’ adopting not just wide-pore and narrow-pore states, but also displaying a potentially infinite number of structures in between. By activating the MOF through removal of different solvents from the pores, the team was able to generate empty framework structures with different pore openings, which demonstrated different selectivity and adsorption capacities for CO2, N2 and CH4 gases. Through in situ diffraction studies at both the High Resolution Powder Diffraction and Small-Molecule Single-Crystal Diffraction beamlines (I11 and I19), they were able to establish the structural changes that occur during gas adsorption. 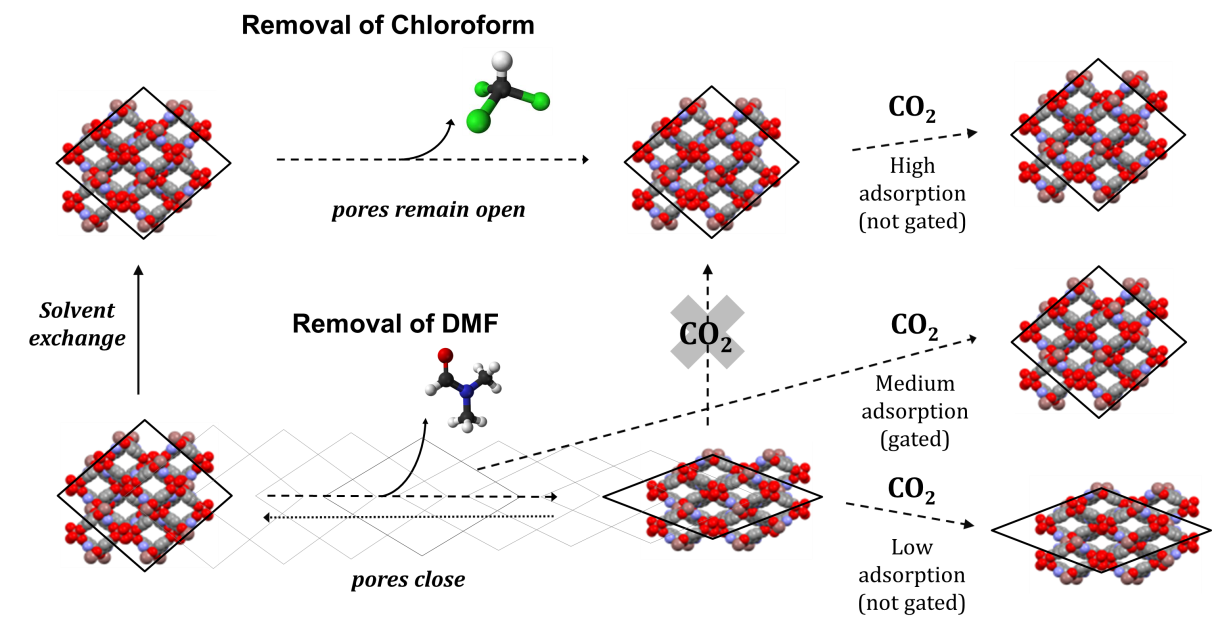 Figure 1: Overview of the solvent-dependent continuous-breathing properties of the SHF-61 MOF that leads to changes in CO2 adsorption behaviour.

Flexible MOFs
MOFs are porous crystalline materials that are of interest for a number of applications, including the capture or separation of gases, catalysis and drug delivery. To date there are around 20,000 known MOFs but of those as few as 100 demonstrate flexibility – in which they are able to switch between open and closed pore structures when exposed to an external stimulus.

Even rarer is a flexible MOF that is stable enough to characterise with single-crystal X-ray diffraction, as larger crystals tend to crack when the MOF undergoes dynamic behaviour associated with pore opening or closing. However, in a new paper, researchers found the MOF under investigation retained its crystalline structure, allowing them to study it on the Small-Molecule Single-Crystal Diffraction beamline (I19) at Diamond. The MOF in question, SHF-61, has a tetrahedral arrangement of ligands around each indium-metal centre, with a network structure resembling that of diamond.

Continuous breathing
To study the compound the team synthesised the MOF before removing the solvent by heating or vacuum. Alongside measurements taken at I19 they also followed structural changes using X-ray powder diffraction at the High-Resolution Powder Diffraction beamline (I11). The diffraction measurements showed that removing dimethylformamide (DMF) solvent led to a framework with an empty narrow-pore structure, but exchanging the solvent for chloroform before removal resulted in an empty structure with wide pores. The difference in dimensions between the two crystalline forms was significant – in the order of a few Ångströms.

Unusually the team also showed that when removing DMF, the framework’s pores closed gradually, leading to intermediate structures whose pores were not fully open or closed. “There are very few examples where you can access stages in between but this one has a continuous motion,” says Professor Lee Brammer of the University of Sheffield and the principal investigator for the study. The team believe that the DMF within the pores forms strong interactions with the surrounding MOF. When the DMF is removed gradually the framework closes around it to maintain interactions. In contrast chloroform, which is neither a polar solvent nor able to form strong H-bonds, only interacts weakly with the surrounding MOF and therefore its removal does not induce the framework’s pores to close around it in the same way.

Gas capture
As well as the change in structure the team observed different gas selectivities for the resulting frameworks. The wide-pore structure formed by removal of chloroform was shown to be more highly selective for CO2 over CH4. The narrow-pore form did not show this selectivity, and also demonstrated a lower gas adsorption capacity for both gases in general. 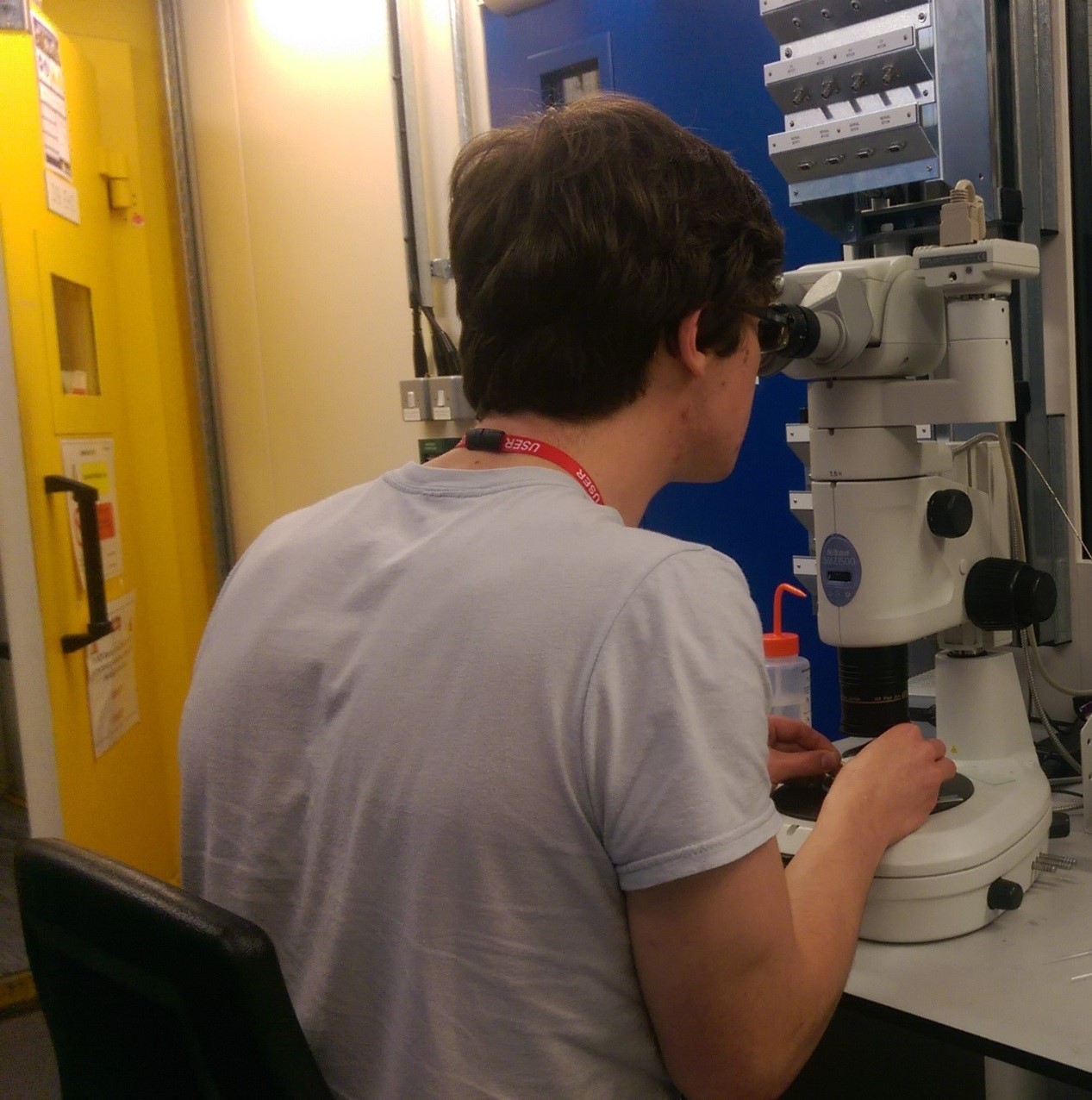 Figure 2: Dr Elliot Carrington selecting crystals for study on the I19 beamline.

“We also looked at gas absorption halfway along the [DMF] desorption path,” adds Prof Brammer. Using a combination of diffraction and gravimetric gas adsorption measurements, the latter carried out by Dr. Ashleigh Fletcher’s group at University of Strathclyde, the team discovered the MOF at this stage exhibited gated absorption of CO2, absorbing small amounts at low pressure before larger uptakes taking place beyond 5-7 bar, due to a rapid transition to a wide-pore structure (gate opening).The team found that the diffraction measurements they carried out at Diamond gave them a real insight into what the MOF was doing when these changes took place. In particular the single crystal X-ray studies gave accurate detail on the crystallographic structure. “Being able to characterise the structure accurately is a key part of determining its behaviour. Diamond Light Source allows cutting edge experiments that get to the heart of how the MOF behaves,” says Prof Brammer.

“This is just the tip of the iceberg in terms of this material,” he adds. The team now hope to study the MOF further to investigate whether they can tune its behaviour better, which ultimately could lead to future applications.