Scientists using the Electron Bio-Imaging Centre (eBIC) at Diamond Light Source have recently uncovered the structure of a vital molecular machine that adds multiple adenine bases to the end of mRNA. The 3.5 Å structure of the polymerase module of Cleavage and Polyadenylation Factor (CPF) was published in Science, and demonstrated a striking similarity with other DNA and RNA-binding proteins.

In a cell, genes are transcribed from DNA into mRNA, which are then used as templates to make proteins. Often mRNA needs an additional level of processing to make it fit for translation. One such edit involves the cleavage of the end of the mRNA and the addition of a poly(A) tail. This tail stabilises the mRNA, stimulates translation and also enables the export of the mRNA from the nucleus into the cytoplasm. Intriguingly, the length of the poly(A) tail can influence the properties of the mRNA, and errors in tail addition are associated with human diseases.

To fully understand the mechanisms underpinning the addition of poly(A) tails, a collaborative effort between scientists from the MRC Laboratory of Molecular Biology in Cambridge and the University of Oxford sought to characterise the protein complex responsible. Together, they used cryo-electron microscopy (cryo-EM) at eBIC and LMB, along with other analytical techniques, to finally reveal the structure of the CPF’s polymerase module and key mechanistic features of the molecular machine. They found that the polymerase module acts as a hub to bring together all the factors needed for poly(A) tail addition. 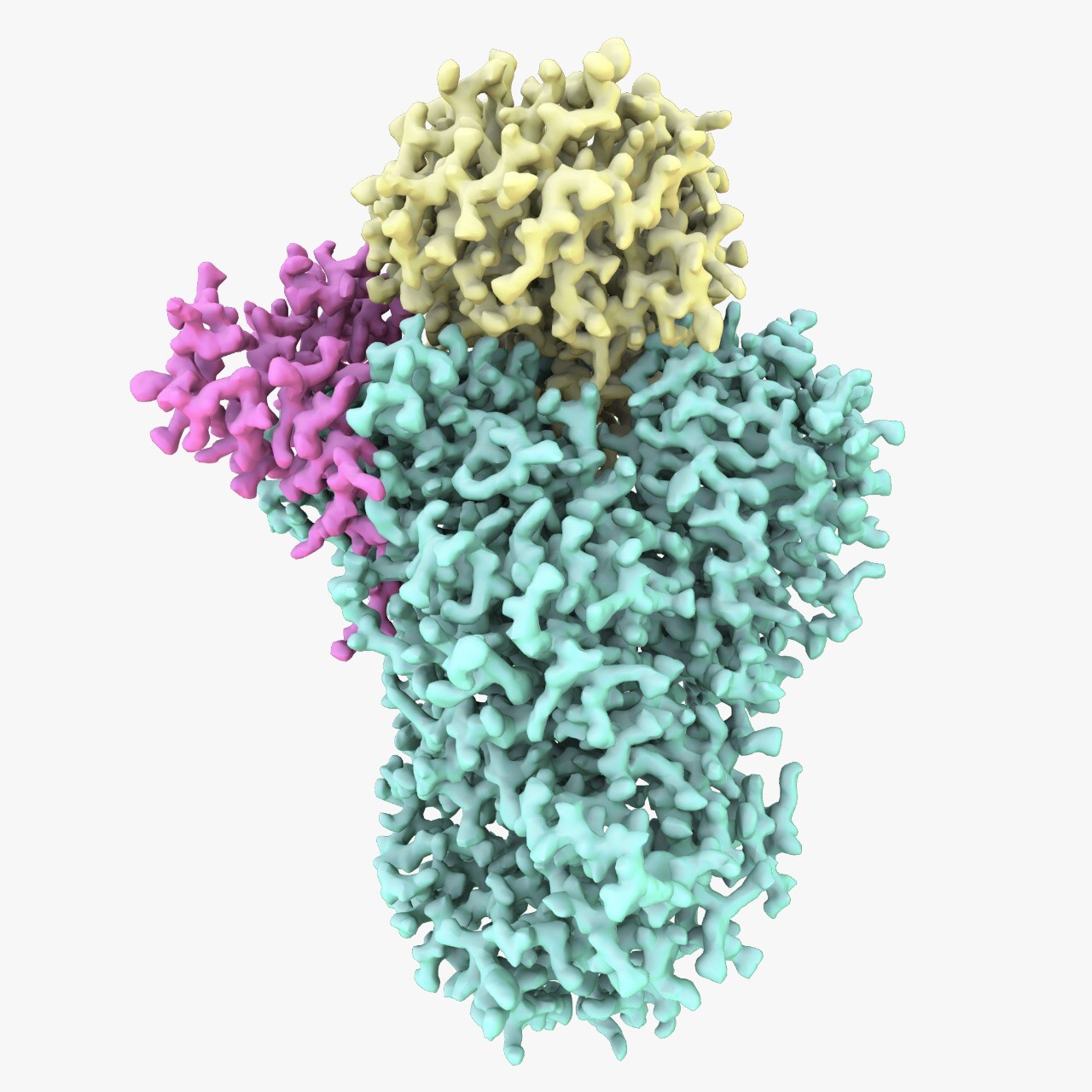 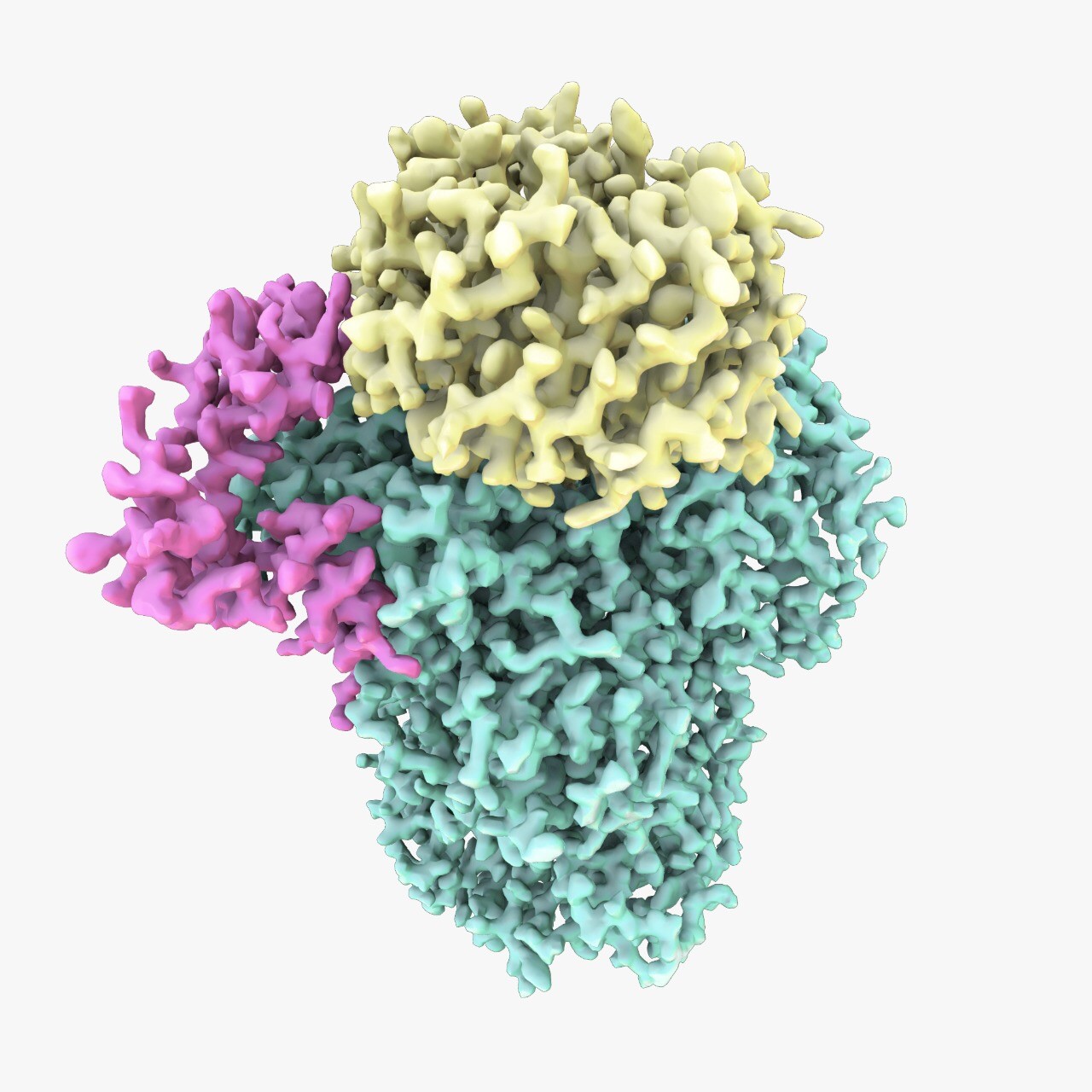 Figure 1: Cryo-EM structure of the polymerase module of the 3′-end processing machinery. The three protein subunits are in different colours: Cft1 is in green, Yth1 is in magenta and Pfs2 is in yellow. Image credit: A. Casañal and  T. Martin/MRC LMB

Highly-conserved protein complex
Poly(A) tails are found at the 3’-end of almost every eukaryotic mRNA. Similar to splicing, the addition of the tails is an essential modification required for gene expression. The tails control how long the mRNA is present in the cell and how often it is translated into protein, and errors or changes in the tails are associated with diseases such as β-thalassemia blood disorders, thrombophilia and cancer. Despite the importance of such a process, little is known about the protein complex, called Cleavage and Polyadenylation Factor (CPF), that is responsible for adding the poly(A) tails.

CPF is a highly-conserved protein complex that comprises multiple subunits with a combined molecular weight of approximately 1 MDa. Efforts to characterise CPF have been hampered by difficulties harvesting pure CPF in sufficient quantities and as such structural data were scarce.

Dr Lori Passmore, group leader at the MRC Laboratory of Molecular Biology and principal investigator of the study explained the team’s motivation: “Understanding the structure and function of intact CPF, and how the four enzymes within the complex are co-regulated, has been a central question in the field of gene expression for decades. Now we have begun to address this by providing a model for the assembly of the entire complex, and a structure of the polymerase module.”

The team then turned their attention to the polymerase module of CPF, which they expressed in insect cells. This protein complex was known to contain five subunits, yet the interactions and architecture of the subunits were unknown. The module was examined using cryo-EM at eBIC and LMB, and a high resolution structure was determined. Dr Passmore clarified their results: “The high resolution of our map allowed us to build atomic models of the components. Of the more than 1,700 amino acids in our structure (approximately a quarter of CPF by mass), only 72 amino acids had a previously known structure. There are still only a few structures that have been built entirely de novo using cryo-EM data. This allowed us to observe for the first time how the subunits formed an intimate assembly.”

Striking similarities
The structure of the polymerase module was compared to other structures and amazingly it was found to resemble other DNA and RNA interacting proteins such as the DDB1-DDB2 DNA repair E3 ligase and SF3b pre-mRNA splicing complexes. “The similarity between these complexes is striking. All three complexes bind nucleic acid and, interestingly, they are each involved in processes that are hallmarks of eukaryotes: splicing, polyadenylation and ubiquitin-mediated DNA repair,” Dr Passmore elaborated.

The team was able to demonstrate that the polymerase module acted as a hub, bringing together the poly(A) polymerase, accessory RNA binding factors and substrate RNA to add the poly(A) tails efficiently. The impact of such a discovery is groundbreaking as this is an essential cellular process.

“With continuing progress on understanding the mechanisms of polymerases, spliceosomes and ribosomes, CPF is one of the next frontiers. Our work not only provides insight into polyadenylation, having broad relevance in gene expression, RNA biology, and multi-protein assemblies, but also provides the framework for future studies aimed at an understanding of the entire CPF,” Dr Passmore concluded.

To find out more about the eBIC, or to discuss potential applications, please contact Dr Alistair Siebert or Dr Dan Clare: alistair.siebert@diamond.ac.uk, daniel.clare@diamond.ac.uk