Conventional lithium ion batteries work by storing charge through redox changes involving cations. However the storage capacity is limited by the redox capacity of tradition metal ions in the cathode. Newer lithium-rich cathodes on the other hand are able to exceed this limit, leading researchers to believe that the anion must be playing a role. However, the mechanism of behavio had yet to be experimentally verified.

Researchers at Diamond Light Source used the Core X-ray Absorption Spectroscopy (XAS) beamline (B18) to help find the explanation. Using B18 the team mapped oxidation state changes of the transition metals in the cathode to understand better how these materials operated. This technique was one in an arsenal of methods which they applied to this problem which also included electrochemistry, X-ray Diffraction, Neutron Powder Diffraction (NPD) , mass spectrometry and Soft X-ray Absorption Spectroscopy (SXAS) studies.

The studies enabled the team to elucidate that both cation and anion redox reactions were indeed taking place in these lithium-rich (Li-rich) materials. They hope that this new understanding of the mechanism behind the behaviour will help to design materials and batteries with greater capacities than those currently available.

Measurements made at Diamond Light Source have recently improved the understanding of how charge is stored in lithium-ion (Li-ion) batteries. These results provide a direction for new material designs with significantly improved capacity of the resulting batteries. Intensive study of LiRich compositions has in recent years led to the conclusion that oxygen ions are playing an important role in compensating charge storage.1-6 Looking at a popular Li-rich cathode material, the researchers used a combination of hard and soft X-ray absorption techniques to quantifiably explain for the first time both the transition metal and oxygen’s role in Li-ion charge capacity. 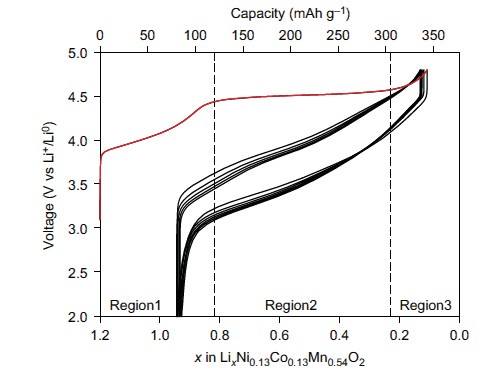 Figure 1: Charge–discharge curves for Li1.2Ni0.13Co0.13Mn0.54O2. Variation of potential on Li extraction and then reinsertion on the first and subsequent cycles.

Li-ion batteries are ubiquitous in almost all portable electronics. The batteries operate by removing (deintercalating) Li+ ions from the cathode during charge and reinserting (reintercalating) them on discharge. The cathode material is key to the battery’s capacity, and is typically composed of lithium, one or more transition metals (Mn, Ni, Co), and oxygen. The charge state of the transition metals can vary which enables the energy storage within these batteries. Previous research had shown that Li-rich cathode materials exhibited a charge capacity beyond that which transition metals could compensate for, which can only account for region 1 in Fig. 1, but the reason for this had remained unclear.

Oxygen is conventionally inactive. However in these compounds oxygen can actively contribute to the storage capacity. In so doing this results in cathodes with a significantly higher energy storage. This research which involved work at Oxford University laboratories and measurements at Diamond, ISIS and the ALS (Advanced Light Source) has fully quantified oxygen’s role, showing that it forms localised electron holes during the charging process, which enhances battery’s capacity.

Figure 2: Variation of the peak energy change for the Ni, Co and Mn K edges as a function of the state of charge.

This research was a collaborative effort with contributions from the University of Oxford, the University of Kent, the ALS, Diamond and Uppsala University each contributed resources and expertise from a variety of techniques to study high capacity ”Li-rich” cathode Li1.2Ni0.13Co0.13Mn0.54O2. Many techniques were needed to understand these materials fully such as electrochemistry, mass spectroscopy, SXAS and X-ray Absorption Near-Edge Structure spectroscopy (XANES) at B18. Ultimately the measurements at B18 (Fig. 2) allowed identification that transition metal redox could not explain the amount of charge stored. Additionally it was found that oxygen loss in the form of gas measured using mass spectroscopy was also insufficient to compensate for the charge passed. Therefore the charge must be compensated by changes occurring to the electronic structure of the oxygen.

Figure 3: Summary figure showing the that both transition metal and oxygen redox contribute to charge compensation in these materials and that this is occuring on oxygens surrounded by Mn and Li.

This study then went further and examined the oxygen electronic structure more deeply with Soft X-ray Absorption Spectroscopy (SXAS) and Resonant Inelastic X-ray Scattering (RIXS) at the ALS beamlines to observe the battery was charged and discharged. For the first time, researchers were able to show direct quantifiable evidence of the formation of localised electron holes on oxygen. The data collected at B18 could then be correlated with this and showed that these electron holes were surrounded by Mn and Li (Fig. 3). Now that their existence has been understood, more research can be carried out to discover new and more exciting compounds which could result in higher capacities and ultimately could result in mobile phones that last longer between charges or electric vehicles that have a much longer driving range.

P.G.B. is indebted to the Engineering and Physical Sciences Research Council, including the SUPERGEN program, for financial support. The Advanced Light Source is supported by the Director, Office of Science, Office of Basic Energy Sciences, US Department of Energy, under Contract No. DE-AC02-05CH11231.