It is estimated it will cost £117 bn and take more than 100 years to deal with the UK’s legacy of radioactively contaminated waste materials from our nuclear past. This waste includes 2.5 million tons of cementitious materials from power stations: decontamination of this waste greatly reduces its volume and reduces disposal costs enormously and understanding the chemical speciation of radionuclides in the waste is key to optimising decontamination now, and planning for new facilities in the future. During decontamination, knowing the exact nature and form of the radioactive species and how such species adhere to contaminated materials is very important as it allows targeted methods to be developed.

The Microfocus Spectroscopy beamline (I18) at Diamond Light Source was chosen because it can provide information on the chemical form of a large range of elements found in nuclear waste, including strontium and caesium, on the scale of a few microns. Within this research I18 was used to reveal how contaminant strontium released from spent nuclear fuel during residence in a cooling pond, reacts with the coating on the pond walls. By investigating this reaction the chemical speciation of the strontium is identified and the decontamination pathways required in nuclear decommissioning are determined. It was found that strontium in water-filled ponds containing used nuclear fuel rods reacts with the titanium dioxide paint brightener in the paint on the pond walls.

The UK’s fleet of first generation ageing nuclear power stations are currently being decommissioned, producing large amounts of radioactive waste that will ultimately be disposed of in the UK’s deep geological disposal facility (GDF). Waste minimisation, to limit the volume of radioactive waste, is essential to maximise disposal capacity and reduce costs1. This is achieved by effective decontamination and/or segregation of materials to isolate the radioactively contaminated fraction. Identification of the radioactive species in potential waste is essential to inform decontamination pathways. Storage ponds for highly radioactive spent fuel are constructed from concrete with a waterproof coating lining the inner walls and the dominant radioactive isotopes derived from the spent fuel in the ponds are 137Cs and 90Sr. Here a unique, moderately radioactive sample of concrete and its coating, drilled from the wall of a spent fuel pond at the Hunterston A Magnox nuclear power station, Ayrshire, Scotland was examined.

Figure 1: Left: ESEM backscattered electron image showing a section through the Hunterston spent fuel pond wall coating, to the underlying concrete. Layers A and B are paint, layer C, an
undercoat, layer D paint and layer E, chlorinated rubber seals with layer F the underlying concrete. Right: Synchrotron XRF chemical maps collected at I18 corresponding to the layers shown in the
ESEM image. 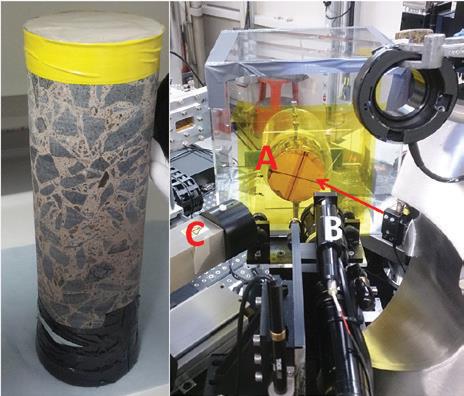 Figure 2: Left: The concrete core (diameter 10 cm) from the Hunterston A spent fuel pond. The yellow tape marks the coated end, contaminated with radioactive strontium and caesium. The dark mafic igneous rock fragments are seen in a cementitious matrix. Right: The radioactive end of the core mounted for analysis on the I18 beamline. A: the core in triple containment; B: fluorescence detector; C: video microscope. The arrow shows the direction of the focussed X-ray beam.

For synchrotron analysis, an area identified as relatively high in radioactivity using autoradiography at The University of Manchester was targeted. At I18, a bespoke, triply contained support structure and rotating stage was used to undertake detailed analysis (Fig. 2). Initially, the distribution of strontium and titanium across the painted face of the core was determined using microXRF. At the X-ray energy (17 keV) used in the mapping, the majority of the signal for these elements came from the top 1-1.5 mm of the core, with the contribution to the signal decreasing with depth. This revealed several points of high Sr concentration and a background of a lower Sr signal. The titanium was also located in concentrated points and, critically, these correlated positively with the high Sr points (Fig. 3). 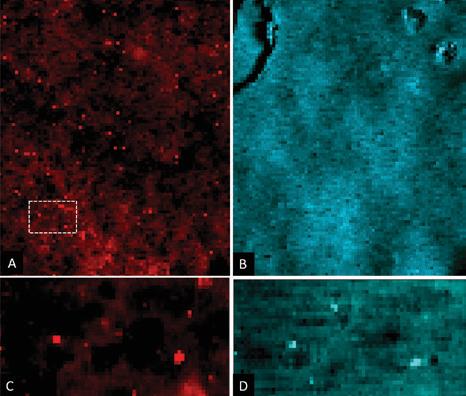 Figure 3: MicroXRF maps collected at grazing incidence on beamline I18 to probe the chemistry of the surface of the pond wall coating. Map A shows the distribution of Sr (red colour, relative concentrations) and Map B Ti (blue) of the same area. Maps C and D are higher resolution mapping of the area marked on A. These maps formed the template for the microXAS analysis

Using the XRF map as a guide, the second stage of the synchrotron experiment determined the chemical nature of the Sr and Ti species present. This was achieved using microfocus X-ray absorption spectroscopy (microXAS) at a resolution of 9 µm2. Ti K-edge X-ray Absorption of Near Edge Structure (XANES) confirmed the Ti was present as the mineral rutile form of TiO2, a white pigment used in paints. Extended X-ray Absorption of Fine Structure (EXAFS) data were collected at the Sr K-edge for the full range of Sr signals derived from XRF mapping. EXAFS revealed the Sr in the high concentration points has Sr-O bonding distances (2.58Å) similar to that found in Sr sorbed to rutile (TiO2), although the number of oxygen atoms coordinated to the Sr was larger (5-8) than expected. Crucially, fitting the EXAFS spectra was greatly improved by adding a shell of Ti atoms at 3.54 Å and Sr-Sr interactions at 3.72Å. These data reveal that the highest concentration of Sr on the pond walls was sorbed to the TiO2 pigment at the paint surface, as a hydrated Sr species of variable coordination; these data are consistent with standards analysed in this work and previous studies2. EXAFS and XANES analysis of the low Sr signals observed in the XRF maps revealed these signals came from the cement in the concrete, derived from the low concentrations of Sr found in limestone.

Although the pond coating was intact in the sample, experiments were conducted to determine the fate of Sr and Cs on reaction with the Hunterston concrete, to explore the consequences if a breach occurred. Tracking the fate of the Cs on the painted surface was difficult as the Cs X-ray signals overlaps with the high Ti X-ray signal from the paint pigment. However, there was no Ti in the concrete and using non-active Cs and Sr, the fate of these elements was determined in sorption experiments combining ESEM/EDAX, microXRF and microXAS. Strontium was sorbed as a hydrated species to the (Ca(OH)2) and (CSH) components of the concrete, consistent with previous studies3,4. By contrast, the Cs was found in significant concentrations sorbed onto the mafic igneous rock clasts in the concrete and specifically was co-located with the minerals olivine and pyroxene. Further investigation revealed the Cs was sorbed to clay-like breakdown products of these mafic minerals.

The study reveals the importance of the reactions between the most common paint pigment (TiO2) and strontium, which is highly significant because 90Sr is a key fission product resulting from nuclear power generation and a focus of spent fuel pond decontamination. The work also demonstrates how synchrotron radiation techniques can inform the optimal management of radioactive wastes from our nuclear legacy, and provides insights in radionuclide interactions with cement and clay minerals which will be major components of the multi-barrier GDF designs for disposal of radioactive waste5.