Mott insulators are a class of materials that should be conductors, according to conventional band theories, but which are insulators particularly at low temperatures. First described in 1937, the proposed explanation was that this anomaly is due to electron electron interactions not considered in conventional band theories. Mott insulators are of interest because some of them, the layered copper oxides, or ‘cuprates’, become superconducting up to high critical temperature when their chemical composition is modified slightly to dope them with additional valence electrons (or ‘holes’). Our understanding of the copper oxide high temperature superconductors is hindered by a lack of electronic structure data from related Mott insulators such as Sr2IrO4, a layered material characterised by a correlation induced excitation gap in a single half-filled band and strong Heisenberg antiferromagnetic coupling of the spin moments, just as the cuprates. Using Angle-Resolved Photoemission Spectroscopy (ARPES) on the I05 beamline, researchers have discovered an electronic state with striking similarities to the ‘pseudopgap’ precursor state of high temperature superconductivity in lightly doped Sr2IrO4. Their conclusion is that anisotropic pseudogaps are a generic property of twodimensional doped Mott insulators, rather than a unique hallmark of cuprate high temperature superconductivity.

Surfaces and Interfaces Village | Beamline I05

Chemical doping is one of the most successful concepts in condensed matter physics and, when applied to conventional semiconductors or band insulators, underlies much of today’s digital electronics. Doping more complex correlated insulators, as they are often found in transition metal oxides, has potential for diverse applications too. Moreover, it often leads to fascinating emergent quantum states. Perhaps the most notable example being high temperature superconductivity in the copper oxides. Understanding how such an intricate collective behavior of charge carriers emerges upon doping the insulating parent compounds remains a daunting challenge.

In this context Sr2IrO4, a spin orbit assisted 5d Mott insulator, has attracted much attention1. As the cuprates, Sr2IrO4 can be described by an effective single band model on a two-dimensional square lattice. Intriguingly, the similarirty between the two systems extends to the magnetic ground state of Sr2IrO4 and the Heisenberg type dynamics of its Jeff = ½ pseudospin. This has led several groups to predict cuprate like superconductivity in Sr2IrO4 Surfaces and Interfaces Village Beamline I05 under electron doping2,3. However, to date, no superconductivity was found in this family. Doped Sr2IrO4 is therefore an ideal material system to separate generic properties of doped Mott insulators from properties specific to high temperature superconductors.

Figure 1: Low-energy excitations in lightly doped Sr2IrO4. a-c) Fermi surface for different doping levels indicated in the figure. The data is shown in the large Brillouin zone corresponding to the Ir - Ir nearest neighbour square lattice. The actual structural Brillouin zone that coincides with the magnetic zone and contains two iridium sites per plane is illustrated by a white square; d) Momentum distribution curves for the highest doping of x=0.05, showing coherent excitations along the nodal direction with clear spectral weight on the backside of the Fermi arcs while the antinodal spectral weight remains incoherent. Adapted from Phys. Rev. Lett. 115, 176402 (2015).

In this work, ARPES experiments at beamline I05 were performed on electron doped single crystals with composition (Sr1-xLax)2IrO4 and x = 0, 0.01, 0.05. The doping evolution of the spectral weight near the Fermi level is shown in Fig. 1. The parent compound (x = 0) shows no detectable states at the Fermi level, consistent with its insulating behaviour in transport. For very light doping with x=0.01 spectral weight appears in the Mott gap. However, the electronic states remain highly incoherent and do not form a well-defined Fermi surface. On increasing the doping to x=0.05, coherent excitations appear along arcs stretching out from the Brillouin zone diagonal, referred to as 'nodal direction' while the spectral weight is weak and devoid of sharp features along the Ir-Ir nearest neighbour, or 'antinodal direction'. This behaviour is strongly reminiscent of the iconic electronic structure with disconnected Fermi arcs observed previously in underdoped cuprates. However, in striking contrast to cuprates, there is a strong intensity on the back side of the Fermi arcs, which the researchers attribute to a rotation of the bulk octahedra, reducing the Brillouin zone in the iridium compounds. 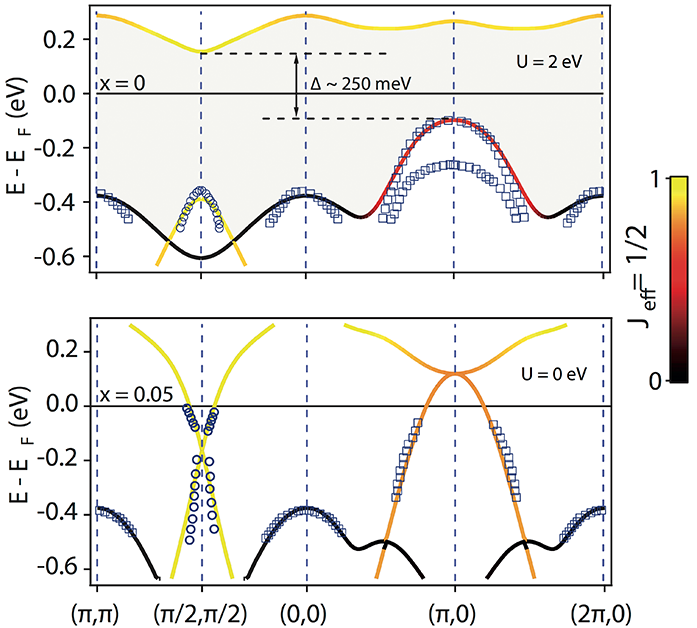 In order to elucidate the origin of this spectral weight dichotomy, Fig. 2 shows the band dispersion extracted from ARPES measurements of (Sr1- xLax)2IrO4 for x = 0 and x = 0.05. For the sake of clarity, the experimental energy bands (blue markers) are complemented by a tight binding (TB) calculation including spin-orbit (SO) and electron correlations (U). In undoped Sr2IrO4 an excitation gap is found throughout the Brillouin zone as expected for an insulator. Upon La doping, marked deviations from a rigid band shift are observed. Most notably, bands with nearly linear dispersion appear at the Fermi level along the nodal direction. Along the antinodal direction, the hole like band at (p,0) shifts towards the chemical potential and its extrapolated band apex moves above the Fermi level (Fig. 2, bottom). This behaviour is well reproduced by an uncorrelated TB calculation (U = 0), indicating a full collapse of the Mott gap. This state corresponds to a large circular Fermi surface of volume 1+2x (where 2x is the concentration of doped carriers on the Ir site), which is backfolded by the √(2) x √(2) reconstruction of the two dimensional square lattice arising from the rotation of the IrO6 octahedra around the c-axis. The suppressed spectral weight around the antinode must therefore be associated with a pseudogap of many-body origin rather than with a band gap. The quantitative analysis of the magnitude and anisotropy of the pseudogap is summarised in Fig. 3 for x = 0.05. Ungapped excitations are restricted to a small stretch of Fermi surface along the node. Moving out along the Fermi surface towards the antinode, the pseudogap opens gradually but is already well developed at the crossing with the Brillouin zone boundary. Thus, the lens-like part of the Fermi surface is broken into two disconnected arcs in striking similarity to the cuprates despite the absence of superconductivity in the iridates. This suggest that cuprate like anisotropic pseudogaps are in general not a manifestation of preformed Cooper pairs, but an intrinsic property of lightly doped low-dimensional Mott insulators with Heisenberg spin-dynamics. 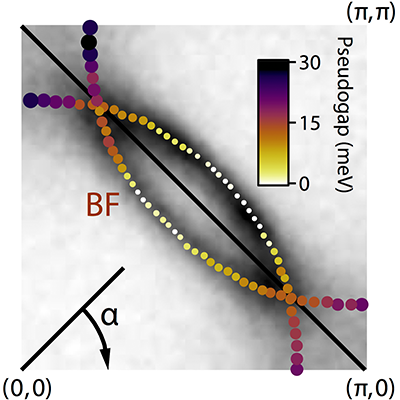 Figure 3: Anisotropic pseudogap for x = 0.05. Fermi surface with the color-coded magnitude of the pseudogap overlaid. Note that the onset of the pseudogap is observed before the apex of the lens-like contour. Adapted from Phys. Rev. Lett. 115, 176402 (2015).

Funding acknowledgement:
This work was supported by the Swiss National Science Foundation (Grant No. 200021- 146995). We acknowledge Diamond Light Source for time on beamline I05 under Proposal No. SI10348.