Treatments for cardiovascular disease, neurological disorders, and pain can be developed by understanding the flow of ions across cell membranes. Potassium 2-pore domain (K2P) channels are important clinical targets, but the mechanisms that control how these channels open and close were not well understood. TREK-2 is an archetypal K2P channel regulated by a range of diverse stimuli, including mechanical changes to the membrane, chemical changes such as pH, biological molecules and many pharmacological agents such as volatile anaesthetics, neuroprotective drugs, and antidepressants such as fluoxetine (Prozac).

The structure of TREK-2 was elucidated using Macromolecular Crystallography (MX) beamlines (I02, I04, and I24) at Diamond Light Source. Crystal structures were determined (up to 3.4 Å resolution) in two conformations and complexed with norfluoxetine (the active metabolite of fluoxetine and a state-dependent blocker of TREK channels). The structures of TREK-2 together with electrophysiology data showed that norfluoxetine specifically bound to the fenestrations of TREK-2 that were only present when the protein was in a ‘down’ conformation. These data also showed that norfluoxetine did not inhibit TREK-2 by directly obstructing the flow of ions, instead it stabilised a less conductive conformation of TREK-2.

By understanding some of the conformations that K2P ion channels can adopt and how these conformations can be influenced, it might be possible to design molecules that specifically bind to individual K2P channel conformations, opening up new avenues for the design of pain relief treatments and neuropsychiatric treatments.

Potassium channels are the most selective of all ion channels, with a conserved filter that is >10,000 times more selective for potassium ions over sodium ions. The subfamily of potassium 2-pore domain (K2P) channels help maintain the normal potential difference of cell surface membranes. K2P channels represent important clinical targets for the treatment of cardiovascular disease and several neurological disorders, including pain and depression1. TREK-2 is an archetypal K2P channel and its function is regulated by physical factors such as mechanical stretch, voltage, and temperature; by natural ligands including polyunsaturated fatty acids such as arachidonic acid (AA); and by intra- and extracellular pH2. 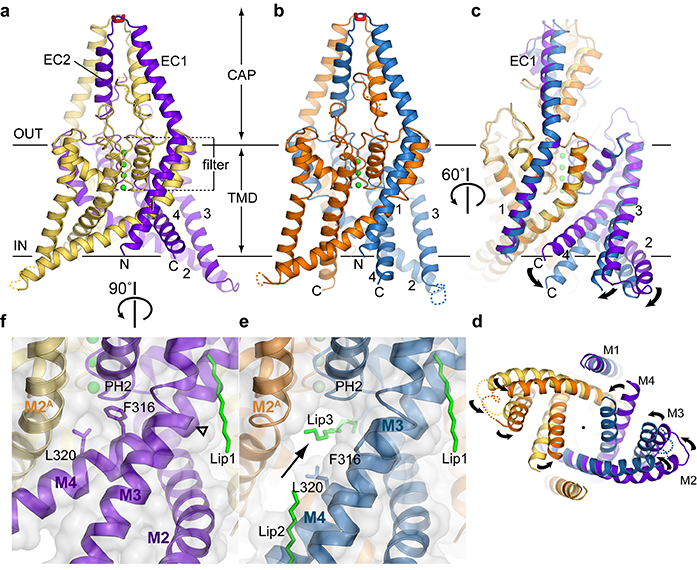 Figure 1: Crystal structures of two conformations of TREK-2. TREK-2 overall fold with views of (a) up-state; (b) down-state; (c) superposition of the states; and (d) superposition viewed from cytoplasmic side of the membrane. Potassium ions are coloured green. (e) Fenestration (indicated with arrow) in the down state, with lipid chain in the vestibule and the fenestration (Lip3). (f) View of up state in same orientation, showing absence of fenestration due to elevation of M4 and insertion of Phe316 and Leu320 side chains into the fenestration. CAP, extracellular CAP domain; TMD, transmembrane domain.

Experiments on model systems demonstrated that TREK-2 activity can also be modulated by many pharmacological agents such as volatile anaesthetics, neuroprotective drugs, and antidepressants such as fluoxetine (Prozac). How TREK-2 is regulated by such diverse signals from inside and outside the cell is poorly understood. The aim of this study was to shed light on this question by elucidating the molecular structure of the protein in the presence and absence of norfluoxetine, the active metabolite of fluoxetine, which is known to only inhibit the protein in certain states3.

Two crystal structures of TREK-2 crystallised in the absence of any inhibitor have been determined: a 3.4 Å structure of TREK-2 in an ‘up conformation’ where the outer transmembrane helices are packed tightly together with no gaps between them and a 3.9 Å structure of TREK-2 in a ‘down conformation’ where these helices relax down, opening up two fenestrations on either side of the ion channel which lead directly to the inner vestibule that lies below the selectivity filter. Each fenestration is occupied by lipid-like molecules which extend into the vestibule without physically obstructing the selectivity filter (Fig. 1).

Similar up and down conformations have been observed in the recently published structures of TRAAK, a close homologue of TREK-24. However in these structures, only the position of M4 helix changed between the up and down conformations, whereas in the structures presented here, a concerted movement between M2, M3, and M4 was observed. A single curved lipid molecule was observed in the TRAAK down structure, in the vestibule below the selectivity filter, physically blocking it.

Figure 2: Prozac bound to TREK-2 in the fenestrations. a) Cross section of surface view of TREK-2 in down conformation, coloured by hydrophobicity [green- yellow–blue].Yellow sticks represent Lip3; b) Complex of TREK-2 with norfluoxetine (NFX). Norfluoxetine is shown in light blue, dark blue, red, and orange for carbon, nitrogen, oxygen, and fluorine atoms, respectively; c) The norfluoxetine binding site, with chains A and B in gold and blue, respectively, and norfluoxetine coloured as in (b).

To test this, electrophysiology studies were conducted on TREK-2 expressed in Xenopus laevis oocytes. The leucine 320 at the opening to the fenestration was mutated to a bulky tryptophan, which interfered with entry into the fenestration. Norfluoxetine inhibition of this mutant protein was significantly reduced compared to the wildtype protein. Furthermore, when norfluoxetine was applied to stretch activated TREK-2, inhibition was greatly reduced. This suggested that mechanical stretching of the membrane activated TREK-2 and stabilised the up conformation, removing the fenestrations which norfluoxetine binds to. 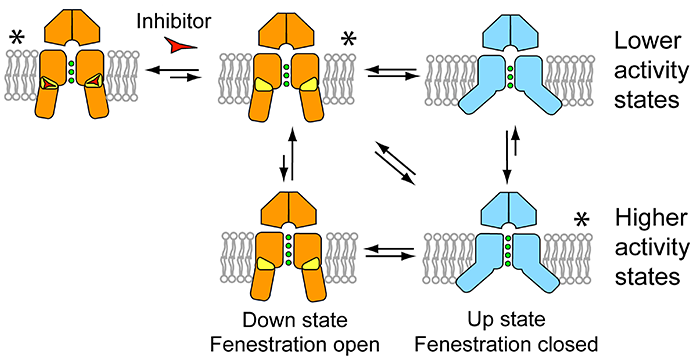 Figure 3: Model of K2P channel gating and inhibition by norfluoxetine. The down state is shown in orange, fenestrations in yellow, and the up state in blue. Inhibitors such as norfluoxetine are represented by a red triangle-like symbol. Higher- and lower-activity states are shown for both conformations, as the filter may gate independently of these larger changes, though with a different probability. Conformations seen in crystal structures are indicated by asterisks.

TREK-2 function is modulated by a wide variety of different stimuli, including mechanical changes to the membrane, chemical changes like pH and biological signals like signalling lipids. It is a mystery how such different information can be processed by a single macromolecule and converted to ion conductivity. Unlike classical potassium channels such as voltage-gated potassium channels, K2P channels lack the intracellular bundle crossing which physically gates ion conductivity by opening and shutting like an iris. The data presented here demonstrate that the K2P channel TREK-2 can be inhibited without physical obstruction of the ion flow path. Instead, movements in the outer transmembrane helices themselves appear to modulate ion conductance directly. Therefore a gating mechanism (Fig. 3) in which movement of the transmembrane helices converts TREK-2 between two functional states.

The down state represents a closed or ‘low-activity’ state stabilised by inhibitors such as norfluoxetine binding within the fenestrations. By contrast, activation by membrane stretch stabilises a ‘higher-activity’ up state that is insensitive to norfluoxetine. Higher resolution structural data is required to elucidate the exact molecular mechanisms involved. It is likely that the larger movements of the outer helices cause smaller movements in the helices flanking the pore which in turn may influence the structure/and or dynamics of the selectivity filter in a type of C-type gating. While it is possible that these two conformations represent the only open and closed states, such a simplistic model is unlikely to explain the complexities of TREK-2 regulation. Nevertheless, this work has clearly demonstrated that movement of the pore lining helices within the membrane creates a mechanism for regulating gating of these channels.