Autophagy is an important waste-disposal function in human cells, identifying and removing disease organisms and damaged organelles - cell structures with specific functions, such as mitochondoria, nucleus, and peroxisome. The exact process by which damaged or mutated organelles are identified and then selected for removal is not yet understood.

The endoplasmic reticulum (ER) is an organelle involved in the production of proteins and lipids. The Macromolecular Crystallography beamline I03 was used to identify the receptor that controls autophagy of the ER; a process known as ER selective organellophagy (ERphagy). The resulting improved understanding of the structure of the receptor allowed the creation of mutated versions that were unable to function, and which prevented autophagy from occurring.

Previous research has shown that mutated versions of this ER-phagy receptor are present in children with sensory neuropathy (nerve damage causing numbness or weakness). By combining structural and functional studies, these new results allowed the successful modelling of transgenic mice with sensory neuropathy to explain the basis of the human disease.

To maintain homeostasis in the cell, the protein degradation system is important to remove mis-folded and unnecessary proteins. Autophagy is one of the most important quality and quantity control mechanisms for regulating intracellular protein and organelle turnover1. It brings about the turnover of cytosolic products by the lysosomal degradation pathway. It encompasses a membrane remodeling event where the double, isolation membrane, engulfs unnecessary cytosolic products, fuses with lysosome and causes its degradation. This bulk degradation system is of paramount importance for maintaining proper cellular functions and homeostasis. Autophagy was originally known as a bulk degradation system, but recently it has been also considered to play a role in substrate selective degradation by selective autophagy.

Autophagy receptors with an LC3 interacting region (LIR) play an important role in selecting substrates for selective autophagy2. LC3 is an ubiquitin-like post-translational modifier, which reversibly conjugates to the phospholipid, phosphatidylethanolamine (PE) on the membrane and thereby localises on autophagosomal membranes. The LC3 family of proteins is therefore also known as autophagosome markers. The transfer of substrates to the autophagosomal membrane is mediated by the interaction between LC3 and autophagy receptor proteins.

Autophagy is a degradation system conserved in eukaryotes. Apart from proteins, the degradation of organelles such as mitochondria, nucleus, peroxisome, and endoplasmic reticulum (ER) is a special feature of autophagy. Such organelles are difficult to digest and degrade by other degradation systems such as proteasomal degradation. This organelle selective autophagy is called organellophagy. Though some receptors for organellophagies are known, no receptors were discovered for ER selective organellophagy (ERphagy). Moreover, how ER is selected for degradation by autophagy remains elusive. In this research, FAM134B was identified as a novel autophagy receptor protein, which specifically controls ER-phagy. Fam134B targets the membrane of ER to autophagosome by the interaction with LC3 (Fig. 1). 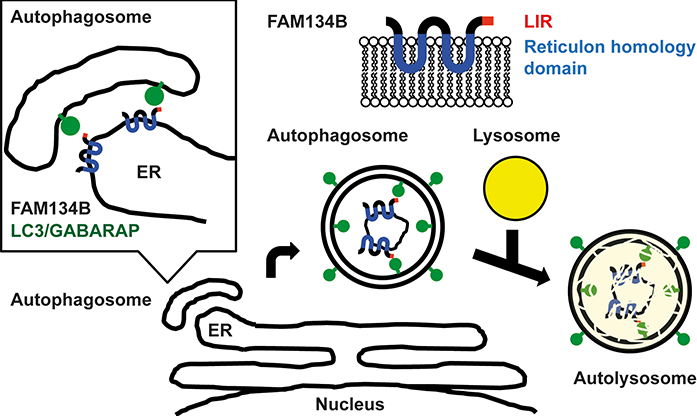 Fig.1 : Model of ER-phagy by FAM134B. FAM134B recruits autophagosomal membrane to ER by the interaction between LIR and LC3/GABARAPs and leads to autophagy.

The direct interaction between FAM134B and LC3 was confirmed in mammalian cells. The interaction is mediated by LIR, because mutations in LIR of Fam134B completely abolish the binding to LC3. In order to understand the molecular mechanism of this interaction, the crystal structure of LC3 in complex with the LIR of Fam134B was determined.

Protein crystallography is one of the most powerful tools for structure determination and it has seen lots of advancements in the past years. However, protein crystallisation is still the remaining biggest hurdle. The ability to crystallise proteins largely depends on the intrinsic property of the protein to make intermolecular contacts. To facilitate crystallisation of LC3 and LIR, an LC3 with FAM134B LIR tandem fusion construct was designed such that it is forced to make intermolecular contacts, giving rise to a higher propensity to crystallise (Fig. 2)4. 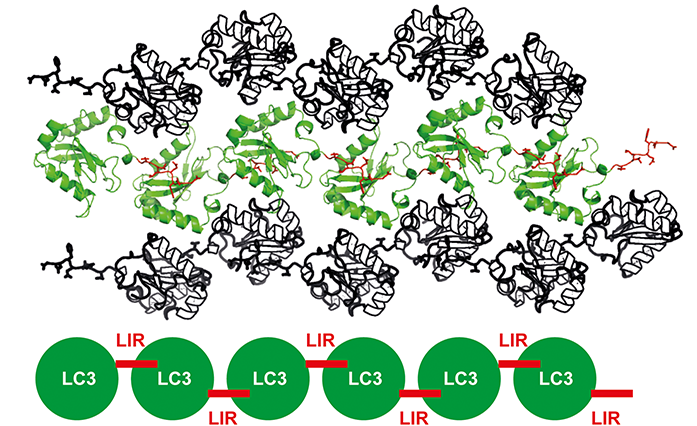 High-quality data sets at macromolecular crystallography (MX) beamline I03 at Diamond were collected and the crystal structure of FAM134B-LIR in complex with LC3 was determined by molecular replacement. Two hydrophobic residues, phenylalanine and leucine of FAM134B LIR were found to be engaged in two hydrophobic pockets of LC3 of a symmetry related molecule (Fig. 3).

This direct interaction between FAM134B LIR and LC3 suggested FAM134B functions as an autophagy receptor protein. To further confirm FAM134B as a receptor of ER-phagy, several in vitro and in vivo functional experiments were investigated. FAM134B was found to localise on ER with the N-terminal and C-terminal LIR region facing the cytoplasm, suggesting the accessible nature of FAM134B LIR for interaction with LC3 on autophagosome in vivo. Moreover, liposome-binding assays showed that FAM134B could bind membranes and change the size of liposomes, indicating FAM134B functions as membrane remodeling protein in vitro. 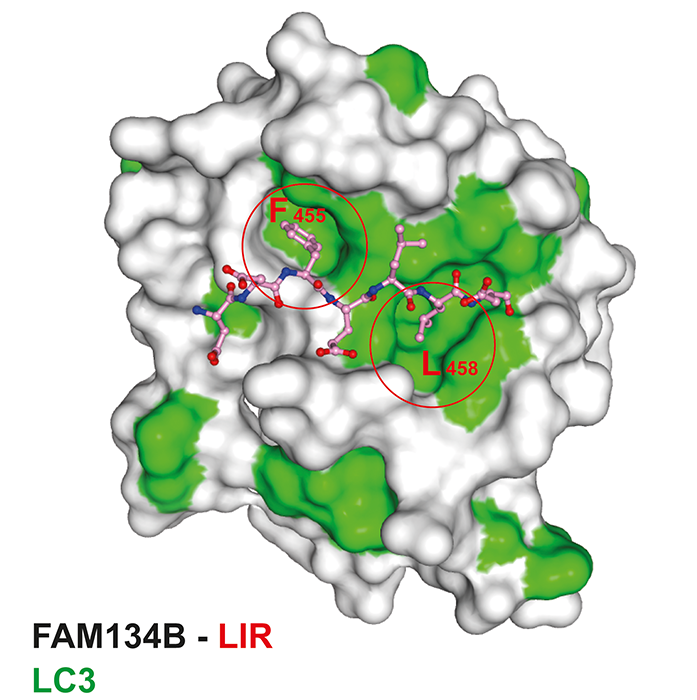 Furthermore, overexpressed FAM134B, but not LIR or reticulon domain deletion mutants, co-localises with LC3 and lysosomes, and leads to ER degradation. In addition, loss of FAM134B affects ER morphology and its turnover by autophagy (ER-phagy) but not bulk autophagy and the other types of selective autophagy. All these data support FAM134B as an ER selective autophagy receptor.

Knock down of FAM134B in mice caused abnormal sensitivity, suggesting that FAM134B might be involved in the regulation of sensory axon maintenance though ER-phagy, future studies will focus on this.

Funding acknowledgements:
This work was supported by grants from the Deutsche Forschungsgemeinschaft to I.D. (DI 931/3-1), the Cluster of Excellence “Macromolecular Complexes” of the Goethe University Frankfurt (EXC115), LOEWE grant Ub-Net and LOEWE Centrum for Gene and Cell therapy Frankfurt and FB 1177 to I.D., and the European Research Council/ERC grant agreement number (250241-LineUb) to I.D.