Time resolved measurements allow scientists to study physical processes that happen extremely rapidly, such as unravelling the interactions that couple the magnetisations of ultrathin layers at the picosecond timescale. Using the pulsed bunches of X-rays from the Diamond synchrotron, researchers were able to watch two different coupling mechanisms compete and collaborate, and how this ultrafast interaction can imprint an angular variation between layers. Deep knowledge of the coupling between different layers in a spin valve is an important building block for the next generation of electronic devices, as it puts a limit on how quickly and efficiently we can read and write information in electronic form. The most important property we must control for applications is the so-called Gilbert damping, which is a measure of the energy loss in the dynamics of the magnetisation.

A spin valve consists of two magnetic layers, separated by a thin barrier layer. In a ground-breaking study, reported in Physical Review Letters, researchers from Diamond Light Source, University of Oxford, and University of York used such a structure to study how two ferromagnetic layers talk to each other. The bottom layer was grown with a regular crystal structure, so that its energy-loss properties vary depending on the orientation of the magnetisation with respect to its crystallographic axes. The top layer, however, was deliberately chosen to be polycrystalline, to avoid any preferred order. A schematic of the structure is shown in Fig. 1.

Figure 1. Schematic of the NiFe/Cr/CoFe spin valve structure used in the investigation, showing how the dynamic interaction of spin pumping passes anisotropy between the two magnetic layers.

The team were able to distinguish two types of coupling: static and dynamic. Static coupling occurs due to interactions with the conduction electrons of the barrier layer, and pulls the ferromagnetic layers to point in the same directions – or opposite to each other. Dynamic coupling is only present when the magnetisations are forced to oscillate, such as exposed to microwave radiation in ferromagnetic resonance (FMR). It results from energy being driven from one layer to the other by the precessing magnetisation, which is called spin pumping effect. The question the researchers asked was ‘what if both interactions are present at the same time?’, with one force trying to align the two magnetisations, and the other force alternately pushing and pulling, depending on the applied field. The only way to neatly and clearly separate these effects is to use a synchrotron-based technique called X-ray detected Ferromagnetic Resonance (XFMR), driving precession in the top layer and looking for a response in the bottom layer.

Kitted out with their portable octupole magnet system at I10, the Beamline for Advanced Dichroism Experiments (BLADE), the scientists made use of the bunched structure of Diamond’s light source, which produces 500 million X-rays pulses a second. As the resonant absorption of X-rays is element-specific, it becomes possible to consider what a given material is doing. In this case, it permits independent scrutiny of the top and bottom ferromagnetic layers – composed of nickel-iron and cobalt-iron alloys respectively. By exploiting the X-ray Magnetic Circular Dichroism (XMCD) effect, the researchers used the circularly polarised X-rays to measure the precession of the magnetisation of each individual layer. Carefully timing the phase of the oscillation with respect to the periodic bunch arrival, the team was able to measure time- and layer-resolved magnetisation dynamics. This combination of XMCD and FMR forms the powerful XFMR technique. The transfer of energy between layers can be directly observed, and a careful examination of the characteristics of the motion of the bottom layer reveals the contributions of the two couplings. 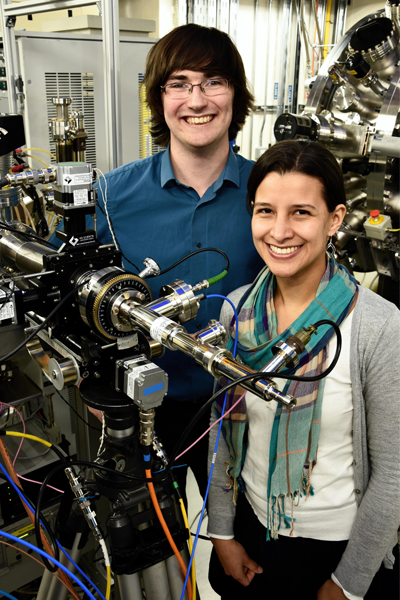 Image: Dr Alex Baker and Dr Adriana Figueroa-Garcia on I10 with the octupole magnet system

The results showed that the static and dynamic coupling cooperate to induce larger phase shifts than expected; instead of just adding together, one opens up more space for the other to work in. However, this turned out to be only the starting point, as the team also studied what happens when the applied magnetic field is rotated with respect to the crystallographic axes. Alex Baker, a joint student between Diamond’s magnetic spectroscopy group (MSG) and the University of Oxford takes up the story:

“We were expecting to confirm that the results were the same irrespective of angle, but in fact we got quite a shock! The dynamic component of the interaction got a lot bigger as we rotated the field around in the bottom layer. It turns out that the size of the dynamic interaction depends strongly upon damping in the absorbing layer. We found that the spin pumping effect can imprint angle dependences between layers, leading to an angular variation of the energy transfer and loss, even in disordered materials.”

In a field hungry for new ways to control and optimise magnetisation dynamics, the discovery of a straightforward way to modify interaction strengths is of key importance. Angular control of coupling and relaxation is at the forefront of theoretical and experimental research, and the surprising nature of the finding shows that systems we thought well understood are still hiding a wealth of secrets. New ideas based on engineering structures with configurable anisotropies, such as through nano-patterning or strain control, can be developed based on this finding. This research highlights the unique perspective that synchrotron radiation can offer the field of device physics, as it offers unparalleled ability to resolve ultrafast dynamics, all in an element-specific way.