First proof of the ‘surface <i>trans</i>-effect’

The trans-effect is a well-known phenomenon in coordination chemistry relating to organic ligand substitution. When an organic ligand is bound to a metal centre, it can cause the ligand directly opposite it (in the trans position) to be more liable to substitution, which in turn can change the charge of the compound. It applies to organic ligands, which tend to exhibit strong electronic properties. Affecting both square planar and octahedral complexes, the trans-effect can be exploited to create compounds of a particular desired structure.

Recently researchers have suggested that metal surfaces coordinated to a metal-organic complex could behave in a similar way. In a study published in Chemical Science, an international group of researchers have tested this theory and provided evidence showing that metal surfaces can indeed exhibit trans-effects. The team used the X-ray Standing Waves (XSW) technique at the Surface and Interface Structural Analysis beamline (I09) to accurately measure bond distances when a metal-organic complex was adsorbed onto a metal surface. Their results corroborated the idea that the metal-surface bond length changes depending on which ligand is bound at the trans position, proving the so-called ‘surface trans-effect’.

The trans-effect is caused by organic ligands with strong σ-donor or-π acceptor electronic properties. Strongly trans-directing ligands weaken the ligand-metal bond that lies directly opposite, in the trans position. This causes the metal-ligand bond length in the trans position to lengthen, and thus become more liable to substitution.

Recently researchers have postulated that metal surfaces, when bound to metal-organic complexes, could also act like ligands, and demonstrate a similar trans-effect. Termed the surface trans-effect, evidence has been found that adsorbate supporting metal surfaces can affect the electronic properties of an adsorbed metal coordinated centre. Researchers predict that, should the surface trans-effect exist, it would cause the bond length between the coordinated metal centre and surface it is adsorbed to change depending on the ligand in the trans position but until now this had not been measured.

To resolve the bond distances, an international team of researchers from Diamond and universities in Germany, France, the UK, and the USA, turned to the X-ray Standing Wave (XSW) technique at Diamond’s I09 beamline.

The XSW technique allowed the team to accurately measure the bond distances between a metal surface and variously substituted metal-organic complexes, even though the concentration of complex bound to the surface was very low. It also provided a way of measuring distances in a system that was vertically but not laterally ordered, as while the metal centres were a similar distance from the surface they did not adsorb into a well-defined site on the surface.

The team chose to study iron phthalocyanine (FePc), adsorbed onto a silver (Ag) surface before introducing ammonia and then water to the trans position in the complex. The results showed that the bond distances between the Fe centre and Ag surface, correlated with the idea of a surface trans-effect. The distance between the surface and Fe centre increased by 0.19 ± 0.07 Å after the absorption of ammonia, which exhibits a relatively strong trans-effect, while it increased by 0.07 ± 0.04 Å after the absorption of water, which exhibits a weaker trans-effect. 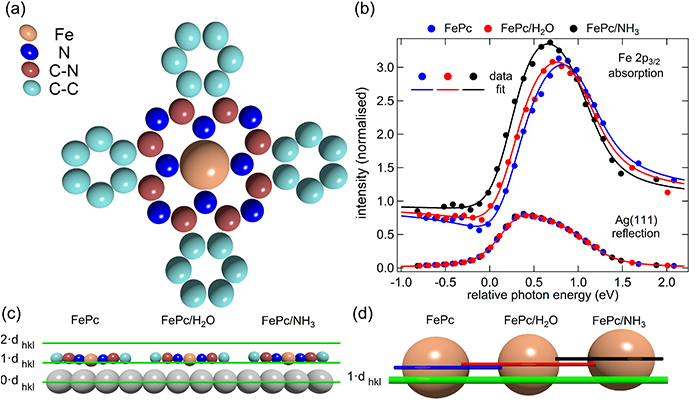 Figure 2: Iron phthalocyanine (FePc – shown in (a)) was exposed to both water and ammonia resulting in (b-d) the iron atom enclosed within the molecule changing in height above the sample, due to the surface trans-effect. As water is a weaker trans-ligand than ammonia, replacing ammonia with water results in the iron going closer to the surface.

The team compared their measurements to those they calculated theoretically by DFT and found a remarkable similarity between the two.

“We looked at FePc adsorbed to Ag and saw electrons pushed along the sigma direction. The shape of the bonding was very similar to the other complexes, so that told us that it’s actually a trans-effect,” said David Duncan, the beamline scientist at I09 who was part of the research team.

The team also found that the trans-effect was not coming from a single surface atom but from the whole surface: “Experimentally the molecule we put on the surface has no registry with the atoms below it, which means that it doesn’t have a well defined location. Some of the molecules might have a silver atom below them, some might be bridging two silver atoms, some might have an arbitrary position,” said Duncan.

Despite where the FePc lay, the height above the silver were the same, showing the directional interaction of the trans-effect was not a result of a single Ag atom, but instead the entire metal surface. The researchers suggest that the trans-effect is being caused by sigma donation from the delocalised metal electrons in the surface, an idea that is backed up by their theoretical calculations. 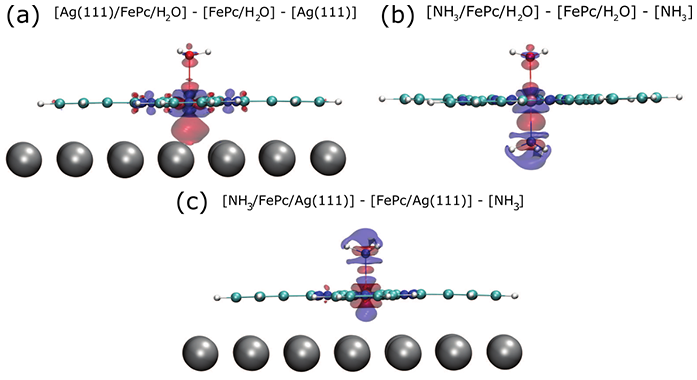 Figure 3: The redistribution of the electrons around the iron centre of the molecule due to introducing the (a) silver surface or (b) an ammonia molecule opposite to a water molecule. The introduction of both the silver surface and the ammonia resulted in a very similar change along the water to iron to silver/ammonia bonding direction – indicative of a trans-effect. Also shown (c) is the effect of introducing the silver surface opposite to ammonia, resulting in a very similar “parachute” shape around the hydrogen atoms of the ammonia molecule.

Although the team’s work is inherently fundamental, they hope this additional understanding of the surface trans-effect can be used in other areas of research. Metal phthalocyanines can be used as gas sensors, as they display distinct electronic changes upon ligation to different gases. The surface trans-effect suggests that this ligation would have a direct effect on the metal substrate, enchancing the signal of the gas sensor. However, for metal-organic catalysts adsorbed to a surface the surface trans-effect would suggests a drastic change in activity due to the underlying substrate, which may require adsorbed metal-organic catalysts to be made of more reactive materials.

To find out more about the I09 beamline, or to discuss potential applications, please contact Principal Beamline Scientist Dr Tien-Lin Lee: tien-lin.lee@diamond.ac.uk.

All figures courtesy of Diemel et al. (2016) – Published by The Royal Society of Chemistry.