An international team of researchers have been using Diamond Light Source to examine what could be the future of computer storage, with results published in Science. The action centres on a new device made from a novel antiferromagnetic material, which holds the promise of ultra-high density data storage. It uses spintronics rather than electronics to store the data making it resistant to external magnetic fields, and external radiation, and it remains stable when the power is turned off. Furthermore, this all happens at room temperature in a material that is relatively easy to make. This is a combination of features that the data storage industry values very highly.

We have known about and studied antiferromagnetic materials for decades, but they were not thought to have any potential as magnetic storage media. The reason is down to the way their magnetism is aligned on the atomic level. Each atom in a magnetic material has a property called ‘spin’ which can be thought of as a tiny bar magnet, with a north and a south pole. In ferromagnetic materials, the atomic spins are all lined up in the same direction, which is why they have a measurable magnetic field and act as large scale magnets. The regions in antiferromagnets are, by contrast, arranged head to toe as shown in Fig. 1. This means that the spins effectively cancel each other out and they have no external magnetic field. 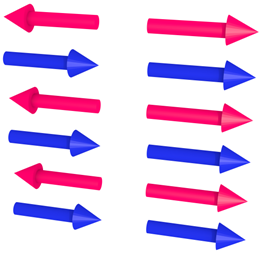 Figure 1: Schematic depiction of the spin ordering in an antiferromagnet (left) and a ferromagnet (right).
A normal data bit is stored by using a current to flip the orientation of the spins. This is not possible with antiferromagnetic materials but Dr Peter Wadley and his colleagues have tackled the problem a different way; a spintronic approach that rotates pairs of spins rather than flipping them end over end. Dr Wadley said: “If you turn them all together they turn easily, whereas individually they don’t move. The physics is beautiful but complex yet the practice is relatively simple. We use an electric current to write, that is turn, a bit and then a smaller current to read it.” Crucially, the current density required is in the same order as that used in commercial data storage devices.
Watching them spin
The evidence for this comes from an experimental single bit storage device that Dr Wadley and colleagues have been investigating at Diamond. It is a thin film of antiferromagnetic copper manganese arsenide (CuMnAs) grown by molecular epitaxy on a semiconductor base at the University of Nottingham. The team has shown that they can read and write to this device, but they needed more information on the behaviour of the affected regions. The lack of external magnetic field makes it very hard to see what is going on. “There is an electrical signal but it is very faint,” said Dr Wadley. Instead the team used X-ray magnetic linear dichroism photoemission electron microscopy (XMLD-PEEM) available at Diamond. 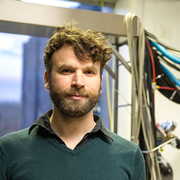 Dr Peter Wadley, Research Fellow at the School of Physics and Astronomy, University of Nottingham.
The CuMnAs film was exposed to a beam of highly tuned monochromatic polarised X-rays. This displaced electrons from the material which were then detected by an electron microscope. The resulting images, essentially black and white photos, showed the magnetism on the surface of the material (Fig. 2). By comparing images before and after writing a bit of information, the researchers clearly showed that the spin orientation of the domains changed in response to the pulse of current, supporting the electrical readouts from the storage cell. Further experiments were conducted under magnetic fields up to 12T (enough to completely wipe a conventional magnetic storage device) and at temperatures between 150K and 304K, and in both cases the information remained intact. 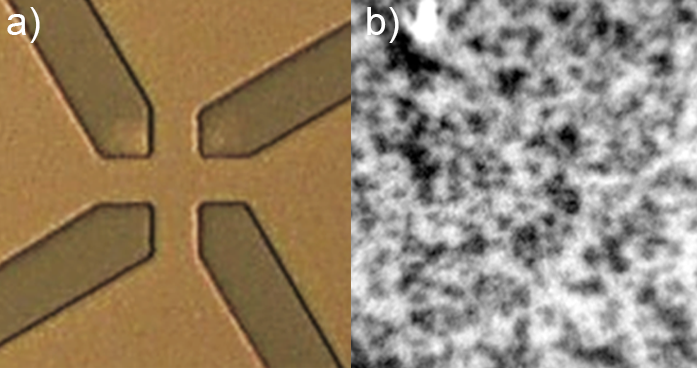 Figure 2: (a) Optical microscopy image of the device used for PEEM imaging. (b) XMLD PEEM image of the domain structure in the central region of the cross. Vertically aligned spin domains appear black and horizontally aligned domain appear white.
Ticking the data storage boxes
The new antiferromagnetic material has a range of properties that make it very attractive for use in data storage. It is not adversely affected by either temperature or strong magnetic fields, meaning it is a very robust method of storing information. The fact that it does not have any external magnetic field means that it cannot be measured by an external device. This makes it very secure as well as robust. On a smaller scale, the fact that individual regions do not have an external magnetic field means that they can be packed together far closer than current magnetic storage devices. In these the domains interfere with each other unless separated by a minimum distance. And finally, it has a very high theoretical switching speed, anything up to a 1,000 times faster than current magnetic media.
Perhaps the most intriguing idea is that this CuMnAs film is just one of many possible antiferromagnets and is unlikely to be the best. It has been a very valuable experimental tool, but is the only one to be tested in this way to date. It is perfectly possible that material scientists will be able to produce other antiferromagnets with better properties, adding to the already vast potential of this research.
For more information about using the Nanoscience beamline (I06) or to discuss potential applications, contact Prof Sarnjeet Dhesi: dhesi@diamond.ac.uk