More high-impact work on I05

Discovering the secrets of oxide electronics

The fate of Fröhlich polarons in SrTiO3

Strontium titanate (SrTiO3) has been very well studied over the last decade, and we can easily measure many of its unusual properties such as superconductivity at very low carrier density. But until now we have lacked an understanding of what gives rise to this material’s special properties. A team of researchers using Diamond’s Angle-Resolved Photoemission Spectroscopy beamline (I05) to observe the behaviour of the electrons in this complicated material, have demonstrated that it depends strongly on carrier density. The results published in Nature Materials will help develop our theoretical understanding of oxide materials.

A great deal of research is being carried out in the field of oxide electronics, investigating this virtually unlimited source of materials with exotic properties, motivated partly by the search for a replacement for silicon as we approach the limits of what we can do with the current generation of electronics. Although we can easily measure the properties of these materials, their high-quality production is a challenge for materials science, and developing models to explain their properties is challenging for theoreticians. Observing electron-phonon interactions, thought to be the underlying cause for superconductivity in most materials, is a very important area of research for condensed matter physics. 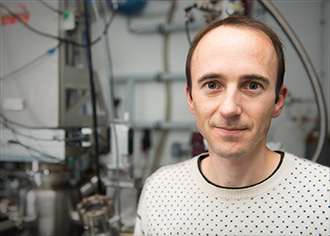 Professor Felix Baumberger from the University of Geneva’s Department of Quantum Matter Physics, and the Spectorscopy of Novel Materials Group at the Paul Scherrer Institute.

SrTiO3 is widely used as a substrate for growing oxide films, but is a highly fascinating material in its own right. A band insulator, it becomes a superconductor when doped with less than 1 excess electron per 104 Ti ions, implying an exceptionally strong attractive interaction among diluted carriers. In combination with other materials, it plays a crucial role in creating novel physical properties, for example superconductivity above the temperature of liquid nitrogen in a single monolayer of FeSe grown on a SrTiO3 base. This critical temperature is higher than in any iron-based bulk material, suggesting a key role for the SrTiO3 substrate.

Professor Felix Baumberger and a team of researchers from the Paul Scherrer Institute, Diamond Light Source, and the University of Geneva used Angle-Resolved Photoemission Spectroscopy (ARPES) on I05 to study the behaviour of electrons in SrTiO3, and found that it depends strongly on carrier density. With a high number of electrons they saw relatively normal behaviour, but with a low number of electrons the material ‘does strange things’. At low carrier density, the electrons are accompanied by a dynamic lattice deformation, forming a new composite quasiparticle called a Fröhlich polaron, which moves in a band-like fashion through the solid, but with an increased effective mass. 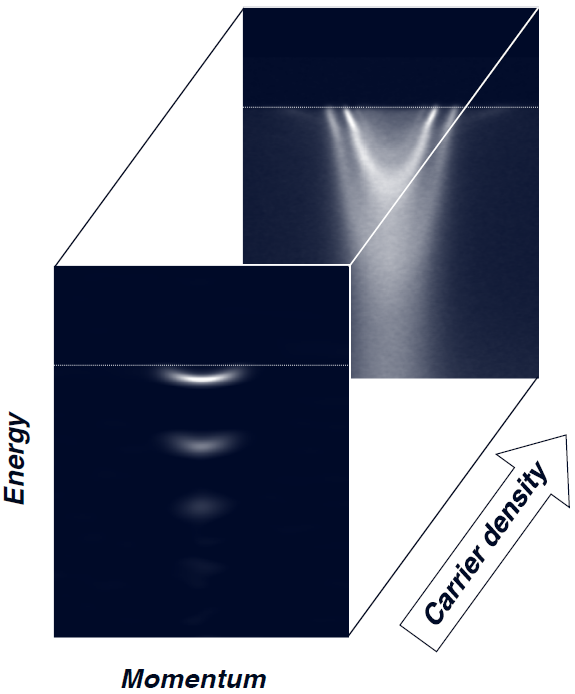 Visualisation of the complex electron phonon interaction in SrTiO3 by ARPES. The series of replica bands at low carrier density is an unambiguous spectroscopic fingerprint of Fröhlich polarons. With increasing carrier density, the replica bands evolve into a subtle kink structure in much wider electronic bands. This shows directly that the polarons dissociate as the doping is increased.
The researchers prepared a bare surface of SrTiO3 to host a 2D electron liquid (2DEL) with tunable carrier density. The long-range interaction between electrons and phonons (quantised lattice vibrations) that creates Fröhlich polarons is considered favorable for superconducting pairing, and by increasing the carrier density, the team was able to monitor how Fröhlich polarons dissociate into electrons and phonons that interact only weakly and over short distances. Their findings provide, for the first time, a microscopic basis for understanding why superconductivity in different SrTiO3 based systems appears at a certain carrier density and disappears again as more carriers are added.
The I05 beamline & ARPES
According to Prof Baumberger, the Swiss Light Source and Diamond are the best sources for ARPES in the world, which is why they were chosen for this work. He was full of praise for the beamline scientists at Diamond, who “did a phenomenal job of building the machine. Everything worked - although there are hundreds of things that have to be done for the setup, they didn’t forget anything.” Their professionalism allows visiting scientists to concentrate on their research and avoid unnecessary delays.
What’s next?
These direct observations of electron-phonon interactions are crucial to developing new condensed matter physics theories - the behaviour of oxide materials is only partly explained by current models, and we’re at the beginning of developing an understanding of them.
Prof Baumberger and his team are continuing their research by comparing their results with other related materials, including titanium dioxide.
To find out more about using the I05 beamline, or to discuss potential applications, please contact Principal Beamline Scientist Dr Moritz Hoesch: moritz.hoesch@diamond.ac.uk.