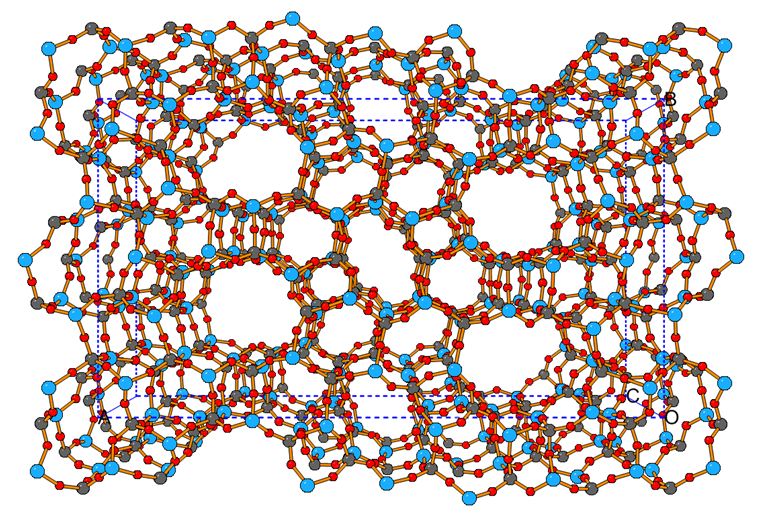 In the search for efficient catalysts, zeolites are a popular choice because of their impact on innovation in catalytic methods and separation. Additionally they have applications in dehydration, deodorisation and refining, particularly in the petrochemicals industry. Diffraction data collected at Diamond’s High Resolution Powder Diffraction beamline (I11) have aided in the elucidation of the molecular structure of an aluminophosphate (AlPO4-based) molecular sieve, which is crystallographically the most complex zeolite structure ever solved.

The number of zeolite framework type codes (FTCs) is monitored by the Structure Commission of the International Zeolite Association, and, at the time of publication of this crystal structure, 218 FTCs were recognised. Of these, 44 are known to occur as AlPO4-based frameworks, which show considerable structural diversity. However the structural complexity is much lower than that of silica-based materials because of the crystal-chemical requirement that AlO4 and PO4 tetrahedra must alternate so that only even-numbered rings are present in the framework. In contrast, the structures of the most complex zeolites that have been solved typically contain odd-numbered rings such as 5-rings.

A collaborative project between South Korea, China and the UK enabled scientists to determine the structure of a medium-pore AlOP4-based molecular sieve. The researchers used a combination of rotation electron diffraction tomography, synchrotron X-ray powder diffraction, and computer modelling to solve the structure. X-ray diffraction was performed at Diamond beamline I11 using monochromated X-rays of λ = 0.825621 Å. The synthesis and characterisation of the new molecular sieve, denoted PST-6, is reported in a publication dedicated to Professor In-Sik Nam in Angewandte Chemie. Solid state 27Al and 31P NMR spectra indicate that PST-6, which was obtained from calcination of the novel AlPO4 phase PST-5, has a fully tetrahedrally coordinated framework. Refinement using synchrotron diffraction data from a sample heated at 300°C under vacuum provided a close fit to computer modelling using direct methods.

Prior to this publication, the most complex zeolite structure solved is the large-pore zeolite ITQ-39, which has two polymorphs with 28 crystallographically-distinct tetrahedral sites (T-sites). By comparison, the most complex aluminophosphate zeolite published contained 12- distinct T-sites. PST-6 has 36 crystallographically-distinct aluminium and phosphorus atoms of equal multiplicity and 72 such oxygen atoms in its asymmetric unit. The pore system consists of two parallel, elliptical 10-ring and 8-ring channels running along the c-axis, which are separated by framework walls perpendicular to the a- and b-axes.

“The X-ray diffractometer and multi-analysing crystals detector on I11 offered high resolution and good counting statistics that enabled structure solution of this new microporous solid. The power of combining new electron microscopic methods and computer modelling with high resolution powder diffraction opens up to our study a wide range of novel zeolites, prepared through innovative new syntheses, that have great potential as active and selective adsorbents and catalysts.”

Professor Paul Wright from the University of St. Andrews

Excluding SSZ-57 (*SFV), a modulated zeolite with an “idealised” unit cell, this compound is the most crystallographically complex zeolite structure obtained to date. It is also the first molecular sieve to feature a one-dimensional system of two parallel 10- and 8-ring channels, demonstrating that highly complex zeolitic systems can arise from arrangements of even-numbered rings only. This research indicates that there may be many more aluminophosphate molecular sieves with high numbers of crystallographically-distinct sites, offering the potential for new highly active catalysts and dehydrating agents.