I10 in the Annual Review

Are the Cr dopants in the Bi2Se3 topological insulator divalent or trivalent?Read More.

Scientists at Diamond Light Source have explored the interface between iron and graphene, with findings that illuminate the prospect of graphene-based transistors. Results published in Scientific Reports suggest a well-maintained ferromagnetic order of the interface up to room temperature. Furthermore, the researchers have observed reduced magnetic moments of the epitaxial iron (the crystalline overlayer covering the graphene) compared to iron in its normal bulk state. Yet the magnetism observed was still sizable enough to indicate its potential for spintronic applications.

Successful spin injection into graphene would make it a key contender in the race to develop materials suitable for quantum computing, and the junction between a layer of graphene and a layer of iron presents a potential avenue to be exploited. However, the magnetism at this interface is not well understood. The X-ray magnetic circular dichroism (XMCD) technique afforded by the I10 beamline ‘BLADE’ (Beamline for Advanced Dichroism Experiments) is one of the most powerful tools on offer to explore the surface/interface magnetic and chemical properties. The researchers from the University of York, University of Science and Technology of China, the Renmin University of China, and Diamond were able to observe a suppression of the Fe magnetisation caused by a hybridisation between the Fe and C orbitals, which led to an sp-orbital-like behaviour of the Fe 3d electrons due to the presence of the graphene.

"XMCD has many unique advantages compared to lab-based spectroscopies" explains Dr Wenqing Liu, Team Leader at York. "It is sensitive to materials as thin as one monolayer or less, and spin and orbital moments can be obtained separately, something that has strong implications for fundamental physics."
In addition to the measurement performed at Diamond, the researchers have also used the molecular beam epitaxy (MBE) technique for the sample preparation, Raman scattering spectroscopy for the graphene characterisation, and supercomputers for first-principle simulations. The Raman measurement and first-principle simulations provide further experimental and theoretical evidence to support the XMCD results obtained at Diamond Light Source.
Fine tuning
The 2D and highly ordered nature of graphene makes it a prime candidate to become the key material in proposed ‘spin-transistors’ for quantum computing. However, in its pristine state, graphene exhibits no signs of conventional spin-polarisation and up until this moment, no experiments had shown a ferromagnetic phase of graphene. "We believe that our findings help to plug this gap" continues Liu. "Based on the encouraging results that we have obtained, future work to explore the tuning of the spin-polarised band structure of both the Fe and graphene via the interface engineering will be of great interest and have strong implications for both fundamental physics and emerging spintronics technology." 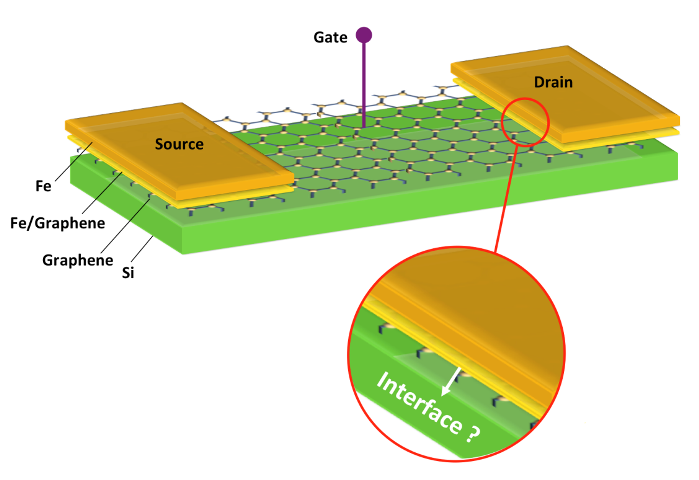 Illustration of the Fe-graphene-based spin field effect transistor and its interface.
The researchers observed strong dichroic XAS spectra of Fe, suggesting a well-maintained ferromagnetic order of the Fetop/graphene interface up to room temperature. They obtained a reduced but still sizable magnetic moment of the monolayer Fe on graphene, i.e., (1.23 ± 0.1) μB/atom, which is corroborated by first-principle calculations. The observed suppression of the Fe magnetisation is attributed to the strong hybridisation between the Fe 3dz2 and the C 2pz orbitals, leading to a greatly reduced exchange splitting, and the sp-orbital-like behaviour of the Fe 3d electrons due to the presence of graphene.
To find out more about using the I10 beamline, or to discuss potential applications, please contact Principal Beamline Scientist Paul Steadman: paul.steadman@diamond.ac.uk
Related publication
Liu WQ, Wang WY, Wang JJ, Wang FQ, Lu C, Jin F, Zhang A, Zhang QM, van der Laan G, Xu YB, Li QX & Zhang R. Atomic-Scale Interfacial Magnetism in Fe/Graphene Heterojunction. Sci Rep. 5, 11911, (2015). DOI: 10.1038/srep11911