Spintronics potential at the surface of topological insulators 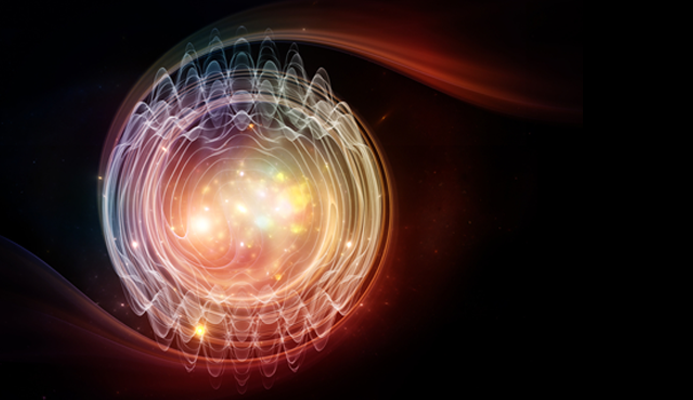 The tremendous potential of topological insulators (TIs) for applications in the next generation of device technology has been recognised for some years, due to their superior conductivity and spin selectivity, but finding a way to employ their exciting properties has thus far been difficult. With results recently published in the journal Scientific Reports, researchers working at Diamond Light Source have demonstrated that TIs can be used to separate the spin and charge information carried by electrons, opening up the potential for ultra-fast, energy efficient spintronics devices.
Incorporating this novel class of materials into a traditional spin valve (as shown in Fig. 1), the team used time- and element-resolved measurements of magnetisation on BLADE (Beamline for Advanced Dichroism Experiments) at Diamond to detect the subtle clues of a dynamic coupling, mediated by the topologically-protected surface state. The team, from the Magnetic Spectroscopy Group (MSG) at Diamond and the Department of Physics at the University of Oxford, used the MSG’s Portable Octupole Magnet System in conjunction with BLADE (beamline I10) to study the response of materials in contact with a TI, rather than direct observations on the TI itself.
Alex Baker, joint student between the MSG and Oxford, and first author on the resulting paper, explains: “We’ve shown that you can incorporate topological insulators into the fundamental ideas of what the building blocks of a computer should be. Rather than studying these fascinating materials in isolation, we’ve brought them into the kind of environment where they will one day have to be used.” 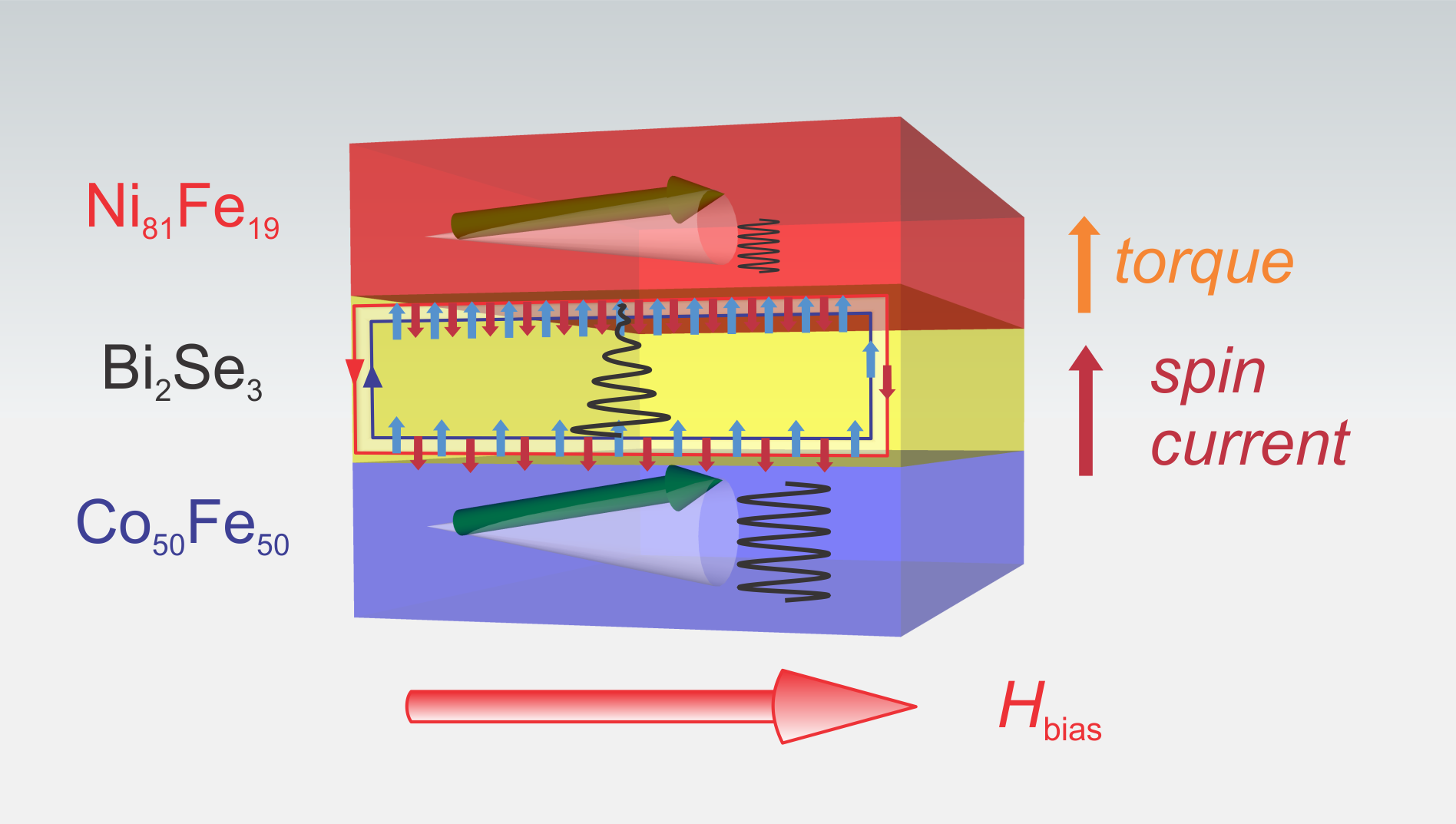 Figure 1: Schematic of the device, showing the TI Bi2Se3 placed between two different FM layers. The surface state is indicated by the small up- and down-arrows, showing counter-propagating spin-momentum locked conduction. The precession of magnetisation excited around the static bias field drives a pure spin current from the CoFe layer  through the TI Bi2Se3 into the NiFe layer, exerting a spin transfer torque.

In a TI a strong spin-orbit coupling leads to an electronic band inversion, with the conduction band sitting above the valence band. This leads to the formation of a surface state protected by time-reversal symmetry, whereby spin-up and spin-down electrons are segregated (see Fig. 2), making them flow in opposite directions and preventing scattering between the two channels. This suggests the potential for high-efficiency spin or charge transport.
The team at Diamond took this concept and applied it to create a topological insulator pseudo-spin valve. Spin valves are one of the fundamental concepts in spintronics. Here, two magnetic layers are separated by a non-magnetic spacer layer that can filter the spins, allowing one to tune the types of interaction that can exist. Traditional spacer layers include chromium or copper, but here a film of the TI Bi2Se3 was used, creating a unique structure. 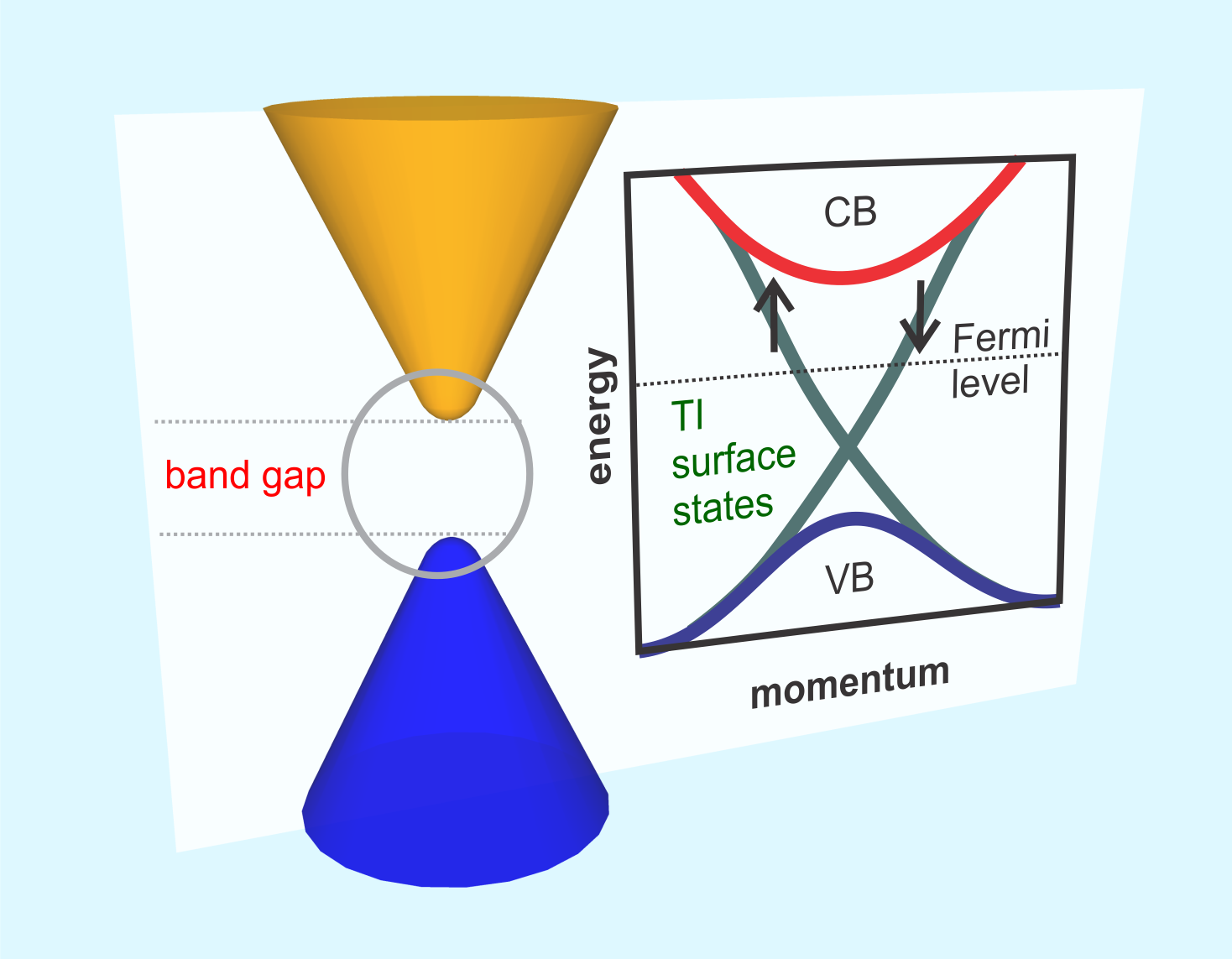 The key challenge presented by such layered structures is finding a way to measure each component individually. With the whole device measuring less than 100 nm thick, traditional resonance or magnetometry techniques offer no respite to resolve the layers separately. This is where Diamond, specifically BLADE (beamline I10), comes in. As the resonant absorption of X-rays is element-specific, it becomes possible to consider what each specific material is doing. In this case, allowing an independent scrutiny of the two ferromagnetic layers – composed of cobalt-iron and nickel-iron alloys, respectively. By exploiting the X-ray Magnetic Circular Dichroism (XMCD) effect, the researchers used circularly polarised x-rays to measure the alignment of the magnetisation of each individual layer.
However, it was not sufficient to only measure the static properties of the TI-pseudo-spin valve. These devices operate at high frequencies, with the magnetic layers brought into resonance by a driving radiofrequency field in an applied magnetic field. This allows the generation of a pure spin current, whereby the angular momentum of electrons is transported independently from its charge. The aim was to measure the transmission of this angular momentum current flowing through the protected surface states of the TI, by looking for induced resonances in the second magnetic layer.

Figure 3: (a) Illustration of the experimental configuration for the measurement of time resolved (TR) XMCD. The magnetisation of the stack about the applied field Hbias is driven by the radiofrequency field, HRF. (b) TR-XMCD results for NiFe continuously driven at 4 GHz for the CoFe(30)/Bi2Se3(8)/NiFe(30) sample (thicknesses in nm). Varying static bias field is indicated by colour of lines, offset for clarity, showing increase in amplitude and phase shift across resonance at a field of 14 mT.

Diamond does not actually produce a continuous beam of X-rays; instead they arrive in periodic bunches, with half a billion such bursts every second, compressed into tens of picoseconds. By carefully timing the phase of the angular rotation with the periodic bunch arrival, the team were able to measure time- and layer-resolved magnetisation dynamics with unprecedented accuracy (Fig. 3), mapping the precession of the magnetisation as a function of time for different magnetic fields.
These pioneering measurements demonstrated, for the first time, that a high-frequency coupling can exist through the surface state of a TI, allowing indirect communication between magnetic layers and opening up a vast array of potential device applications. The spin mixing conductance of the ferromagnet-TI interface, a measure of their ability for spin-selective transport, is much greater than that of conventional materials, proving the feasibility of TI spintronics.
Alex Baker concludes: “This is a cross-fertilisation between topics and techniques that has not been widely considered before, but which is steadily gaining importance around the world. It’s exciting to be part of an entirely new field, pushing both materials and methods in new directions.”