Liquid crystals with a twist

'Chirality’ is derived from the Greek word for hand, and is given to describe something that cannot be superimposed on its mirror image form. Left and right hands can be described as chiral because they are non-superimposable mirror images – if you hold out both hands with palms facing upwards and lay them directly on top of each other, the thumb of one hand would be over top of the little finger. 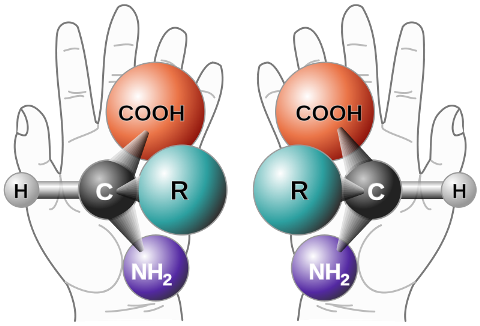 Demonstrating the concept of chirality with two mirror-related chiral amino acid molecules.
Chirality in chemistry refers to the asymmetry, or ‘handedness’, of helical molecular structures. Chiral self-assembled super-structures have interested scientists for many yearsand have a number of potential applications in the development of pharmaceuticals, photodetectors, and biosensors.
Advances have been made in this field by the formation of liquid crystalline phases, of which two cubic phases comprising interpenetrating molecular networks have been documented: a ‘double gyroid’ phase with two networks (Ia3d symmetry) and a ‘triple network’ phase with three networks (Im3m symmetry).
A collaboration of scientists from the UK, Germany and China sought to investigate the chirality of these cubic liquid crystalline phases. The study, published by Angewandte Chemie, demonstrated that chirality was surprisingly observed in structures made by nonchiral compounds.
Compounds possessing a 5,5'-diphenylbithiophene core were studied using the Circular Dichroism (CD) beamline (B23) at Diamond. The Materials and Magnetism beamline (I16) was also used to carry out thin film X-ray diffraction studies and the Small Angle Scattering and Diffraction beamline (I22) was used for diffraction in transmission geometry. Preliminary work conducted by the group using polarising microscopy demonstrated that the Im3m phase was always chiral, whereas the la3d phase was not.
At Diamond, the intense CD signals in the Im3m phase proved the existence of strong chirality, even though they were comprised of nonchiral molecules. Upon melting, the signal was lost as the chiral superstructure broke down. Professor Goran Ungar, the lead scientist of the study, explained that, “repeated cooling into the cubic phase and melting again gave, randomly, right- and left-handed polarisations, showing that the induced chirality was not due to chiral impurities or defects in the substrate, but was triggered by genuinely random spontaneous chiral nucleation.”
The molecules studied were formed of rigid rod-like parts with flexible chains at each end. The molecules stacked and twisted to avoid their chains clashing with adjacent molecules to form right- or left-handed helices. The helices in turn formed infinite 3D interpenetrating networks. The nonchirality of the Ia3d phase was believed to be caused by the opposite chiralities of the two networks, wherein the two networks were twisted in opposite directions. However, the same effect was not observed in the Im3m phase because the triple-network arrangement imparted a residual chirality. 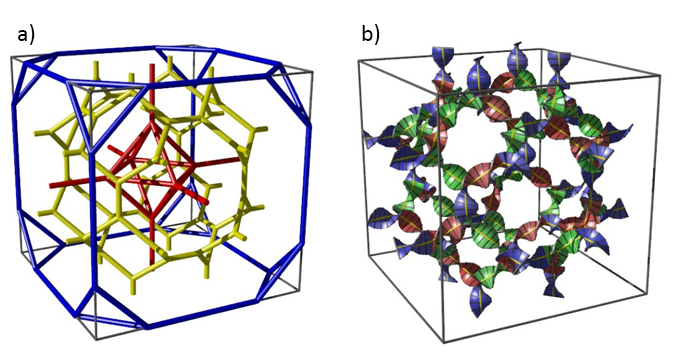 Figure: (a) Unit cell of the Im3m cubic liquid crystalline phase; the three networks are coloured blue, yellow and red.1 (b) The middle network (yellow in (a)) represented as twisted ribbons with the black rods symbolising the rod-like molecules.

Prof Ungar further explained that, “the remarkable feature of the triple network cubic is not only that it creates chirality where there was none in the molecules themselves, but also that a single handed helical twist spreads over the entire liquid crystal material, over centimetres or even larger distances. Such a phenomenon has never been observed before.”
This fascinating discovery at Diamond means that chiral synthesis could be simplified by the addition of a small amount of chiral dopant to direct a nonchiral compound to form chiral structures of the desired (left or right) hand. This could have applications for drug separation and purification, high-end displays and chiral-nonchiral optical switches. Encouraged by the findings at Diamond, the team plan to continue studying chiral induction in 3D-ordered liquid crystals and will examine the liquid phases of the compounds where, surprisingly, strong chirality is sometimes also observed.
To find out more about using the B23 beamline, or to discuss potential applications, please contact Principal Beamline Scientist Dr Giuliano Siligardi: giuliano.siligardi@diamond.ac.uk