Scientists studying protein-protein interactions under high pressure conditions have found marked distinctions in the way that proteins interact with solutions corresponding to the anion present. Understanding the phase behaviour of protein solutions is of fundamental importance in various fields of research, particularly in protein aggregation and phases separation, which form the basic mechanism behind diseases such as sickle cell anaemia, cataracts, Alzheimer’s and diabetes mellitus type II. 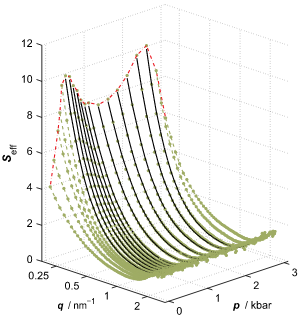 Measured effective structure factor Seff (q) of a 20 wt.% lysozyme solution as a function of pressure at T = 16 °C. Black lines display the refinement of the data using the sticky hard sphere model, the red line shows the scattering intensity at q = 0.2 nm−1

Two recent publications present results from data collected using Small Angle Scattering & Diffraction beamline (I22) at Diamond Light Source aided by Andy Smith and Marc Malfois, alongside data from ESRF beamline ID02. The researchers at Dortmund University, Germany, used small angle X-ray scattering (SAXS) in combination with a liquid-state theoretical approach to determine the effect of altering pressure on the ordering and phase separation of proteins. Following the report of a metastable liquid-liquid phase separation (LLPS)[i] in lysozyme, the group tested the effects of high hydrostatic pressure on the phase behaviour of lysozyme solutions in the LLPS region, characterising the intermolecular protein-protein interactions as a function of pressure and temperature. An effective structure factor was calculated from the SAXS signal measured for concentrated protein solution, from which the intermolecular interaction potential, V(r), could be modelled by a sticky hard sphere potential. A reentrant phase transition, involving transformation from one state to a macroscopically similar one via two or more phase transitions, is found at high pressure for all protein concentrations studied.

Following on from this work, a further study was undertaken using beamlines I22 and ID02 investigating salt anions in solutions of lysozyme. Typically, small, high charge-density ions are considered to be kosmotropes, i.e. ‘structure makers’ that reinforce the H-bond network of water, and conversely, large ions are considered to be chaotropes, i.e. ‘structure breakers’ that exert the opposite effect. Keeping the cation constant (Na+, chosen due to its weak interaction with water), whilst altering the anion (Cl-, SO42-, PO43-), the group collected SAXS data at differing pressure to observe the effect of the anion on the interaction potential.

NaCl can be considered to exhibit the most chaotropic effect on aqueous lysozyme protein and has the least effect on the pressure dependence of interaction potential V(r). The multivalent anions SO42- and PO43- are protein stabilising anions and a clear pressure dependence occurs with increasing concentration. The strong kosmotropic effect, particularly for the phosphate ion, renders the solution structure less like bulk water at high salt concentrations. This demonstrates that the structural properties of the salt solutions are able to influence the spatial organisation and interactions of the protein, specifically under high pressure.

Dr Johannes Möller of the Dortmund group explained how Diamond’s I22 beamline was essential to their studies. “Beamline I22 offers a unique opportunity in that it combines a high intensity SAXS beamline with a highly automated high-pressure set-up, allowing a large number of samples to be monitored under various conditions in a short amount of time.” On the importance of such results he added “our results shed light on the physics that govern the phase behaviour of highly concentrated protein solutions, which can help to optimise processes involving protein purification and storage, or in understanding conditions like sickle-cell anaemia and Alzheimer’s on a molecular level.”

Deducing the intermolecular interaction potential with respect to differing conditions is of practical benefit in many fields of research. The application of pressure can be used to fine-tune the second virial coefficients of protein solutions, which could lead to tuning of nucleation rates to control protein crystallisation and prevent aggregation. This is imperative in studying protein crystallisation and could assist with protein dissolution in drug delivery, and in the long-term storage of concentrated protein systems, as indicated by Dr Möller. In addition to leading to a better understanding of conformational diseases, studies employing small angle X-ray scattering techniques could be applied to examine biological behaviour in extreme environments, such as the high pressures encountered in oceanic floor crusts, which, in turn, enables scientists to investigate stability and resistance of biological matter at a primary level.