Scientists working at Diamond Light Source have revealed new information about 10,000 years old pigments used in Neolithic wall paintings and designs from two sites. The work, which took place on the Multimode InfraRed Imaging And Microspectroscopy (MIRIAM) beamline B22, helped to identify an unexpected component thought to have been included to improve the visual aesthetic of the displays. The research also showed that a naturally occurring pigment was used, providing researchers with insights into the original soil profile of the region prior to massive flooding. 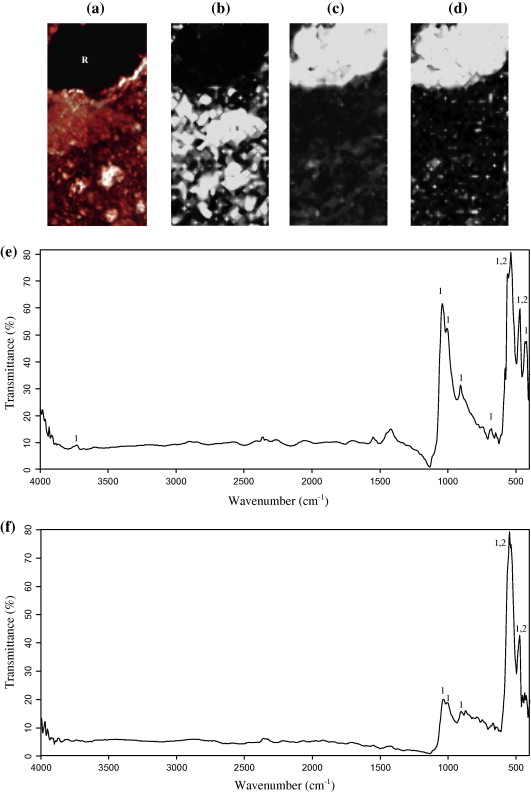 IR Chemimaps showing the distribution of several different minerals across a small area of the red sediment from Sheikh-e Abad (frame width = 0.6 mm). (a) A photomicrograph showing a visible image of the mapped area (‘R’ = an accumulation of dark red sediment), followed by Chemimaps showing the distribution of (b) calcite (CO32− asymmetric stretch at 1412 cm−1), (c) kaolin group clay (Si–O–Si and Si–O–Al stretches at 1046 cm−1 and Al–O–H bend at 998 cm−1) and (d) clay and hematite (Si–O–Al and Si–O bends and Fe–O lattice vibrations at 547 and 477 cm−1). The descriptions in the brackets refer to the peaks that were integrated to produce the Chemimap for each mineral. The IR spectra displayed are from different locations within the accumulation of red sediment, showing (e) an area where the kaolin clay spectrum dominates and (f) the hematite spectrum dominates (1. clay, 2. hematite).
Courtesy Elsevier

Red pigment typically is obtained from naturally occurring minerals, red ochre (dehydrated iron oxide or Fe2O3) and cinnabar (mercury(II) sulphide or HgS). For the researchers, understanding the composition of red pigments used allows them to determine the source of these pigments, how the components were mixed, and how far away from the artefact sites these components are found.

The work involved synchrotron based infrared (IR) microscopy on the MIRIAM beamline B22. Different pigments will produce characteristic absorption bands when exposed to the infrared light, and by observing such infrared fingerprint via a microbeam the researchers can classify the minerals and organic contents distribution at the micron scale within the sample.
The first sample analysed came from a wall painting located in Çatalhöyük, a Neolithic proto-city found in the southern Anatolia region of Turkey. This sample was shown to contain obsidian, a natural volcanic glass with high silica (SiO2) content, which is formed by the rapid cooling and solidification of lava.
The use of obsidian grains in red pigment is very unusual, and had not been observed at the Çatalhöyük site before. Obsidian grains may introduce retroreflective properties (where light is reflected back in the direction of the source, regardless of the angle of incidence) similar to those seen in cat’s eyes or road markings. The researchers believe that as well as adding to the red colour of the paint, the obsidian grains may also have been added to improve the prominence of the colour in the low light conditions at the site.
The second sample, taken from Sheikh-e Abad in northern Iran, was shown to contain a mixture of minerals associated with a type of red clay known as terra rossa. This is one of the most common types of clay found around the earth.
By analysing the distributions of minerals through the sample the researchers were able to show that this was likely to have been used in its natural form, and not mixed with any other materials. This is an exciting finding as terra rossa is not present on the site at the moment due to a massive flood years after the site was abandoned.
Synchrotron light is used in many archaeological research projects; providing a sophisticated complementary investigative tool to the more traditional methodologies established over the centuries. Scientists can make use of the non-destructive techniques to understand, protect and preserve precious ancient artefacts.

To find out more about using the B22 beamline, or to discuss potential applications, please contact Dr Gianfelice Cinque: gianfelice.cinque@diamond.ac.uk