An intelligent weapon to combat tuberculosis

An intelligent weapon to combat tuberculosis

Tuberculosis is a major cause of death worldwide, killing over 1.5 million people each year. Understanding how the bacterium Mycobacterium tuberculosis causes disease in humans and how it survives in the body could provide the key to combating this killer disease. Scientists from the Universities of Oxford and British Columbia have used Diamond to determine the structure of a protein called HsaD, which enables the tuberculosis bacteria to survive in the human body. Knowing the structure of HsaD will help in the design of drugs to combat the disease.

Studying the genetic make-up of Mycobacterium tuberculosis, scientists identified genes that enable intracellular survival in the human macrophage. One of the genes encodes for HsaD, a meta-cleavage product (MCP) hydrolase which acts as a catalyst in the metabolism of cholesterol. The researchers produced HsaD as a recombinant protein and used the Diamond synchrotron to determine the three-dimensional protein structure by X-ray crystallography.

The research showed that HsaD has a similar structure to other known MCP hydrolases, with the notable exception of a larger active site. This is consistent with the role of HsaD in the hydrolysis of relatively bulky cholesterol metabolites.

"Tuberculosis is the leading cause of death from an infectious agent worldwide. It is only by continued collaborative and multidisciplinary research that we can gain a better understanding of this important pathogen, and to develop novel therapies to treat tuberculosis. New therapies are desperately needed, with increased incidence worldwide of multi- and extensively-drug resistant strains of Mycobacterium tuberculosis. "Our research is the first step towards a detailed understanding of how the HsaD enzyme is involved in the pathogenicity and persistence of M. tuberculosis. It is also the first step in the rational drug design process: where we can design potential drugs based on the 3D structure of essential biological molecules. The HsaD enzyme is one of several related enzymes which we are actively investigating as new targets against M. tuberculosis. "This research will give vital information about a novel biochemical pathway in this organism, and also may lead to the development of new therapies which help to control the tuberculosis epidemic."

This research was funded by the Wellcome Trust, the Canadian Institutes for Heath Research and a Canadian National Scholarship. 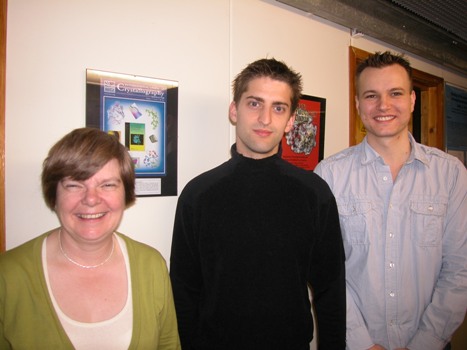 Researchers at the Department of Pharmacology, University of Oxford. From left to right: Edith Sim, Nathan Lack and Isaac Westwood.