M. thermoacetica is a thermophile, a bacterium that likes to grow in high temperature environments. It has the ability to form heat-resistant spores that can resist temperatures as high as 121 oC. RsbS is a component of assemblies of proteins known as ‘stressosomes’ in another bacterium, called Bacillus subtilis. These stressosomes regulate stress resistance by transmitting signals via a protein called RsbT when in a stressful environment.

However, the equivalent structure in M. thermoacetica, which includes RsbS proteins, does not regulate stress resistance. Instead, it regulates the production of a very common signalling molecule called cyclic diguanosine monophosphate. Nonetheless, because the sequences of RsbS proteins in both species of bacterium are similar, the new crystal structure will allow comparisons to be made to investigate how the stressosome binds and releases the signalling protein RsbT. 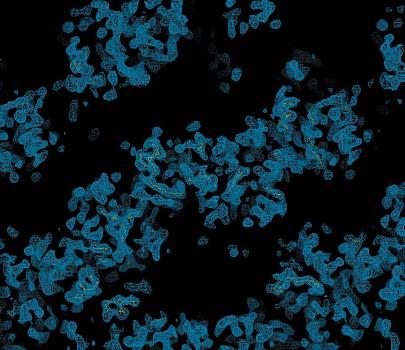 Section of the 3.5 A ° experimentally phased electron-density map produced by the program RESOLVE.

Solution of the crystal structure of RsbS used a technique known as SAD phasing. This is one method of recovering important information lost during the measurement of diffraction data, and can be advantageous when using delicate protein samples as it requires less time in the synchrotron radiation beam. In addition, less beamtime is needed, saving resources. This research therefore shows Diamond has a promising future producing high-quality protein structures on the Macromolecular Crystallography beam-lines.

"To be able to solve an experimentally phased structure at Diamond at such an early stage of the implementation of the MX beamlines shows that it has potential to be a world-leading facility and we were impressed with the facilities and the staff. The results we obtained allowed us to fully interpret an EM envelope of the stressosome and as such were vital to our understanding of its biology."

This research was funded by the BBSRC and Newcastle University.