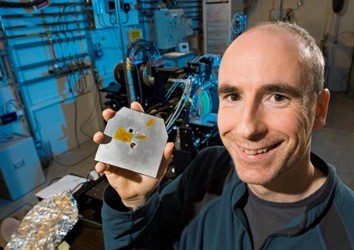 Dr Paul Schofield is a researcher in mineral sciences in the Department of Mineralogy at the Natural History Museum (NHM). Paul used I18 to study a range of earth and life science specimens from the collections at the NHM. The spectroscopic data he obtained should provide an insight into natural processes, environmental systems and Earth and planetary history.

Paul studied samples from Santa Catharina - a meteorite that was discovered in 1875 on the island of Sao Francisco in Brazil. Its composition – high concentrations of nickel and oxygen – has lead scientists to believe that it originated from a large celestial object formed early in the solar system’s existence.

The conditions experienced during a meteorite’s formation determine its properties and cannot be reproduced experimentally on Earth. Examining the composition and structure of the minerals contained in Santa Catharina therefore, will lead to clues regarding the meteorite’s early life and consequently the conditions that shaped the development of the Solar System.