Studying Sodium at Pressures Beyond a Megabar

Studying Sodium at Pressures Beyond a Megabar

The first publication from Diamond Light Source utilised the synchrotron’s high intensity x-rays and a diamond-anvil cell on the Extreme Conditions beamline I15, to study the unique behaviour of sodium at high pressures. This research was carried out by a team from the Centre for Science at Extreme Conditions at the University of Edinburgh, working in collaboration with the I15 beamline team.1

Over the past decade, experimental and computational studies have shown unexpectedly complex structures of sodium and other elements at extreme pressures. However, the physical mechanisms behind the formation of complex phases have not been fully understood. The low x-ray scattering power, combined with the relatively high transition pressures of sodium, mean that it has only recently become possible to investigate its high-pressure behaviour.

At ambient pressure sodium and other alkali metals crystallise into the body-centred-cubic (bcc) structure. As the pressure increases, sodium initially transforms to a face-centred-cubic (fcc) structure, and after further compression undergoes several other transitions, often forming unusually complex structures.

One previous study showed a surprising melting line for sodium at high pressures, rising close to 1000 K at ~30 GPa before falling back to room temperature at 118 GPa, or 1.18 megabar (~1.18 million atmospheres). X-ray diffraction studies at room temperature have demonstrated that the transformation from the bcc structure to the fcc structure occurs at 65 GPa, and then there is another transformation to a more complex body-centred cubic structure with 16 atoms in the unit cell at 103 GPa. It is the details of this more complex structure, cI16, that were determined at Diamond using single-crystal diffraction techniques at 108 GPa. 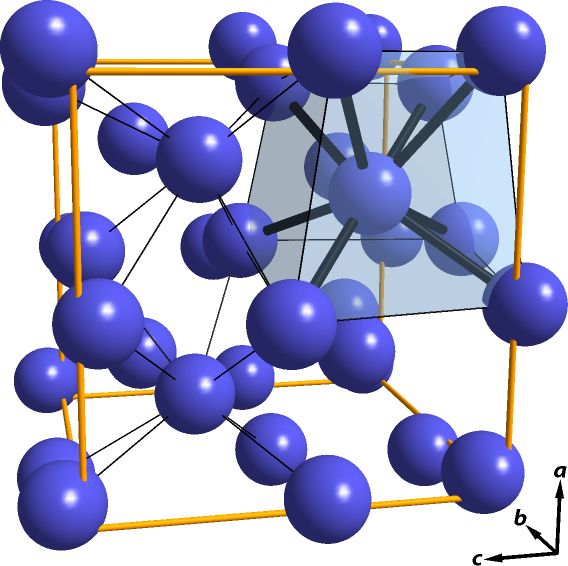 The cI16 crystal structure (from Ref. 1). It can be regarded as a distorted 2 × 2 × 2 superstructure of the bcc structure, in which the atoms are displaced about 0.4 Ǻ (0.04 nm) from their bcc positions in a unit cell 5.46 Ǻ across. The density is nearly four times greater than in the bcc structure at ambient pressure. One of the eight distorted-bcc subunits is highlighted, and the local coordination is indicated for two further subunits.