The machine is an assembly of components used to produce, confine and maintain a high energy electron beam in a closed orbit for periods of several hours while the electrons produce synchrotron light for a wide variety of experiments. 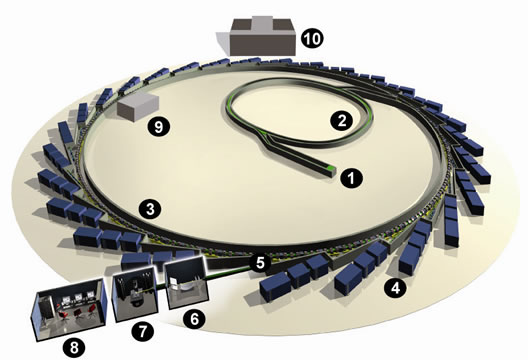 Each of the fifty bending magnets at Diamond curve the electrons through an arc of seven and a half degrees with a radius of curvature of just over seven metres. The sum of all the deflections totals 360 degrees, producing a closed orbit around the storage ring of over 560 metres. The entire storage ring is maintained under vacuum conditions to minimise electrons scattering off air molecules. Electrons with an energy of 3 GeV complete the circuit in approximately two millionths of a second. That’s nearly seven and a half times around the Earth’s equator in a single second!