The UK’s national synchrotron facility, Diamond Light Source, was used by a large, international collaboration to study grains collected from a near-Earth asteroid to further our understanding of the evolution of our solar system.

Researchers from the University of Leicester brought a fragment of the Ryugu asteroid to Diamond’s Nanoprobe beamline I14 where a special technique called X-ray Absorption Near Edge Spectroscopy (XANES) was used to map out the chemical states of the elements within the asteroid material, to examine its composition in fine detail. The team also studied the asteroid grains using an electron microscope at Diamond’s electron Physical Science Imaging Centre (ePSIC).

Julia Parker is the Principal Beamline Scientist for I14 at Diamond. She said:

The X-ray Nanoprobe allows scientists to examine the chemical structure of their samples at micron to nano lengthscales, which is complemented by the nano to atomic resolution of the imaging at ePSIC. It’s very exciting to be able to contribute to the understanding of these unique samples, and to work with the team at Leicester to demonstrate how the techniques at the beamline, and correlatively at ePSIC, can benefit future sample return missions. 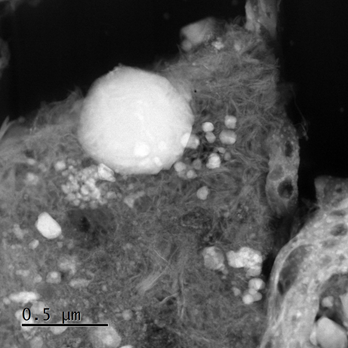 The data collected at Diamond contributed to a wider study of the space weathering signatures on the asteroid. The pristine asteroid samples enabled the collaborators to explore how space weathering can alter the physical and chemical composition of the surface of carbonaceous asteroids like Ryugu.

The researchers discovered that the surface of Ryugu is dehydrated and that it is likely that space weathering is responsible. The findings of the study, published today in Nature Astronomy, have led the authors to conclude that asteroids that appear dry on the surface may be water-rich, potentially requiring revision of our understanding of the abundances of asteroid types and the formation history of the asteroid belt.

Ryugu is a near-Earth asteroid, around 900 metres in diameter, first discovered in 1999 within the asteroid belt between Mars and Jupiter. It is named after the undersea palace of the Dragon God in Japanese mythology. In 2014, the Japanese state space agency JAXA launched Hayabusa2, an asteroid sample-return mission, to rendezvous with the Ryugu asteroid and collect material samples from its surface and sub-surface. The spacecraft returned to Earth in 2020, releasing a capsule containing precious fragments of the asteroid. These small samples were distributed to labs around the world for scientific study, including the University of Leicester’s School of Physics & Astronomy and Space Park where John Bridges, one of the authors on the paper, is a Professor of Planetary Science.

This unique mission to gather samples from the most primitive, carbonaceous, building blocks of the Solar System needs the world’s most detailed microscopy, and thats why JAXA and the Fine Grained Mineralogy team wanted us to analyse samples at Diamond’s X-ray nanoprobe beamline. We helped reveal the nature of space weathering on this asteroid with micrometeorite impacts and the solar wind creating dehydrated serpentine minerals, and an associated reduction from oxidised Fe3+ to more reduced Fe2+.

It’s important to build up experience in studying samples returned from asteroids, as in the Hayabusa2 mission, because soon there will be new samples from other asteroid types, the Moon and within the next 10 years Mars, returned to Earth. The UK community will be able to perform some of the critical analyses due to our facilities at Diamond and the electron microscopes at ePSIC. 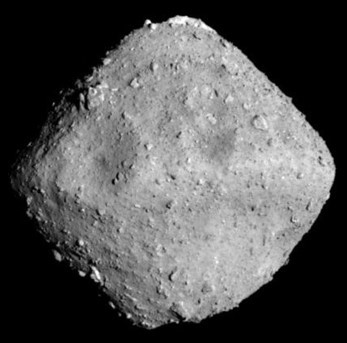 The building blocks of Ryugu are remnants of interactions between water, minerals and organics in the early Solar System prior to the formation of Earth. Understanding the composition of asteroids can help explain how the early solar system developed, and subsequently how the Earth formed. They may even help explain how life on Earth came about, with asteroids believed to have delivered much of the planet's water as well as organic compounds such as amino acids, which provide the fundamental building blocks from which all human life is constructed. The information that is being gleaned from these tiny asteroid samples will help us to better understand the origin not only of the planets and stars but also of life itself. Whether it’s fragments of asteroids, ancient paintings or unknown virus structures, at the synchrotron, scientists can study their samples using a machine that is 10,000 times more powerful than a traditional microscope.