12,000th paper from the UK’s synchrotron pushes the boundaries of studying proteins in motion

Researchers from Imperial College London have recently published their findings from data collected at Diamond’s I24 beamline in The Journal Of Physical Chemistry B, making it the 12,000th peer-reviewed publication from the UK’s national synchrotron, Diamond Light Source. Their study of conformational changes in a fluorescent protein, originally from stony coral, highlights the powerful contribution of the recently developed approach of serial crystallography on a world-class microfocus structural biology beamline.

Freeze-frame view of proteins in motion 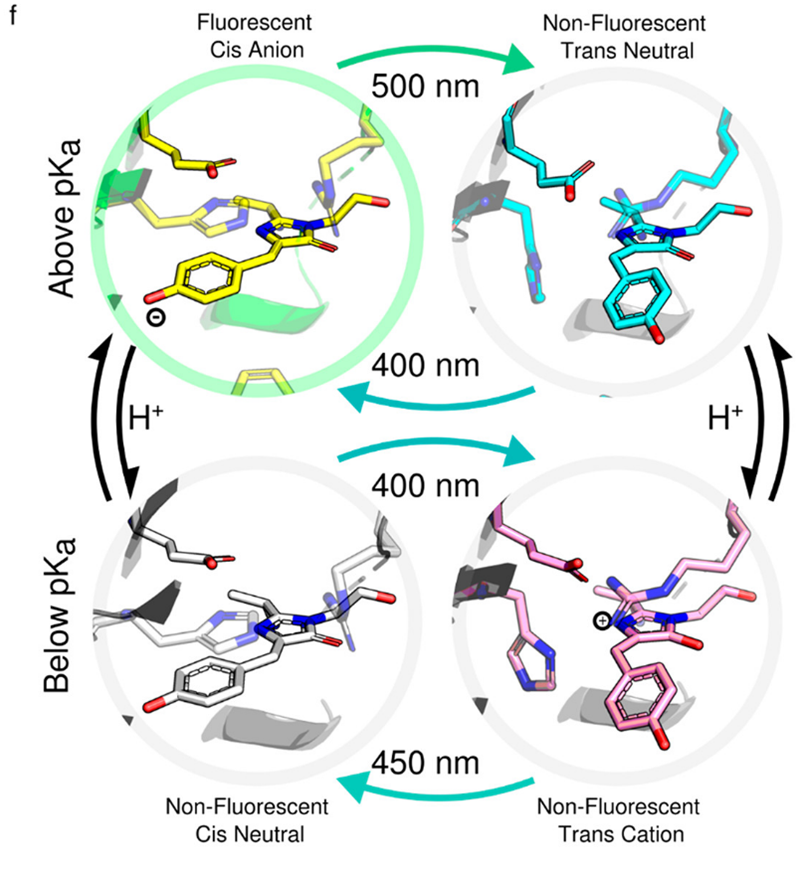 Proteins are the building blocks of life – our entire body is made from them, including structural proteins, enzymes, hormones and antibodies. X-ray crystallography is a well-established technique for determining the 3D structure of a protein crystal, which helps us to understand how proteins function. Serial Synchrotron Crystallography (SSX) is an emerging method that can capture a series of snapshots of proteins during motion and piece them together, like a stop-motion movie, to understand the critical steps and components in the protein’s activity. This allows movies of protein motion to be captured on time scales spanning femtoseconds to seconds with resolution high-enough to observe the movements of single atoms in the protein structure.

Diamond’s I24 Microfocus Macromolecular Crystallography (MX) beamline is a world leader in SSX and the team there are developing several serial data collection approaches. I24 provided a bespoke set-up for the team from Imperial College London, who were interested in the reactions of a fluorescent protein, known as rsEopa. Their study helps improve our understanding of protein interactions with light which has impacts for scientists studying photosynthesis, vision and even bioelectronics. To make their measurements the team used a two-laser excitation scheme. They first used a flash of green light to switch the protein into a desired state followed by a flash of blue light which initiated another reaction. Using the X-rays produced by the Diamond synchrotron, they could extract the protein structure by measuring and combining the diffraction pattern from 100,000s of tiny micron-sized crystals.

The team were able to combine their synchrotron diffraction data with complementary spectroscopic data from their home laboratory to confirm the shift between the protein’s different states. They discovered that at acidic pH, the photo-switching behaviour of their protein followed a different cycle to that at an alkaline pH. In particular, they made the first observation switching of to a new chromophore charge state. Their findings demonstrate this new reaction-class in fluorescent proteins, which the authors say will be exciting to explore using state-of-art ultrafast spectroscopies.

It is really exciting to have the flexibility at a beamline such as I24 to reconfigure the set-up to do these types of laser excited room-temperature time-resolved crystallography experiments! Combining this with our home lab experiments has really allowed us to dig into what was happening in this protein in a way that wouldn't be possible using traditional crystallography techniques at cryogenic temperatures.

The future of kinetic protein studies

The UK has a rapidly growing community of structural biologists wishing to access dynamic structural information to help explain the mechanisms, binding modes, drugability, and other features of important biological molecules and complexes. A flagship upgrade has been approved for beamline I24 as part of Diamond-II, a co-ordinated programme of development that combines a new machine and new beamlines with a comprehensive series of upgrades to optics, detectors, sample environments, sample delivery capabilities and computing. I24 KMX (Kinetic Macromolecular Crystallography) will significantly enhance the capability of I24 in the measurement of high quality, low-dose, microsecond time-resolved MX data from room temperature crystals as well as improving well-established microfocus cryo-crystallography

Experiments like the one with Imperial College London demonstrate that the combination of synchrotron microfocus beams and serial crystallography is a powerful one. Working together with Imperial we were able to develop existing techniques into a new set of tools to answer a particular biological problem. The I24 KMX upgrade will seek to build on this blurring of the boundary between ‘traditional’ multi-crystal microfocus MX and serial approaches by allowing much of the same infrastructure to be exploited for each. Diamond-II and I24 KMX offer the opportunity to deliver routine, high quality microsecond structural dynamics for the UK, opening this technique up to a broad cross-section of users and adding an extra dimension to the study of biological structure and function.