A team of scientists at University of Oxford have worked with multiple techniques at Diamond Light Source, to solve the structure of the influenza replication machinery and to determine how it interacts with cellular proteins. This research furthers our understanding of influenza replication and how the virus adapts to different hosts.

Beyond causing seasonal flu, influenza can become pandemic when it jumps from animals to humans. By taking a closer look at the replication cycle of the virus, researchers are piecing together how influenza hijacks human and animal cells for its replication.

This animation explores how the flu virus interacts with our bodies, focusing on a protein (ANP32A) that aids replication of the virus. Knowing the structure and function of this stabilising protein will enable scientists to work on new treatments to fight the disease.

The influenza virus stores its genes in RNA and the virus synthesises its own RNA polymerase to replicate its genome. This viral polymerase has multiple functions in addition to replication, which collaborative research across Diamond has helped to elucidate. These studies show that the polymerase regulates the timing of transcription — the first step in protein synthesis — and replication, which can only begin once viral proteins have been produced. The findings reveal how the polymerase interacts with a cellular protein, ANP32A, and appropriates it to shelter viral RNA from detection by the immune system.

The currently circulating influenza A viruses are thought to be the evolutionary progeny of the virus that caused the 1918–1919 global pandemic, which was responsible for between 50 and 100 million deaths worldwide. Influenza viruses are normally restricted to infecting one type of animal host, such as birds, and require specific adaptations to jump to a different animal, like humans. The 1918 influenza virus is thought to have jumped from waterfowl into humans and is considered the ‘founder virus’ that has contributed viral genome segments for all subsequent epidemic and pandemic strains. In a study published earlier this year, the group determined structures of the polymerase from the 1918 pandemic influenza virus and identified sites on the surface of the polymerase that are sensitive to inhibition1.  This in turn can help identify and validate targets for drug discovery. 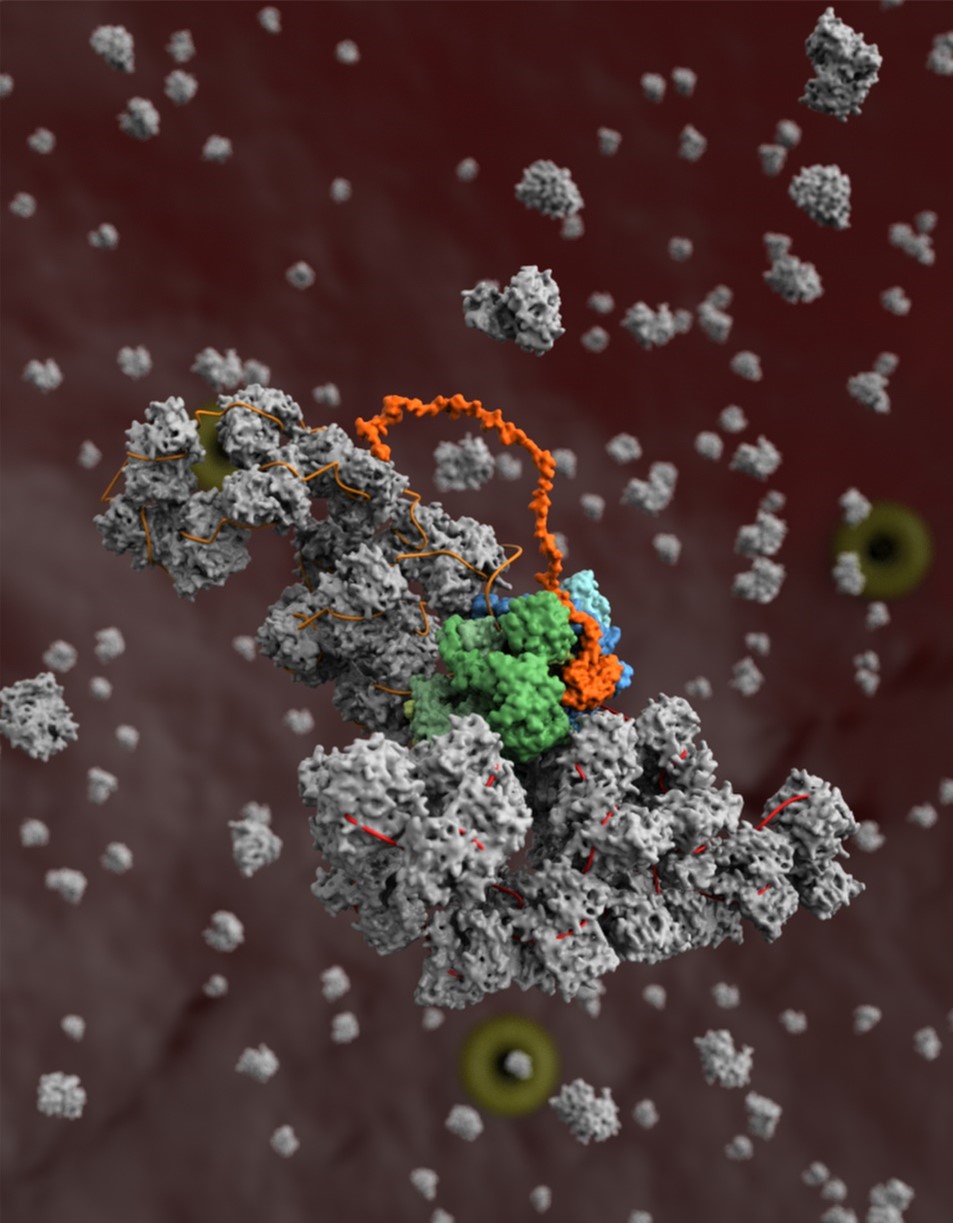 A model of the influenza virus replication machinery in the process of the viral RNA polymerase (blue) copying a viral RNA genome segment (red) in complex with a second copy of the polymerase (green) and host protein ANP32A (orange), and the assembly of the newly synthesised RNA segment (orange) into a ribonucleoprotein complex (grey).

This research is crucial to understanding how ANP32A partly accounts for the host-jumping barrier. ANP32A differs greatly between humans and birds, forcing animal and avian influenza viruses to evolve to become less alike. Structural biology research at Diamond provides insights into the pandemic potential of different strains of flu. By studying which regions of the viral polymerase interact with ANP32A, the researchers determined that a mutation in avian influenza’s polymerase may allow it to interact with human ANP32A, permitting that strain of bird flu to jump into human hosts2.

Structural characterisation of large protein complexes is a challenge, and the influenza replication complex was no exception. X-ray crystallography at beamlines I03 and I24 was used to determine the structure of the viral polymerase in near-atomic detail, revealing that the single polymerases pair together to form dimers. To complement the crystal structure of the dimers, a structural technique known as SAXS was performed in solution at beamline B21 to demonstrate the importance of dimer formation to the function of the polymerases.

The researchers proposed that single RNA polymerases carry out transcription early in infection and switch to replication later only when they couple together as dimers, following the production of additional copies of the polymerase3.

To expand on this structural work further, the research team performed cryo-EM at eBIC. Professor Jonathan Grimes at University of Oxford explains:

Cryo-EM has allowed us to begin to look at very interesting protein complexes that we would find impossible to grow crystals of in the lab.

Interactions between RNA and the viral polymerase were determined using cryo-EM, revealing that one polymerase in the dimer replicates the viral genome while the other coats the newly formed RNA in viral proteins that shelter it from immune sensors. Intriguingly, influenza hijacks the cellular protein ANP32A to stabilise the dimers and to assist with coating and hiding viral RNA from immune detection.

Diamond democratises science. The fact that all of these techniques exist in one place and are available to the scientific community is a hugely valuable resource. These world class cutting-edge facilities are freely available to scientists from universities and institutes across the UK and EU with interesting and important biological questions.

These studies help us to identify and validate targets for drug discovery. We are hoping that the new insights generated into workings of the influenza virus transcription machinery using the technologies at Diamond will eventually lead to novel antivirals targeting the influenza polymerase.