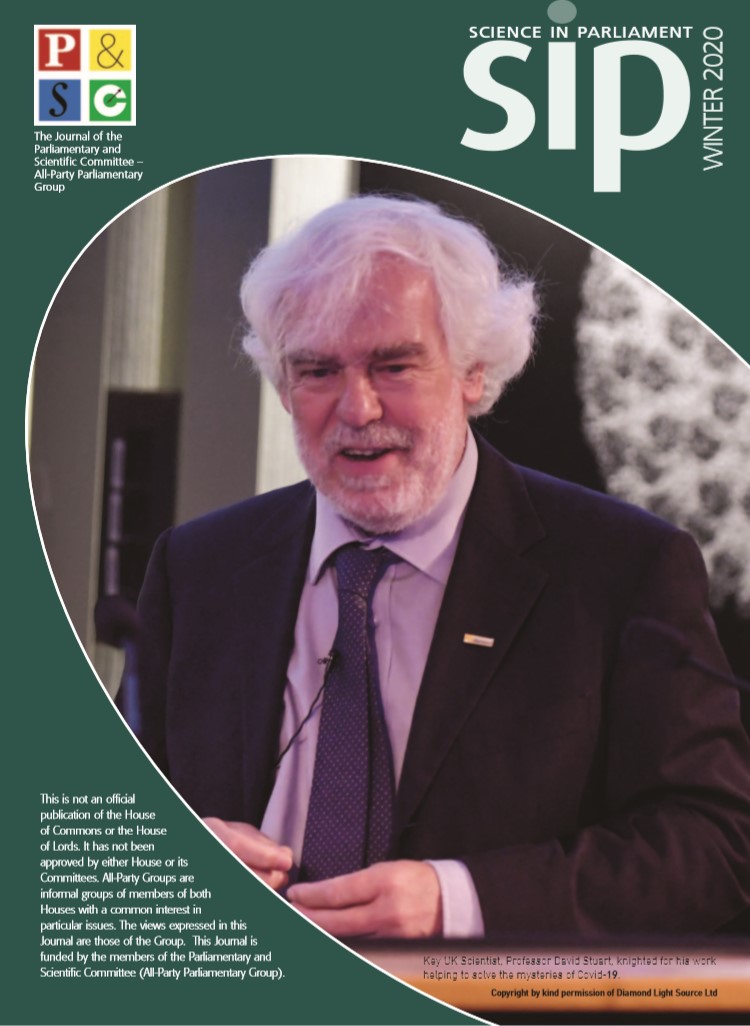 The Winter 2020 edition of Science in Parliament, the official journal of the Parliamentary & Scientific Committee, leads with an article congratulating Diamond's Life Sciences' Director, Professor Dave Stuart, on receiving a Knighthood.

Prof Sir Dave Stuart has dedicated his career to the understanding of viruses affecting both human and animal health, and was a awarded a Knighthood for his contribution to structural biology and his work on the COVID-19 pandemic.

He has determined a significant number of virus structures, with targets ranging from picornaviruses, which include a number of important animal and human pathogens (foot-and-mouth-disease virus, hand-foot-and-mouth disease viruses and hepatitis A virus) to the larger dsRNA viruses (Bluetongue virus). He pushed methods to enable complex structures to be seen in atomic detail including the first high resolution structure of a larger virus (Bluetongue virus) and the first high resolution structure of a membrane containing virus (PRD1). Although many of the viruses he has worked on do not infect humans, these results have generated technological and mechanistic insights directly transferable to human viruses.

He has also worked on a number of drug discovery projects, including HIV-1 reverse transcriptase, where the work laid foundations for some of the current non-nucleoside reverse transcriptase inhibitors, and Ebola virus glycoprotein, establishing a novel mechanism of inhibition and validating a drug target now taken up by others. He has developed structural vaccinology, collaborating with other groups in the UK and beyond, supported by Wellcome, Gates and WHO. MSD Animal Health have licensed patents including his structure-based ideas, with the expectation of moving to production of recombinant FMDV vaccines, collaborating with The Pirbright Institute and Reading University. Based on his work on poliovirus, WHO recently made a call for expressions of interest to investigate scale-up towards commercialisation.

Currently, Dave is leading the scientific efforts and collaborative relationship between Diamond Light Source and the University of Oxford to develop methods for the production of viral proteins for drug screening and structural analysis, which can provide an atomic level of detail in understanding how anti-viral drugs can work against SARSCoV-2 (the virus responsible for COVID-19).  This research helps to realise the potential to identify existing drugs that could be repurposed in the fight against COVID-19. Through Prof. Stuart’s leadership, Diamond has fostered a joint initiative with Exscientia, a leading AI driven drug discovery company, to accelerate the search for drugs to treat COVID-19.

He has also been involved in establishing infrastructure for the benefit and advancement of life sciences. He jointly set up the Structural Biology Division in the department of Clinical Medicine at Oxford, and then established an Oxford centre for EM imaging of infectious particles (OPIC), one of the few facilities globally where pathogens can be studied in detail, a key capability for the UK. He was an early user of synchrotron radiation and led the establishment of the UK MAD beam line at the European Synchrotron Radiation Facility (ESRF). He also established and led the UK activity in Structural proteomics (the OPPF) and has been committed to European activity that resulted in a pan European Infrastructure for Integrated Structural Biology (now Instruct-ERIC of which he is the founding Director). He has been life science director at Diamond Light Source, since 2008 and played a leading role in establishing the National Centre for electron bio imaging (eBIC) at Diamond.

Printed/or reproduced by permission of the Parliamentary and Scientific Committee, publishers of Science in Parliament.