New Data sheds light on genesis of our body’s powerhouses

The mitochondria and its protein making “plants” - mitoribosomes 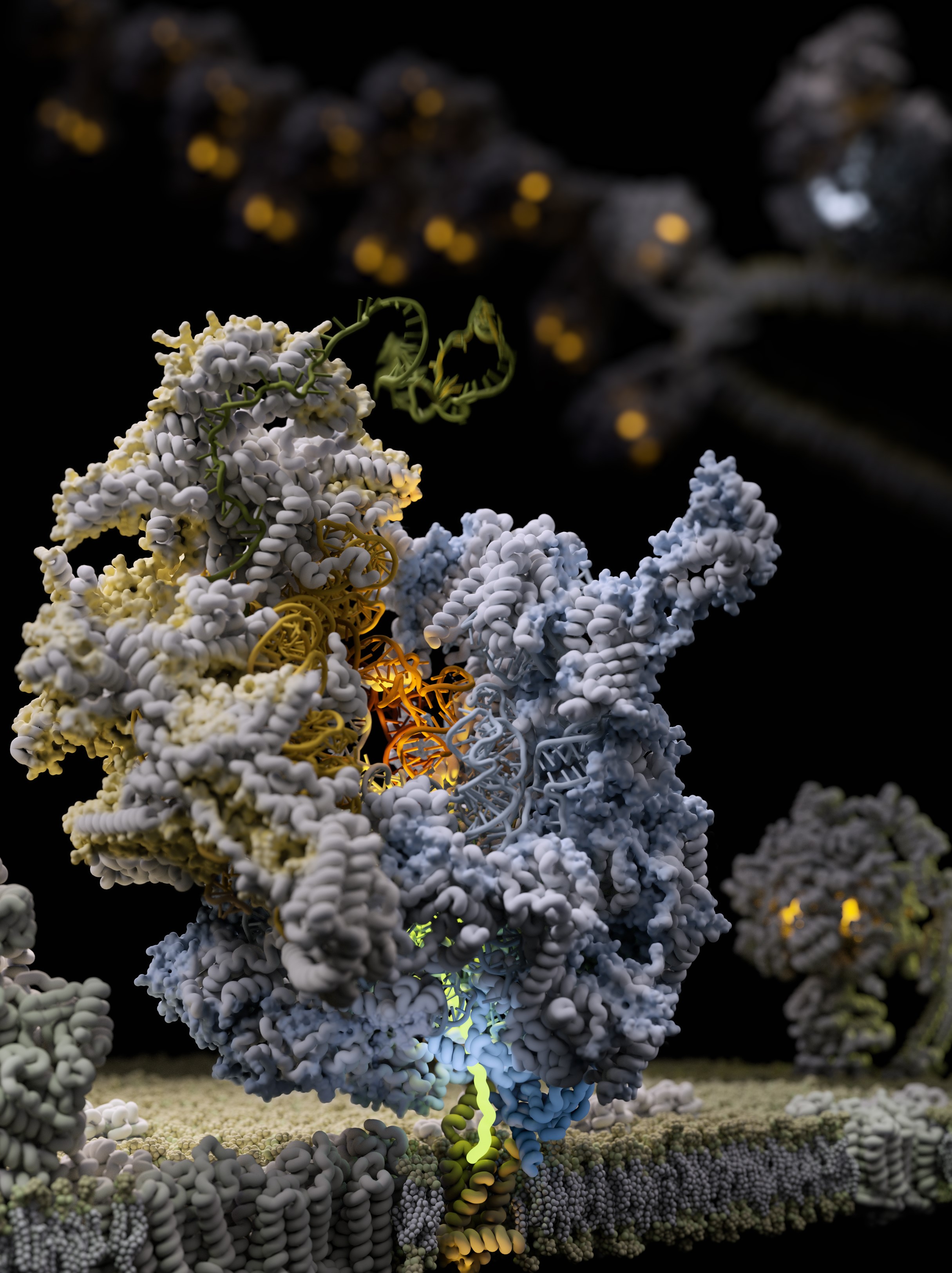 The mitoribosome is attached to its membrane adaptor as it synthesises a bioenergetic protein (glow yellow). Image: Dan W. Nowakowski and Alexey Amunts

Scientists uncover for the first time how the body’s energy makers are made using Cryo-Electron Microscopy (cryo-EM) at eBIC within Diamond.

A new paper, published in Science yesterday, by an international team of researchers reports an insight into 'the molecular mechanism of membrane-tethered protein synthesis in mitochondria'. This is a fundamental understanding of how the human mitoribosome functions and could explain how it is affected by mutations and deregulation that lead to disorders such as deafness and diseases including cancer development.

Mitochondria are intracellular organelles which serve as tiny but potent powerhouses in our body. They use oxygen which we inhale and derivatives from food we eat to produce more than 90% of our energy, and therefore effectively support our life. Mitochondria are particularly important in high-energy demanding organs such as heart, liver, muscles and brain. For example, almost 40% of each heart muscle cell is made up of mitochondria.

The bulk of energy production in mitochondria takes place in naturally evolved “nano-factories” incorporated in specialised membranes. These “nano-factories” consist of proteins cooperatively transporting ions and electrons to generate the chemical energy currency of our bodies. They have to be constantly maintained, replaced and duplicated during cell division. To address this, mitochondria have their own protein making machine called the mitoribosome. The first fundamental understanding of how the mitoribosome looks was achieved in 2014.

Lead author, Alexey Amunts, Head of the program for Biology of Molecular Interactions, at SciLifeLab in Sweden, said:

Seven years ago, our work on the mitoribosome from yeast was termed the Resolution Revolution. The current study represents an additional advance on the original breakthrough. Not only does it reveal how the human mitoribosome is designed at an unprecedented level of detail, but it also explains the molecular mechanism that drives the process of bioenergetics to fuel life.

The term Resolution Revolution was coined at Science magazine in relation to the first successful structure determination of the mitoribosome. This represented a methodological innovation in applying cryo-EM to understand molecular structures. However, this first glimpse into the architecture revealed only a partial picture of a static model. Yet the mitoribosome is a flexible molecular machine that requires the motion of its parts relative to each other in order to work. Therefore, in the current study, the team used the high throughput cryo-EM data acquisition at the electron Bio-Imaging Centre (eBIC) at Diamond to obtain 30 times more data allowing the team  to describe conformational changes during the process of protein synthesis and association with the membrane adaptor. eBIC has been a strategic investment from the Wellcome Trust, UKRI's BBSRC and MRC. Being embedded at Diamond, eBIC benefits from amongst other things the well-established user support in place.

Our study exposed the dynamic molecular mechanism that explains how the mitoribosome actually works to form the cellular powerhouse and reveals that the mitoribosome is much more flexible and active than previously thought. The discovery of intrinsic conformational changes represents a gating mechanism of the mitoribosome without similarity in bacterial and cytosolic systems. Together, the data offer a molecular insight into how proteins are synthesized in human mitochondria.

At Diamond, we are pushing the boundaries of what can be measured in the physical and  life sciences and this latest development is tribute to the team involved in what can now be routinely achieved.

The most important aspect of Alexey's work is the interaction between mitoribosome and OXA1L and the associated flexibility. The fact that mitoribosome is flexible as such is not novel, but the particular flexibility associated with OXA1L interaction is.  This is important for synthesis of membrane proteins, including respiratory chain proteins.  Overall, this work significantly widens our understanding how mitoribosome functions. The work by Alexey Amunts lab resolves another mystery about basic biological processes necessary for creating life as we know it.