Something old, something new: Diamond’s light illuminates our Anglo-Saxon heritage 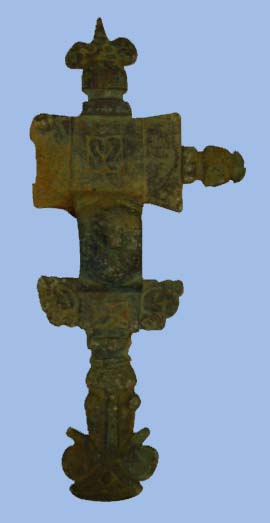 Oakington is a small, village seven miles north-west of Cambridge. Archaeological finds in the area suggest that there may have been a settlement here in the Stone Age. In 1926, horticulturalist Alan Bloom was digging at his new nursery in Oakington when he uncovered three early Anglo-Saxon burials. In the 1990s, Cambridge County Council's Archaeological Field Unit uncovered 24 more burials, which had been discovered during the construction of a children’s playground.
Wondering what else was hidden under the Fens, archaeologists from Oxford Archaeology East (then known as CAMARC) found 17 more burials in 2006/7. And in 2010/11, a further 27 burials were found in new trenches around the playground, including the remains of children, which are rare finds from this period. The most recent excavations were part of the ‘Bones without Barriers’ project, which encourages community communication and participation.

With over a hundred graves, the Oakington site is as a substantial 6th-century Anglo-Saxon cemetery. The Anglo-Saxons lived in Great Britain from the 5th century. Originally thought of as Germanic tribes who migrated here from continental Europe, these people amalgamated with Romano-British groups who adopted some aspects of Anglo-Saxon culture and language.

18 female graves contained brooches, and one in particular stood out. A pregnant woman buried at the edge of the site, apart from other graves, had been buried with lavish grave goods, including three brooches – two small, long brooches and one large, gilt cruciform brooch.
The large brooch is a complex object, made from copper alloy with gilt and enamel decoration. Initial investigations suggested that some of the materials used may have been recycled. In order to study the composition of the brooch in detail, and compare it with others found at the site, Dr Duncan Sayer and colleagues from the University of Central Lancashire brought them to Diamond. Using microfocus X-ray fluorescence (µXRF) on the I18 beamline, they were able to study the slight variations in the chemical composition of the brooch components, to investigate what elements the brooch included, with a particular focus on the copper-alloy and enamelled areas, because enamel is not usually associated with Anglo-Saxon objects of this date.
The enamel on the large brooch is predominantly brown, with specks of red material and a darker, almost black material. Comparing the µXRF results with optical images shows that the brown and red materials are lead, whilst the black specks are iron. The most likely explanation is that the lead is lead oxide, perhaps from Roman glass. It is also probable that the iron oxide is magnetite or hematite. Hematite is the main iron ore, and is found across Britain and mainland Europe; magnetite is rarer – there are known deposits in Germany and Italy.

The brooch was probably manufactured from recycled materials. The flecks of different material within the enamel are similar to a Roman enamelling method which used the scrapings from inside metal-working crucibles as a reagent. These results suggest that previously-used glasses and materials were ground together to form a new enamel mixture for this brooch, using a method which is not known amongst the continental Angles or Saxon.

Nonetheless, the style of brooch is undeniable an Anglo-Saxon design. A survey of other Anglo-Saxon brooches that have been unearthed at the Cambridge/Suffolk fen edge also found traces of enamelling, suggesting that this was a much more significant and localised phenomenon than once thought.

What we’re seeing here is a very exciting fusion of Anglo-Saxon art and Roman-British technology. One of the things we didn’t find on our first trip to Diamond was any trace of mercury on the gilded brooch we studied. This was intriguing, because the main theory for how gold was applied to jewellery in Anglo-Saxon Britain is that it involves the use of mercury to make an amalgam. We were lucky enough to be able to come back to I18 to investigate the gilt on three Oakington brooches from different periods in history.”

The results of these later experiments are still being analysed, but they do seem to suggest that mercury was involved in the gilding process in the Anglo-Saxon period.

Analysis of the grave goods is only one aspect of the ongoing investigations into the Oakington site. Dietary isotopes examined by the University of Reading showed that the community (thought to be made up of around 125 people, including 80 adults) all ate the same things. Unfortunately, an examination of their teeth also indicates that they suffered from severe food shortages and infectious diseases during childhood, chronic food shortages being a more likely explanation for their ill health than one single famine.
An international collaboration has also looked at the DNA of the Oakington skeletons as part of a wider study. By comparing them with modern DNA, they showed that Anglo-Saxons made up around 38% of English ancestors. (The figure is 30% for Scotland and Wales, consistent with the fact that Anglo-Saxons first settled in south-east England.)[1] Of the four Oakington skeletons tested, one was shown to be a British native, two were migrant Anglo-Saxons, and one was a mixture of both. Despite the differences in their origins, all of the individuals were treated the same way after death, showing that they were all fully integrated into one community.
[1] http://www.dailymail.co.uk/sciencetech/article-3407267/The-English-one-Anglo-Saxon-Study-reveals-time-immigrants-mixed-British-population.html