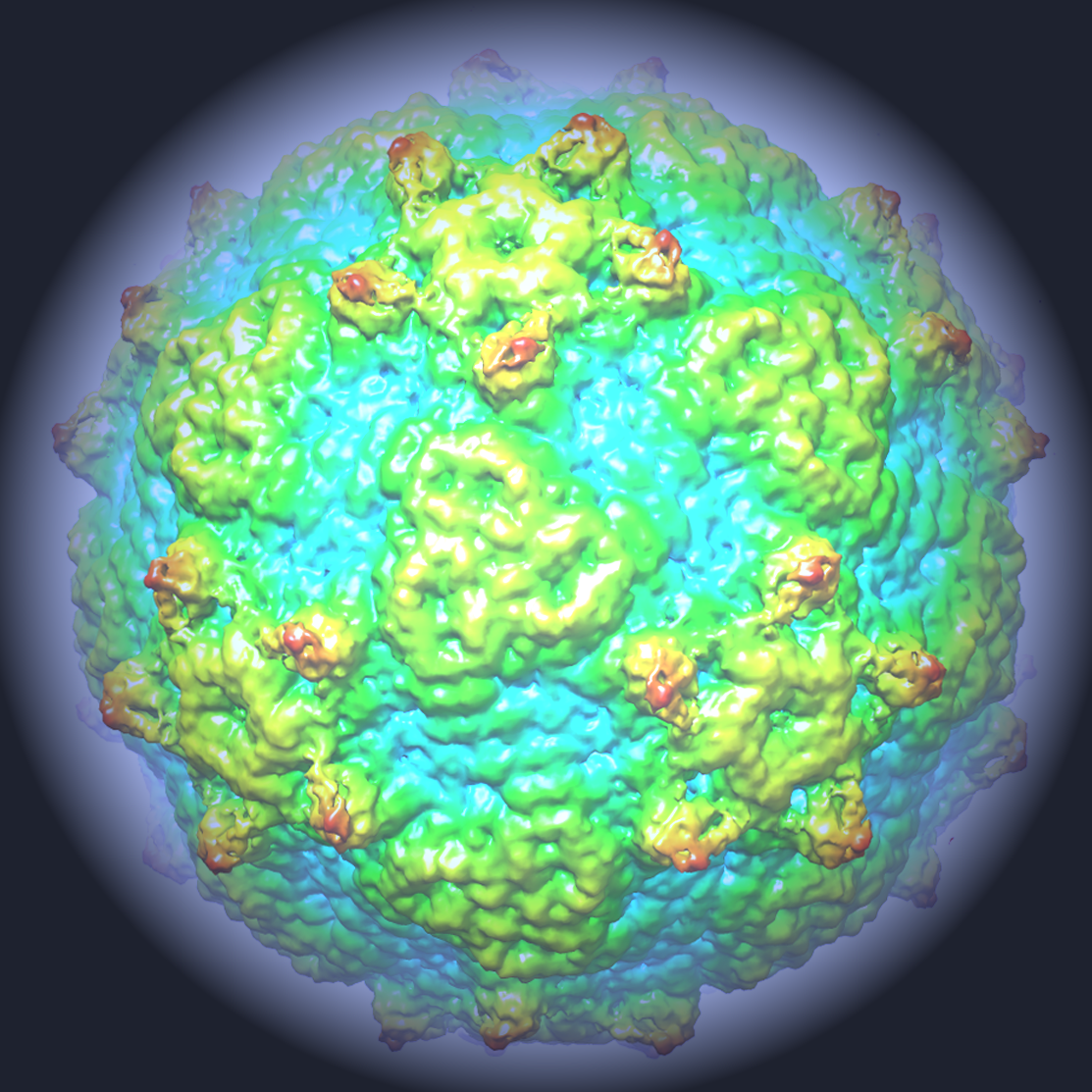 An international group of scientists have solved the atomic structure of the Ljungan virus, an infection of rodents that is also associated with a variety of dangerous diseases in humans, including diabetes, neurological disease, and sudden infant death. The identification of the structure could be an important step towards better understanding and treating the virus and augmenting our understanding of virus evolution as a whole.
Professor Dave Stuart was lead author on the paper, which was published in Nature Communications; he observes the importance of having a wider understanding of virus evolution: “This work adds to the growing body of research on Ljungan virus – a deeply intriguing pathogen, but the work also has a wider impact.”
“Knowing the structure of viruses and viral elements is pivotal to combatting particular infections, but that knowledge can also help us to predict the structure and treatment options for other diseases. We can study how the structure changes between different viruses and virus families, and as we build up that wider understanding, we become better equipped to anticipate what to expect, so that when we come to look at tackling another virus, be it an existing pathogen or something entirely new, we already have a base level of understanding which we can build on.”
First discovered in the 1990’s, Ljungan virus – also known as Parechovirus B – is extremely widespread and studies suggest that it is endemic in rodent populations in the UK. There is also emerging evidence to suggest that there are links between exposure to Ljungan virus and a variety of diseases in humans. But despite being widespread, little is known about the virus. Thus the discovery of Ljungan’s atomic structure marks a major step forward in understanding the disease, and the in-depth picture of the virus’s framework could eventually lead to new treatments being developed.
The group made up of scientists from Diamond, the University of Oxford, The Pirbright Institute, The Institute of Biophysics of the Chinese Academy of Sciences and Linnaeus University in Sweden found that the structure of Ljungan looked different from other viruses in the same family. It had characteristics of more ancient viruses, like those that infect insects. As such, the research also sheds light on the wider mystery of virus evolution, providing a link between primitive viruses and more recent evolutions.
Viruses house their genetic code – which contains instructions for replication – inside a shell called a capsid. In some, the capsid forms around the code, and in others the code is inserted into the pre-formed capsid. Ljungan virus is a member of the picornavirus family, and one of the problems of this family is that we don’t know how the process behind packaging the infectious RNA genome works.
This new research provides novel insights into this process, showing that Ljungan virus uses a different mechanism to encapsidate its genetic code than other viruses: an important finding for establishing how viruses have evolved to use different approaches to replicate and spread.
Dr Toby Tuthill, who leads the Picornavirus Molecular Biology Group at The Pirbright Institute commented, “RNA packaging has been a long standing puzzle for this family of viruses, which includes better known viruses such as poliovirus and foot-and-mouth disease virus. This new structure of Ljungan virus is incredibly interesting as it suggests a possible mechanism for this process”.
The team used advanced cryo-electron microscopy (cryo-EM) facilities at Oxford to identify the Ljungan virus structure. These facilities are part of the new national electron microscopy centre based at Diamond. Cryo-EM allows users to investigate the structure of individual cells and to visualise single bio-molecules; the technique is becoming increasingly important as the resolution of data improves, and cryo-EM is likely to be vital to future pathogen research in the coming years.
Since the Ljungan research began, a brand new cryo-electron microscope has now become available at Diamond, opening up the field of cryo-EM for visitors to the UK synchrotron and allowing users to do more than ever before. The equipment to support cryo-EM is often prohibitively expensive for individual organisations, so centralising equipment at facilities like Diamond is an excellent way of improving access for the research community. With this cutting-edge equipment on site, Diamond is becoming the facility of choice for scientists looking to do viral pathogen work.
The research into the Ljungan virus will now continue at Diamond and Oxford as the team looks to uncover more information about this mysterious pathogen. Their findings will inform the emerging body of research linking the virus to serious diseases in humans and point the way to future treatment options. What’s more, the work will continue to add to our wider understanding of virus families and how different characteristics have emerged over time, knowledge that could prove vital in predicting how viruses might evolve in the future.