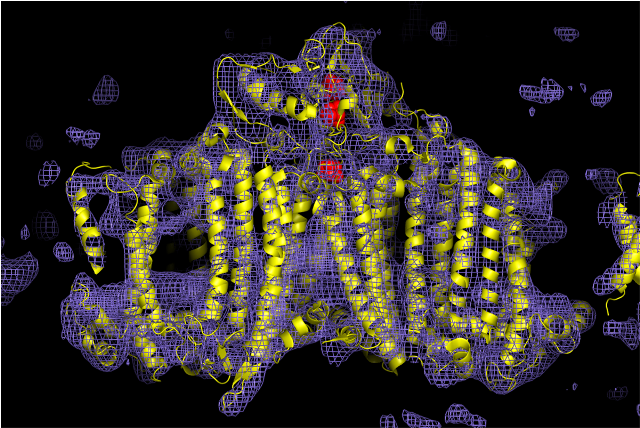 One of the first structures solved using X-ray FEL pulses was the photosystem I complex, which is key to photosynthesis. The experiments with ultrashort X-ray pulses used to obtain this electron density map (purple mesh) proved the concept of "diffraction before destruction" to avoid radiation damage, especially of metal centres such as the iron-sulphur cluster shown in red.
Petra Fromme and Raimond Fromme (ASU)

The UK is taking a leading role in the development of a new scientific instrument that may revolutionise medical research. This new tool will provide incredible insight into the behaviour of some of the most challenging viral and bacterial diseases that currently plague humankind.

Thanks to the SFX consortium, UK scientists will have access to a cutting-edge instrument for structural biology that will capture unprecedented snapshots of the inner workings of important biological molecules. This new facility is currently under construction at the European X-ray Free Electron Laser (XFEL), in Hamburg, Germany.
SFX, which stands for Serial Femtosecond Crystallography, is an international consortium of scientists working to deliver a protein crystallography facility which will enable researchers to analyse the structure of many biomolecules, such as proteins, cells, or membranes, like never before. Using incredibly short and intense pulses of light the SFX facility will capture snapshots of the arrangement of atoms within the biomolecules. Understating the atomic structure of a protein enables scientists to understand how it functions. The pulses of light produced by the European XFEL will be so short that researchers should be able to piece the snapshots together to effectively create a movie of temporal changes, furthering their understanding of the processes taking place within.
Chair of the SFX consortium and lead applicant on the UK proposal, Professor James Naismith of the University of St Andrews, says: “This is an exciting prospect for structural biologists in the UK. The incredible insight that the SFX facility will give us into the function and behaviour of important biomolecules can potentially form a basis for the development of future medicines, such as anti viral drugs, and goes beyond what is currently possible with today’s technology. SFX will help us to tackle medical problems which have so far been out of our reach.” 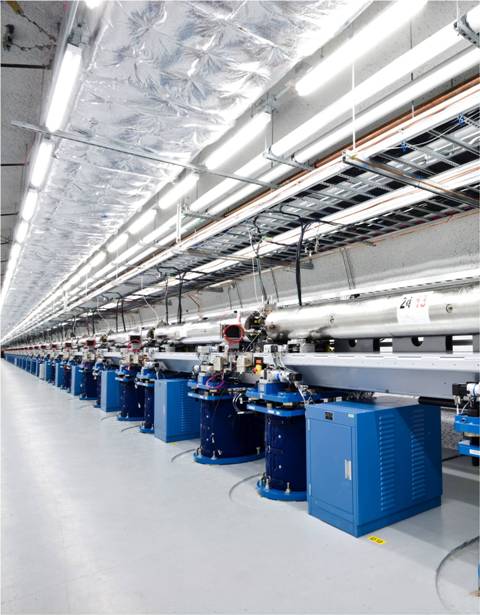 A view of the undulator at the Linac Coherent Light Source at the SLAC National Accelerator Laboratory, California. The undulator is 132 m long. Bunches of electrons from an even longer (1 km) linear accelerator are shot through this device at near the speed of light and converted into X-ray flashes that are a billion times brighter than previously attainable. The linear accelerator currently under construction at the European XFEL will be 1.7 km long, and the electron beam will pass through undulators that are up to 212 m long.
Brad Plummer, SLAC

The UK is a world leader in protein crystallography, a technique that has revolutionised biology. It has led to effective treatments for HIV, new antibiotics, new vaccines (including progress on foot-and-mouth disease), several Nobel prizes, and with the breakthrough in the structure of G protein-coupled receptors, whole new families of medicines. However there are still many problems yet to be solved.
Professor Dave Stuart, Director of Life Sciences at Diamond Light Source and MRC Professor of Structural Biology at the Department of Medicine University of Oxford, says: “Some of the most challenging problems in biomedicine involve proteins or viruses which do not give crystals suitable for examination with current technology. XFELs will radically change this. The light they produce is so intense it can resolve even the most weakly diffracting samples. The pulses of light are so fast that the atoms appear stationary to the pulse and we capture the information we need before the sample is destroyed. The same principle underpins stroboscopic lighting which appears to produce freeze frame images of a moving object.”
Funded by the Wellcome Trust, the Biotechnology and Biological Sciences Research Council (BBSRC) and the Medical Research Council (MRC), along with a number of European partners, the UK efforts of the SFX consortium are led by the University of St Andrews and Diamond Light Source, where Professor Stuart and Dr Martin Walsh, Diamond’s Life Sciences Coordinator, will lead the development of a UK hub for scientists using SFX at the European XFEL.
The UK hub, which will be based at Diamond, will enable users of the SFX facility to fully prepare for their experiments in Hamburg. In-house experts will work with the researchers to ensure that their experimental samples are suitable and flight-ready before sending them off for transit. There will also be a dedicated fibre link from Hamburg to Harwell enabling researchers to carry out data analysis back in the UK. 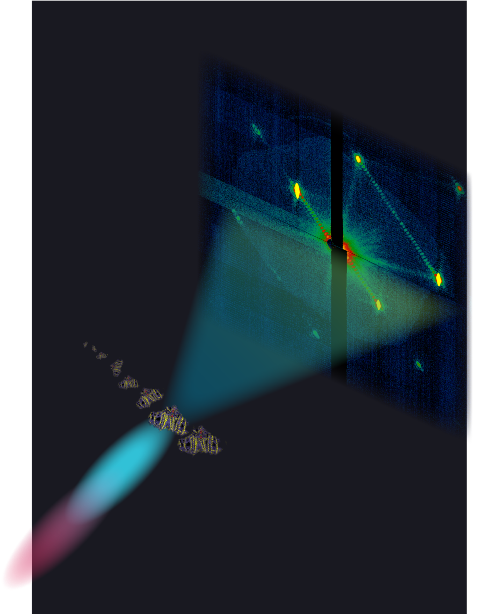 An artist's impression of the method of serial femtosecond crystallography, which is used to determine structural information from crystals too small for conventional methods. The crystals flow across the focused X-ray beam in a microjet and diffraction snapshots are obtained pulse by pulse. The patterns are later combined and used to build up the 3D image of the molecule.
Anton Barty, CFEL DESY

Professor Stuart says: “The UK hub, housed within the existing Diamond infrastructure, will include a dedicated senior scientist and a postdoctoral fellow to facilitate the use of XFELs by the UK community. Support will be offered in terms of sample preparation, data processing and training. This is vital because the experimental set-up and protocols required are not routine at synchrotron facilities, and this capacity must be developed to optimise experimental time at the European XFEL.”
Over five years between 2014 and 2019 the UK funders will contribute £5.64M to the construction of SFX at European XFEL. As a lead partner in the SFX consortium the UK will secure dedicated time during the five year development, and will develop significant expertise in this game-changing technique at the UK hub at Diamond. Following this the UK will be eligible for open access time after peer review, which is likely to be extremely competitive on an international scale. Having secured dedicated time as part of the SFX consortium, and developed expertise at the hub, UK scientists are likely to be well placed to secure experimental time.
Professor Naismith concludes: “It is important that the UK engage in the European XFEL, which will likely become the world leader and experimental time will be highly competitive. For the UK to stay at the cutting-edge a UK XFEL may be needed to ensure that our science base can access the facilities they need. Building a strong UK base now is vital for developing capacity to pave the way for an XFEL the UK.”
Find out more about the UK-XFEL Hub to be based at Diamond.