How ancient fossils are helping scientists create a better future 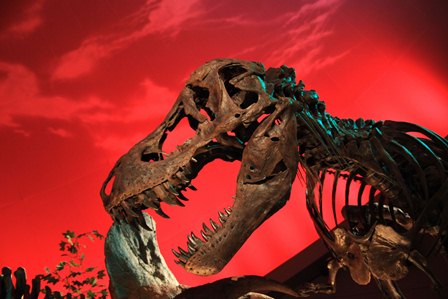 Millions of years after they became interred in the ground, the elemental make up of fossils can still provide vital clues as to how ancient creatures lived and died.

Dinosaurs became extinct about 66 million years ago, but try telling them that. The fossilised remains of prehistoric giants are now helping to create modern miracles, supporting advances in nuclear technology and biomedical research. Mountains of new information has emerged from the study of ancient fossils, as Diamond’s bright beams give long-dead creatures a new lease of life.
This renaissance in palaeontology began about eight years ago, when a group of dinosaur explorers heard about scientists using synchrotron light in the USA to study the chemistry of ancient parchments. By scrutinising the chemical makeup of iron-rich ink on the parchments, the scientists found they were able to read words that had been scraped off the parchment over 800 years earlier. This allowed some of the great works of Archimedes to be read, albeit as a chemical ghost of the former text.
Intrepid palaeontologists were quick to see the possible uses of synchrotron light for their own research. These days, dino experts use machines like Diamond to investigate the chemistry inside fossils, divining secrets about the ancient past from the chemical ghosts. Millions of years after they became interred in the ground, the elemental make up of fossils can still provide vital clues as to how ancient creatures lived and died.
But twenty-first century palaeontology is not just about exploring the prehistoric past; the research that palaeontologists are doing at Diamond is also having a real impact on our future. Phil Manning, from the University of Manchester, is one of the UK’s leading experts on dinosaurs, and he’s keen to highlight the interdisciplinary nature of his field. “All science is core science”, says Phil. “Nothing highlights that as much as palaeontology. This is not just the study of dead animals; the insights we’ve unearthed have impacted on everything, from medicine to engineering.” 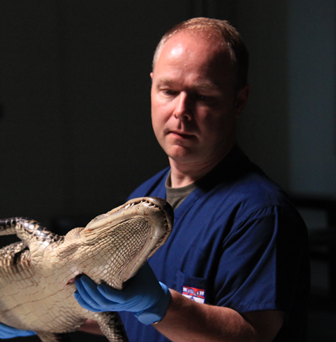 Phil Manning is one of the UK's leading dinosaur experts

Phil works with a diverse team of scientists whose backgrounds reflect the multi-faceted nature of dinosaur research. “Our team is made up of biologists, chemists, engineers, physicists, and computer scientists, to name a few. We approach palaeontology from multiple angles, always looking to ask new questions; and the work we’ve been undertaking at the synchrotron has blossomed, because as we answer one question, it poses a thousand more.”
You wouldn’t have thought palaeontology would have much to do with nuclear waste, but the research carried out by the team from the University of Manchester could help us to engineer a greener future. During their synchrotron studies of dinosaur bone, the team discovered that the bones had locked away certain elements from their surrounding environment.
The team realised that the calcium phosphate that composes bone was the key ingredient that allowed dino fossils to act like a palaeontological mop, taking up radioactive elements from the environment in which they were buried. Now we know that calcium phosphate has these properties, it may be that we can use it to engineer new structures that trap and remediate nuclear waste over long periods of time – a very ancient solution to a very modern problem. Phil adds: “It’s great working with geochemists who have opened my eyes to the pressing issues of nuclear waste storage and how fossils might help provide important data on this problem”.
Those monster bones are also providing information about our own bodies and how we break and heal after trauma. Bone acts as a sink for different trace elements, and when it’s injured, specific chemicals are released by the body that leave a permanent addition to the bones’ chemistry. Palaeontologists are now able to study the healed bones of dinosaurs and work out whether the creature fully recovered or died with unhealed wounds, all based on the chemical traces locked within the fossil. 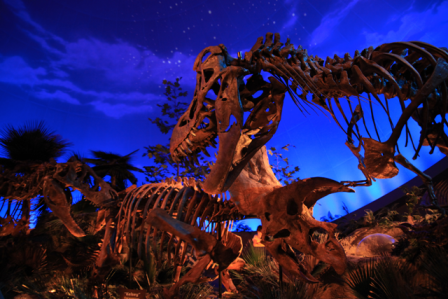 Something that we once thought exhausted in research terms has now returned from the dead and taken on a whole new life.

This is not only important for historical research; there could also be implications for our own fragile frames. Ultimately our bodies’ chemistry is not so different from that of a T. rex. Understanding how bones break and heal, and what trace elements are involved in this process, could help inform future developments in the treatment of injury and bone disease.
This emerging union of the past, present, and future is a relatively modern phenomenon. It’s only with the advent of machines like Diamond and the multitude of techniques associated with it that research into the chemistry of prehistoric life has become possible. The team carried out their research on I18, Diamond’s microfocus spectroscopy beamline. The bright micron-sized X-ray beam allows scientists to map elements and chemistry in complex materials, like ancient bone.
Phil observes: “Thanks to Diamond and other synchrotrons around the world, fossils and other ancient objects are back in the research spotlight. Something that we once thought exhausted in research terms has now returned from the dead and taken on a whole new life.As technology advances we can do more and more with fossil specimens. It doesn’t stop here – there are always more questions we can ask.”
The work of the dinosaur explorers emblematises the way in which science itself is fundamentally interconnected. Creatures that have been dead for hundreds of millions of years are now helping scientists to make advances at the cutting edge of modern research; and that’s because each finding reveals something new about the world around us. There’s no end to the secrets scientists can unfurl, but as Phil keenly points out: “Science isn’t just about answers; it’s about asking really good questions.”