The increasing energy storage needs of electric vehicles and mobile devices is driving research into higher performance batteries. One particular challenge for some applications is safely charging/discharging fast enough, and most materials that offer both high power and fast charging require nanoparticles that are expensive to make and difficult to produce in large quantities.

In order to understand the battery performance of new large-scale battery materials containing niobium and tungsten, a team from the University of Cambridge studied the changes in each metal individually. They used the Core X-ray Absorption Spectroscopy (XAS) beamline (B18) to investigate the chemical changes that occur in their new niobium tungsten oxide batteries to understand how these elements are able to store an unexpectedly large quantity of energy. B18 is designed for XAS measurements, which can distinguish each type of ion and the changes that occur to its chemical state during reaction in a battery.
Their results showed that both niobium and tungsten ions are able to store ‘extra’ charge in the battery, beyond what is usually expected, and that they work together. This is different from many battery materials containing multiple types of ion, where they are usually not active at the same time and some are not active at all. The new battery material is designed to be used as the negative electrode (anode), and to work with any of the many positive electrodes (cathodes) that are used in commercial lithium-ion batteries. 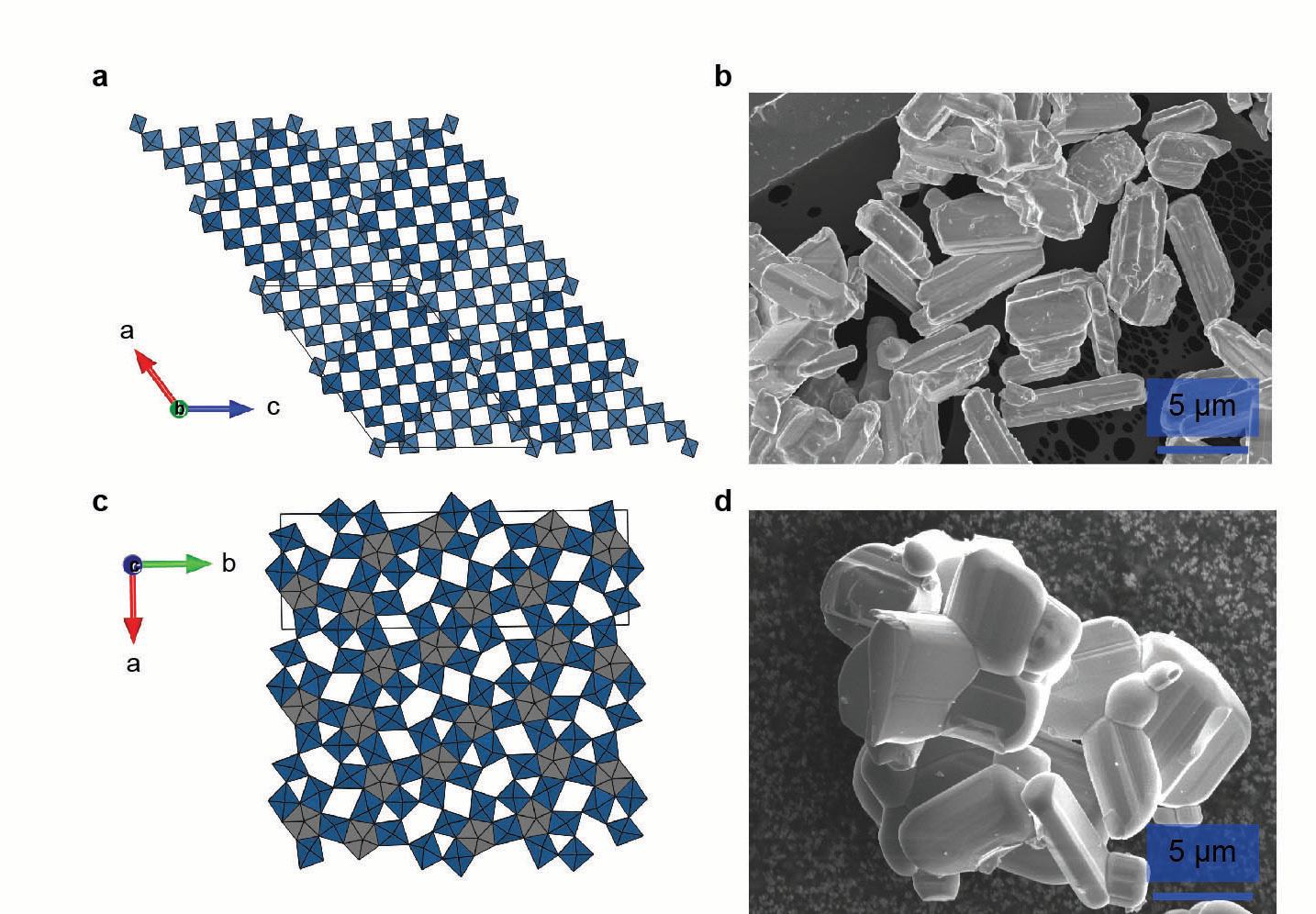 Advanced batteries are required as the world moves toward electric vehicles, intermittent renewable energy sources, and increasingly power-intensive portable electronics and ‘smart’ devices. Modern lithium-ion batteries contain a positive electrode made of a metal oxide and a negative electrode made of graphite. For safety reasons, the use of graphite limits how fast these can recharge or how much power they can deliver. A new negative electrode, in combination with a standard positive electrode, could enable a high-performance lithium-ion battery that can recharge in just a few minutes, depending on the size of the device, which would facilitate new technologies and accelerate the transition away from fossil fuels.

In order for a battery to charge in minutes, the electrode materials inside must allow lithium-ions to move quickly. In practice, the arrangement of atoms in most materials – known as the crystal structure – does not allow sufficient lithium-ion mobility and so the particle size of these materials is reduced down to the nanoscale to shorten the distance that lithium has to travel. However, there is a practical problem with this strategy. Around 100,000,000 kg of graphite are used in batteries annually and this number is expected to triple by 2025; but nanomaterials can be expensive to produce and difficult to scale-up. Conversely, this work involves the discovery of niobium tungsten oxides as a family of materials that exhibit high-rate battery performance with large-scale particles from scalable synthesis methods. 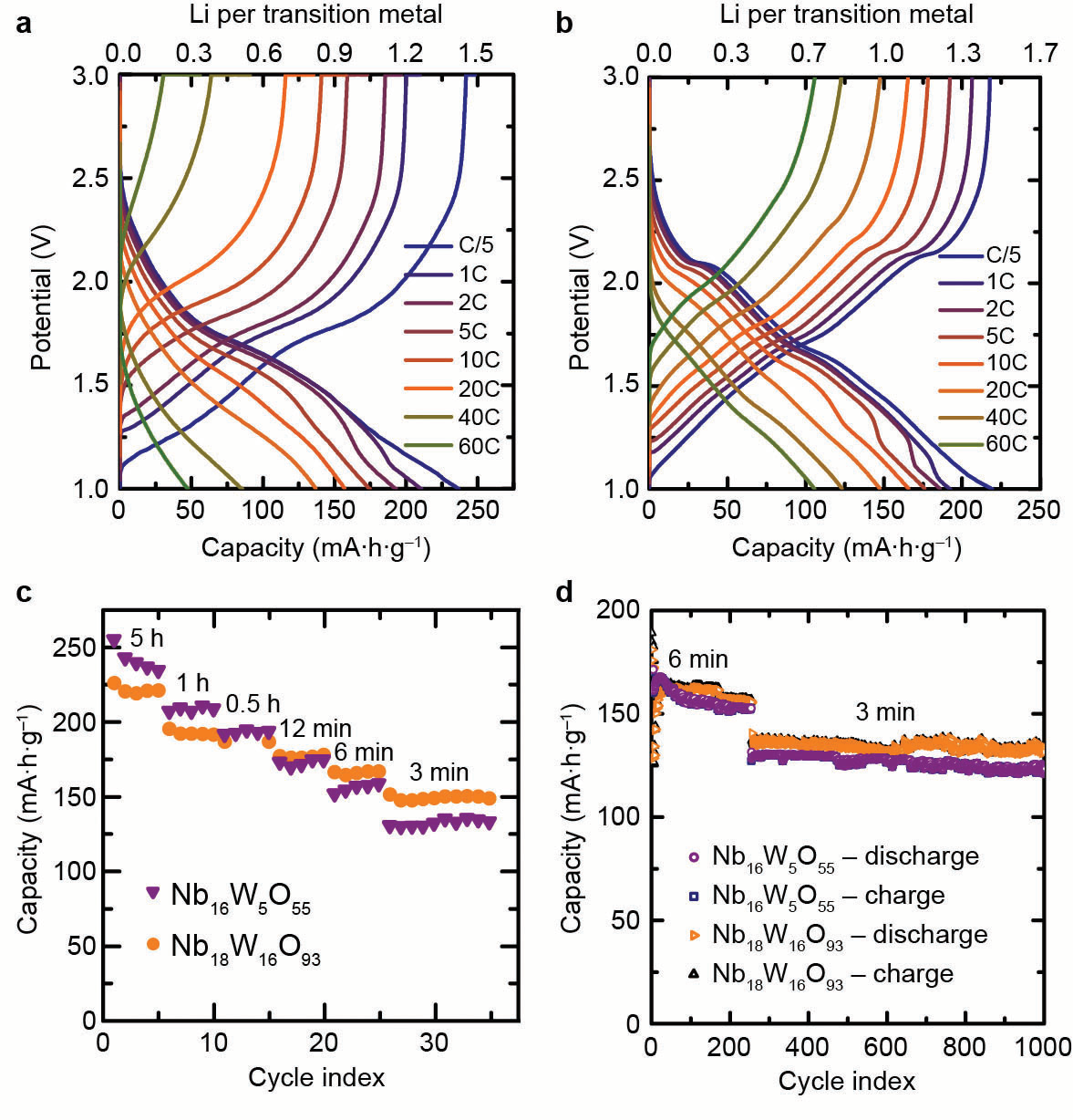 Figure 2: Electrochemistry curves and battery performance of two niobium tungsten oxides; (a)
discharge and charge curves of Nb<sub>16</sub>W<sub>5</sub>O<sub>55</sub> ; (b) discharge and charge curves of Nb<sub>18</sub>W<sub>16</sub>O<sub>93</sub> ; (c)
charge storage capacity for a given discharge/charge time; (d) charge storage capacity for 1000
cycles at 6 min and 3 min rates. In 3 min, the niobium tungsten oxides can reach 60–70% of
the charge that is accessible in 5 h and they can retain >90% of their capacity for 1000 cycles.

The arrangements of atoms in niobium tungsten oxide compounds are extremely complicated and were the subject of an extraordinary effort by crystallographers, in the 1960s (Fig. 1)1,2. This was purely fundamental science at the time. However, thanks to their complex structures, the compounds Nb16W5O55 and Nb18W16O93 are capable of storing a large quantity of lithium with rapid insertion and extraction in large particles that are simple to produce and easily scalable. Electrochemical testing was performed on electrodes comprising the niobium tungsten oxides at different applied currents and for up to 1000 discharge/charge cycles (Fig. 2). The electrodes demonstrated that it is possible to store more than one lithium ion for each metal cation (i.e. Nb5+, W6+), which means that the batteries are able to store more charge. This rather unusual phenomenon is known as multielectron redox and raised interesting questions about the role of the metals.
To understand the chemistry that enables high charge storage capacity, it was necessary to separate the functional role of niobium vs. tungsten. For this role, X-ray Absorption Spectroscopy (XAS) was performed at beamline B18 at Diamond Light Source. XAS is an advanced characterisation technique that can easily distinguish between different elements and follow the chemical and atomic structural evolution that occurs during a reaction such as that of a niobium tungsten oxide with lithium. High-resolution data were acquired on B18 at the niobium K-edge and tungsten LIII-, LII-, and LI-edges for the niobium tungsten oxide host compounds and after electrochemical lithium insertion up to as much as two lithium ions per metal centre (Fig. 3). In addition, a series of spectra were recorded for niobium and tungsten model compounds in different oxidation states that were used as reference spectra for comparison to the electrode materials. The samples were measured in transmission mode, illuminating the entire large particles and ensuring that the results were representative of the whole sample rather than just the surface. Like most partially-discharged battery materials, the samples are sensitive to air and thus a special transfer apparatus was built by beamline scientists with 3D printed components and used to move the samples from an inert argon glovebox to the beamline and to encapsulate an inert helium atmosphere during data collection. 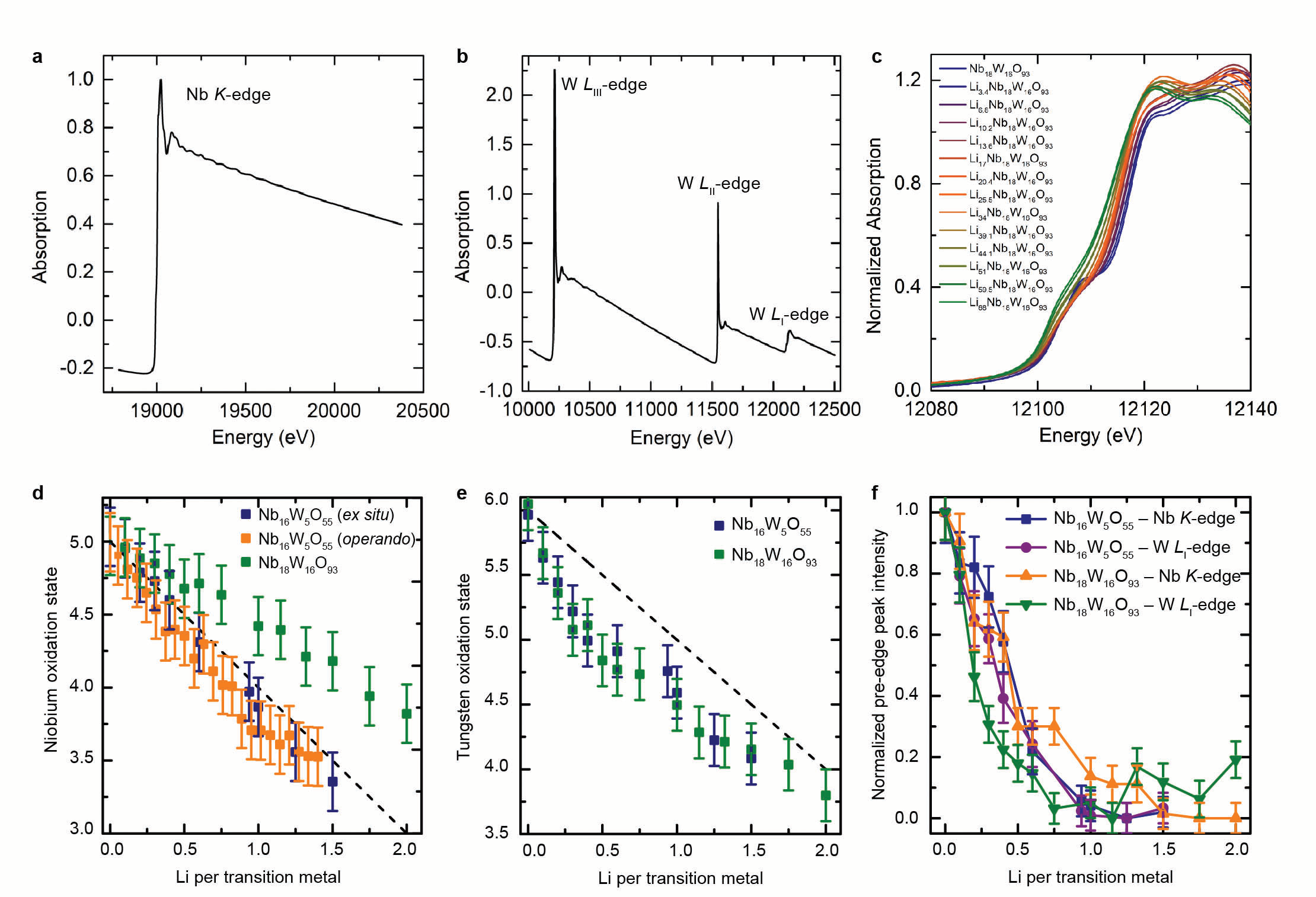 Tracking the absorption of X-rays at different states of charge led to the discovery that niobium and tungsten ions store charge simultaneously and both elements undergo multielectron redox and thus contribute to the high storage capacity of the new materials. Chemical insights from XAS were combined with lithium diffusion measurements from pulsed field gradient nuclear magnetic resonance spectroscopy and operando crystal structure analysis from X-ray diffraction during high-rate battery cycling. In conclusion, this multifaceted investigation provided a wholistic picture for advanced battery performance whereby these metal ions store excess charge, lithium is able to travel through the material with nearly liquid-like mobility, and the atomic structure undergoes minimal volume changes, thus minimal strain as it incorporates lithium. This research provides new electrode candidates for advanced battery technologies and proves that it is possible to achieve fast charging and high power operation with easily-produced large particles. The insights into the mechanism of operation also outline a strategy for future material discovery and design by identifying the key features of high-rate compounds.