Metal-organic frameworks (MOFs) are a class of crystalline materials with a structure of inorganic nodes connected by organic ligands. There are currently more than 60,000 known MOFs, and they are being investigated as promising materials for gas storage, including CO2 sequestration, and hydrogen storage, and can even be used to harvest water in the desert.

The observation that crystalline MOF structures melt into a liquid of identical composition to the parent framework led to the discovery of a new category of glass, distinct from well-known inorganic, organic, and metallic glasses. This prompted an international team of researchers to investigate, mixing even more complex materials to try and combine the properties of several different ‘hybrid’ glasses in the same material.
They used Pair Distribution Function (PDF) measurements on the X-ray Pair Distribution Function (XPDF) beamline (I15-1), combined with electron microscopy, and differential scanning calorimetry, to examine the structure of MOF glassy mixtures, to see whether they mix ‘intimately’, or if the separate components remain within their own ‘domains’. This shows whether the resulting properties come from a fully integrated compound, or from the separate domains, or even from the edges between different domains.
Their results showed that the basic metal-organic ligand connectivity of the crystalline MOF state remains unaffected in each of the individual glass domains present in the material. This is important, as it provides confirmation that the glass is made of domains of MOF structures. 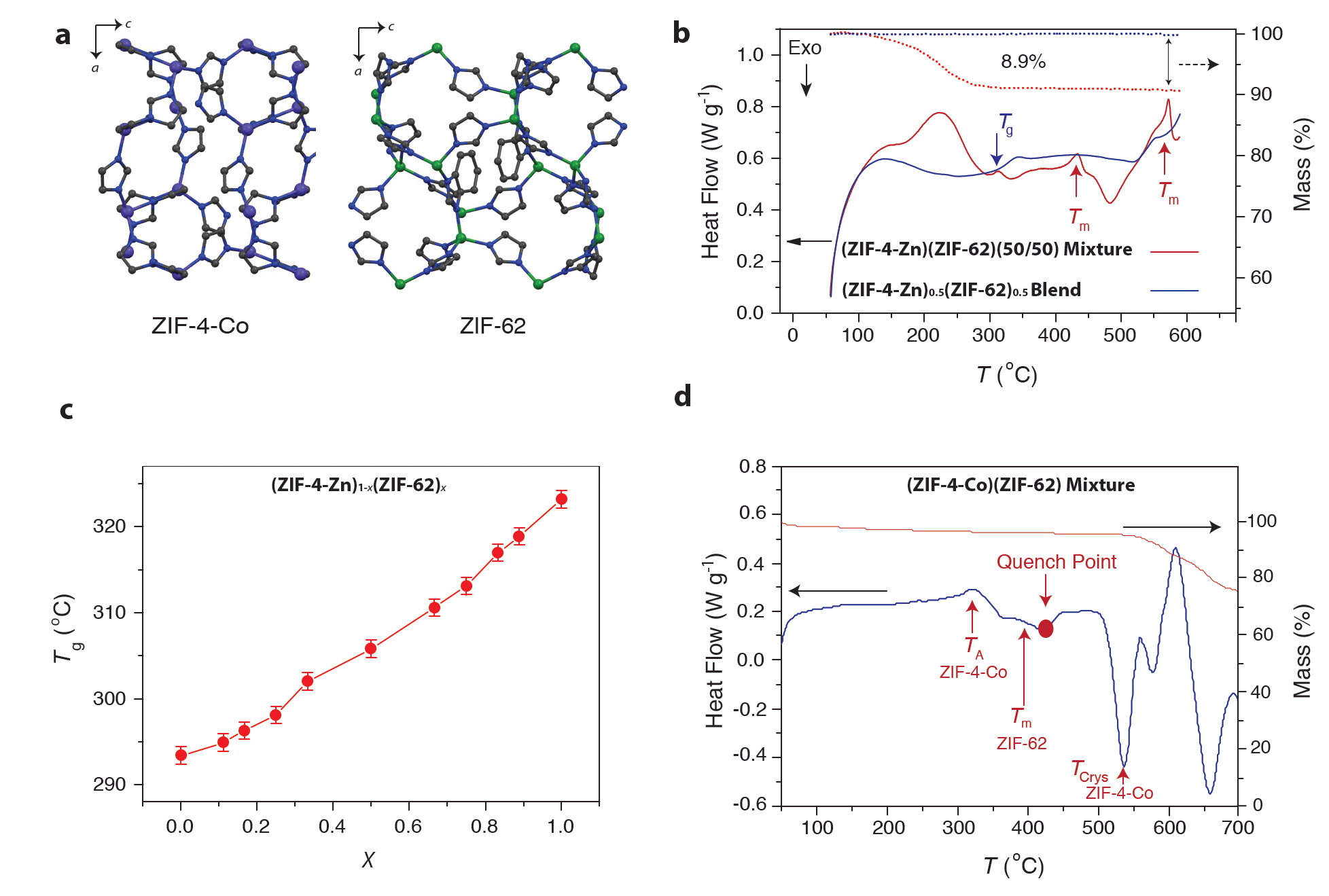 Metal-organic frameworks (MOFs) are fast becoming dominant in research into new materials. These three-dimensional structures are formed from the self-assembly of inorganic nodes, and organic bridging ligands, into highly ordered networks with exceptionally high internal surface areas (>7000 m2 g-1). These ‘molecular sponges’ possess huge, record-breaking porosities; in some cases, the internal surface area of 1 g of a MOF is the same as one-and-a-half football fields. Many applications have therefore been proposed for MOFs, including, for example, H2, CO2, and CH4 gas storage and separations, ion conduction, catalysis, and water harvesting1. Commercial (crystalline) MOF products available include those for the prevention of fruit ripening, and the storage of toxic gases in the semiconductor industry.

The term MOF has predominantly referred to crystalline compounds, which are characterised primarily through crystallography. Glasses are amorphous compounds, meaning they contain no long-range atomic order. Due to this, they do not display Bragg diffraction, and cannot be characterised through traditional crystallographic tools.
We recently made liquids from a MOF family2. These liquids can be quenched to form glasses, which are the first new family of glasses, in terms of their dominant chemical bonding, found since metallic glasses in the 1970s3. These MOF glasses possess an identical short-range order (i.e. atomic bonding below 6 angstroms) to their crystalline cousins, though their structures are far more complex to characterise.
In our quest for ever-greater complexity, we mixed two amorphous MOF components together with the aim of forming a new glass, which allowed us to investigate how these new materials behaved. We were particularly interested in the possibility of forming a single material containing ‘interlocking’ non-crystalline (“glassy”) MOF domains, or, as we termed them, ‘MOF blends’. 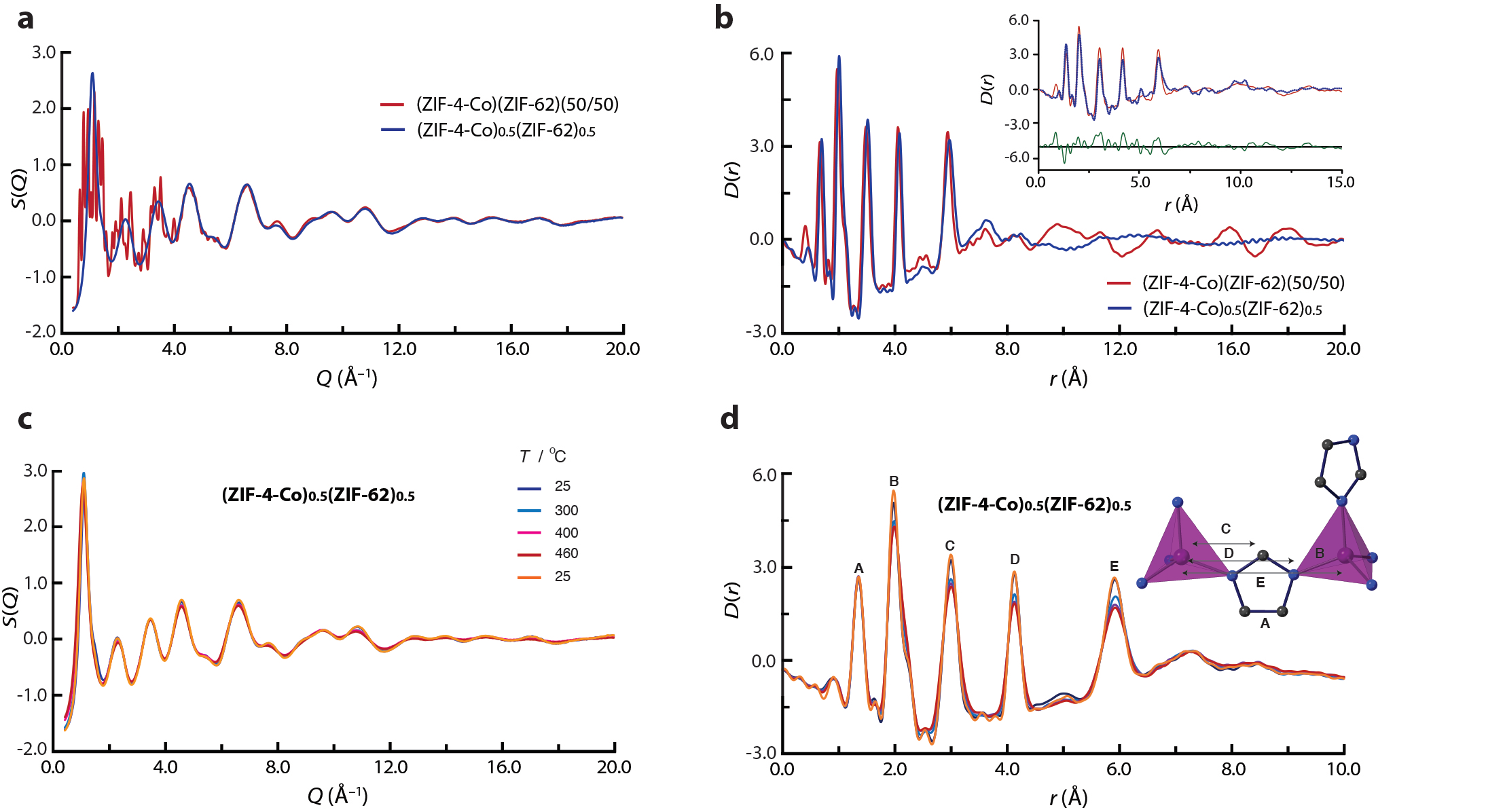 In situ Small and Wide Angle X-ray Scattering (SAXS, and WAXS) measurements were made while heating the two MOFs together. These showed that one component formed a liquid, while the other turned into an amorphous solid. The measurements also showed that the particles coalescence, confirming, along with differential scanning calorimetry results, that the two MOF components had blended together – in a manner seen in pure organic polymers, but not previously observed in MOFs.
However, these data crucially provided no information on the extent of metal-ligand bonding within the glass, and hence couldn’t determine the extent to which the original MOF structures were retained within each domain. High resolution PDF data obtained on the glass, along with the mixture of the two phases prior to melting, demonstrated clearly that the metal-ligand-metal connectivity reminiscent of all MOFs, was retained (Fig. 2).
Specifically, whereas the X-ray structure factor S(Q) of a simple mixture of (ZIF-4-Co)(ZIF-62)(50/50) contained Bragg diffraction, that of (ZIF-4- Co)0.5(ZIF-62)0.5, processed to form an amorphous MOF blend, did not. This rules out small regions of crystallinity in the glass. These data were converted to the corresponding Pair Distribution Functions (PDFs). Interatomic distances at 1.3, 2, 3, 4 and 6 Å were common to both crystal and blend samples, indicating a common local structure and connectivity, and consistent with previous conclusions on near-identical short-range order between crystal, and glass, MOFs.
These prototypical MOF blends are categorised as 'compatible polymer blends', because they have chemically compatible interactions between the two components, and a single glass transition5. Future interesting areas of research will be in (i) generating an immiscible blend with two or more Tgs, (ii) using the techniques illustrated here to produce functional multi-domain glass structures, and (iii) understanding further the reactivity and behaviour of the liquid state. PDF techniques, and I15-1 in particular for our group, will play a pivotal role in the visualisation of these complex hybrid structures.