Diamond Light Source is uniquely placed; with a large number of scientific collaborations and integrated facilities on site, Diamond is a powerful resource for advancing research and allowing for growth. These complementary assets continue to allow us to be a leading facility enabling inter- and multi-disciplinary research.

Diamond’s integrated facilities have continued to expand and improve, allowing more in-depth and longer-term research to take place, truly taking advantage of the expertise here on campus. The official launch of eBIC, with Nobel Prize winner Richard Henderson, was a real demonstration of the excitement in the scientific community around Diamond’s complementary facilities.

eBIC is the first high-end cryo-electron microscopy (cryo-EM) facility worldwide to be embedded in a synchrotron, and its user operations mirror the well-established synchrotron beamline model. eBIC was established following the initial award of a £15.6 million grant from the Wellcome Trust, the Medical Research Council (MRC), and the Biotechnology and Biological Sciences Research Council (BBSRC). After successful review by the Scientific Advisory Committee (SAC) in 2018, eBIC is now fully integrated into Diamond's core programme. The partnerships, and the unique location of eBIC at Diamond, enable scientists to combine their techniques with many of the other cutting-edge approaches that the synchrotron offers.
eBIC provides scientists with state-of-the-art experimental equipment and expertise in the field of cryo-EM, for both single particle analysis and cryo-electron tomography. For the academic user programme, eBIC houses four Titan Krios microscopes, a Talos Arctica, and a Scios cryo-FIB/SEM. In addition, a partnership with the University of Oxford allows users to access a Krios in high-containment located at Oxford.
The last 12 months have marked several key developments for eBIC, including the official opening of the facility by Nobel Prize winner Dr Richard Henderson, who won in 2017 for developing the cryo-EM technique. Dr Henderson noted that, “coupling [cryo-EM] techniques with the capabilities at Diamond creates a unique environment that will help keep the UK at the forefront of world-leading science”. The opening, held with Thermo Fisher Scientific, established eBIC as a ‘one-stop shop’ for structural biology, and one of the largest cryo-EM sites in the world.
The collaboration with Thermo Fisher further expands Diamond’s cryo-EM offerings by providing two new dedicated microscopes and professional cryo-EM services designed exclusively for the pharmaceutical industry. New instruments have been installed, including a Thermo Scientific Glacios Cryo-EM and a Thermo Scientific Krios Cryo-EM at eBIC and the industrial programme is now underway.
eBIC also held a number of successful workshops over the last year, including the ‘Cryo-EM Sample Preparation Workshop’ in October 2018, which focussed on teaching new cryo-EM users how to prepare samples for imaging in a three-day, intensive hands-on course. This was supported by the electron microscopy facility at the Astbury Biostructure laboratory at the University of Leeds, the Institute of Structural and Molecular Biology at Birkbeck College, the Division of Structural Biology at the University of Oxford (STRUBI), MRC Laboratory of Molecular Biology, Thermo Fisher Scientific, Leica Biosystems, TTP Labtech, CryoSol-World, and Quorum Technologies.
The Scios cryo-focused ion beam scanning electron microscope at eBIC also took its first users in October 2018. During this first commissioning allocation period (Oct 18 - Mar 19) the peer review panel chose three groups to work at eBIC on the Scios. Additionally, eBIC director Dr Peijun Zhang gave 15 presentations at international meetings, including the American Association for the Advancement of Science (AAAS) annual meeting, speaking with a panel of world-leading scientists on ‘Infectious Disease; Pushing the Boundaries of Physiology’, where she presented her work in interrogating HIV-1 on a new level.
To date, eBIC has produced 65 user publications, and held its first user meeting in April 2019 in Nottingham in collaboration with CCP-EM and their Spring Symposium.
ePSIC - + 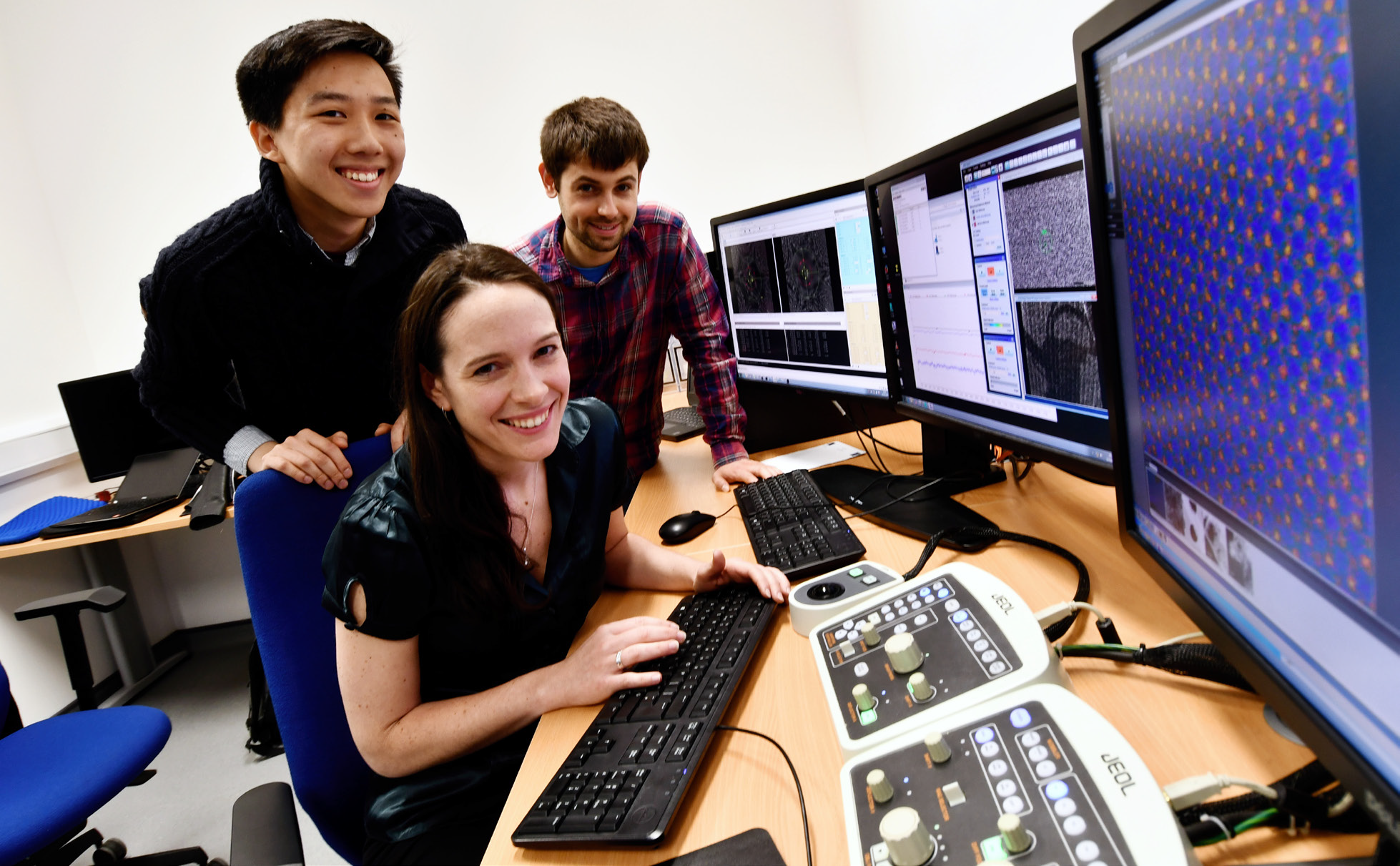 Researchers from the National Graphene Institute at the University of Manchester were the first users of ePSIC. From left to right: Lan Nguyen, Sarah Haigh and Aidan Rooney.

ePSIC at Diamond is a national centre for aberration-corrected transmission electron microscopy. Since its opening in 2017, researchers from around the world have brought their samples to ePSIC to image their atomic structure with sub-ångström resolution.
The two transmission electron microscopes which make up the centre, a JEOL ARM 200 and a JEOL GRAND ARM 300, were brought to Diamond through collaboration with Johnson Matthey and the University of Oxford respectively. In early 2019, Dr Chris Allen was appointed as Principal Electron Microscopist at ePSIC, having run the Oxford side of the collaboration for the previous three years.
The ARM 200 is a state-of-the-art probe-corrected analytical microscope capable of imaging, electron energy loss spectroscopy and X-ray spectroscopy at atomic resolution. It is aligned at accelerating voltages (incident electron beam energies) of 80 and 200 keV.
The ARM 300 is a dedicated imaging instrument aligned across a wide range of accelerating voltages (30 - 300 keV). This enables the experimental conditions to be carefully tailored to the specific sample being studied. The ARM300 is both probe- and imaging-corrected and has numerous detectors including a fast direct electron detector, which can operate at up to 2000 fps. This detector is used for both fast movie acquisition when operating in broad-beam Transmission Electron Microscopy (TEM) mode and for the collection of large arrays of far-field diffraction patterns (4D-STEM) when operating in focused probe STEM mode. These combined capabilities have enabled ePSIC to become an international leader in cutting-edge material science electron microscopy and is a unique resource within the UK.
With in situ sample holders, users at ePSIC can perform variable temperature measurements from 100 to 1,600 K to directly image the atomic structure of materials during thermally driven transitions. This in situ capability will be expanded upon over the coming year with the arrival of a new holder, which will allow simultaneous temperature control and electrical biasing of the sample.
The state-of-the-art instrumentation available at ePSIC has attracted both established electron microscopists looking to develop new techniques and scientists with limited previous electron microscopy experience interested in understanding the atomic structure of their samples. The collaboration of the expert staff at ePSIC with this wide range of users is helping to bring cutting- edge microscopy techniques to the wider material science community.
MPL - + 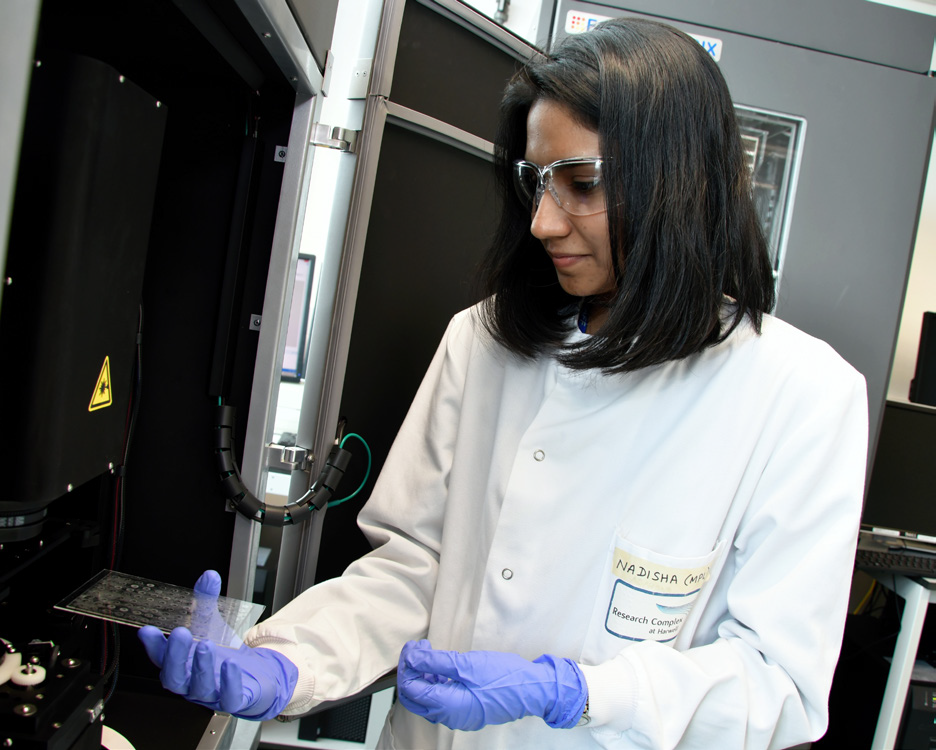 The MPL is a well-established, state-of-the-art facility that enables membrane protein research, and was established to assist researchers investigating proteins that are embedded in the membranes that coat thousands of cells in the body. It provides the tools, resources and know-how that allows scientists from around the world to visualise their protein of interest on the atomic scale.
In 2018, the facility moved into the Research Complex at Harwell (RCaH) to contribute to and take advantage of the Harwell Cell and Structural Biology Partnership. Dr Andrew Quigley, MPL Facilities Coordinator, notes: “With the RCaH located next to the synchrotron we will continue to maintain our close proximity to the beamlines, allowing MPL staff and users to collaborate closely with beamline staff to create a highly productive working environment.”

The MPL is open to user applications from anywhere in the world, and proteins crystallised here have been used in experiments in other facilities. Two forthcoming papers will describe work supported by the MPL that has led to a series of successful X-ray Free Electron Laser (XFEL) data collection visits to SACLA-Japan by a team of scientists from the National Physical Laboratory (NPL), Diamond (I24 and XFEL teams) and collaborators from the University of Oxford (Department of Biochemistry).
Recently published work in Nature Communications1 details a collaboration between a worldwide team of scientists and the MPL that has led to the structure of a Sodium coupled sialic acid symporter, an important energy source used by many pathogenic bacteria which has an additional role in helping bacteria to evade the immune response. Also, research published in the journal Methods2 in collaboration with the MPL discussed various approaches, methods and techniques that can be used to support successful membrane protein crystallisation, and also reviews membrane protein serial crystallography, including data collection and management from multiple membrane protein crystals.
References:
XChem - +

Diamond’s XChem facility specialises in X-ray structure-accelerated, synthesis-aligned fragment medicinal chemistry. Integrated into the I04-1 beamline and nearby Lab XChem, it offers a highly streamlined process for full X-ray screening experiments. XChem allows up to 1,000 compounds to be screened individually in less than a week (including 40 hours of unattended beamtime). The process covers soaking, harvesting automatic data collection, and data analysis.
This year has seen some exciting developments for the XChem facility. The team collected their 100,000th crystal in October 2018, only three and a half years since the inception of the XChem programme. Alongside this exciting milestone, the XChem computational team released the alpha version of their Fragalysis software; a web-interface tool which reviews XChem hits and generates the next follow up series.
Other developments this year included an expanded lab space and capacity, to meet the MX users’ higher demands on the facility, as well as increased XChem beamtime. A dedicated XChem support team has been put in place to assist with research. Additionally, XChem Block Access Group (BAG) access has been rolled out in the user programme, and the first XChem BAG user came during April 2019.
From Spring 2019, XChem users will be able to run even faster gridscans and X-ray scans using new beamline electronic controls including the Zebra signal controls box, similar to Diamond’s other MX beamlines, further integrating XChem within the MX workflows. This is happening alongside continuous improvements to dataset delivery times; already these have increased from 18 to 22 datasets per hour in January 2019, and will see a further increase to around 30 datasets per hour in a new, fast, fully automated X-ray centring mode in the spring 2019 period.
XFEL Hub - + 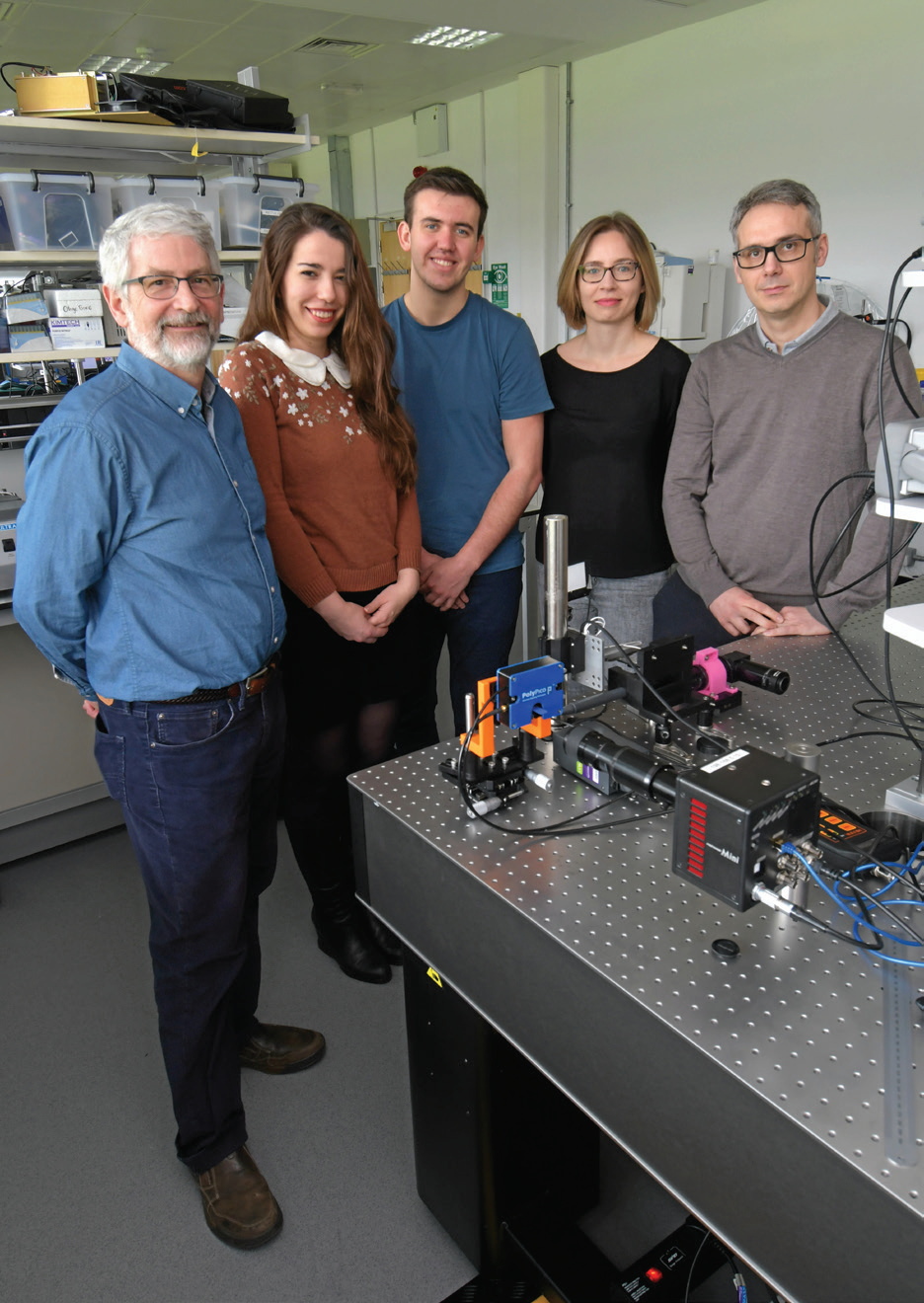 Funded initially by the Wellcome Trust and the Biotechnology and Biological Research Council (BBSRC), the XFEL Hub at Diamond aims to provide expertise and support to the UK community engaged in XFEL-related research; from experimental conception to beamtime proposals, through sample preparations and testing, to XFEL data collection, analysis, and publication.

Now in its third year of activity (from October 2015), the XFEL Hub at Diamond underwent a comprehensive external international review, as well as a review by the Diamond Science Advisory Committee (SAC). The results of those reviews were very positive, which has stabilised the group within Diamond, and will allow the Hub to continue to provide travel assistance to the UK life scientists who are awarded XFEL beamtime around the world.
In addition to this, Principal Beamline Scientist for the XFEL Hub, Dr Allen M. Orville, received two five-year grants, which will help to further enable time-resolved structural biology research at storage ring beamlines like Diamond’s I24 and VMXi, XFELs, and with cryo-EM methods. In addition to these overarching goals, the Wellcome Investigator Award in Science will support up to four PDRAs over the course of the grant, who will contribute toward research and development efforts in biophysics, serial MX, computational, and/or instrumentation. The Royal Society Wolfson Fellowship will provide for a four-year PhD studentship that will exploit synergistic sample delivery and manipulation method between XFEL and cryo-EM communities.
The XFEL Hub has achieved a number of exciting research successes1,2, and an in-depth story and podcast appeared in Chemical & Engineering News. As another example, during four 12-hour shifts in December 2018 at the Linac Coherent Light Source (LCLS) / Macromolecular Femtosecond Crystallography (MFX) Instrument, the XFEL Hub and its collaborators collected 54 datasets of correlated time-resolved serial femtosecond crystallography (tr-SFX) and time-resolved X-ray emission spectroscopy (tr-XES) from about 12 types of metalloenzymes. Producing diffraction data to better than 1.3 Å resolution and consuming less than 1 mg of enzyme per dataset, this was, to our knowledge, a record for productivity at the instrument. Additionally, the XFEL Hub and its contributors also received and executed two beamtimes at SACLA in February 2019, wherein they installed and used the acoustic tape drive system at SACLA for pump-probe tr-SFX, which also correlated with tr-XES. About 20 tr-SFX datasets were collected from three different phytochromes that exploited five different illumination schemes.
References: