The major achievements of the Detector Group in the past year were the consolidation of the Excalibur detectors1, which now run very reliably with the ODIN-DAQ framework2, the release of the Xspress4 pulse processor to the users of beamline I203, the full characterisation of the second demonstrator of small pitch Ge detector, the conceptual design of the arc-detector for beamline I15-1, and substantial progress with the Tristan project. 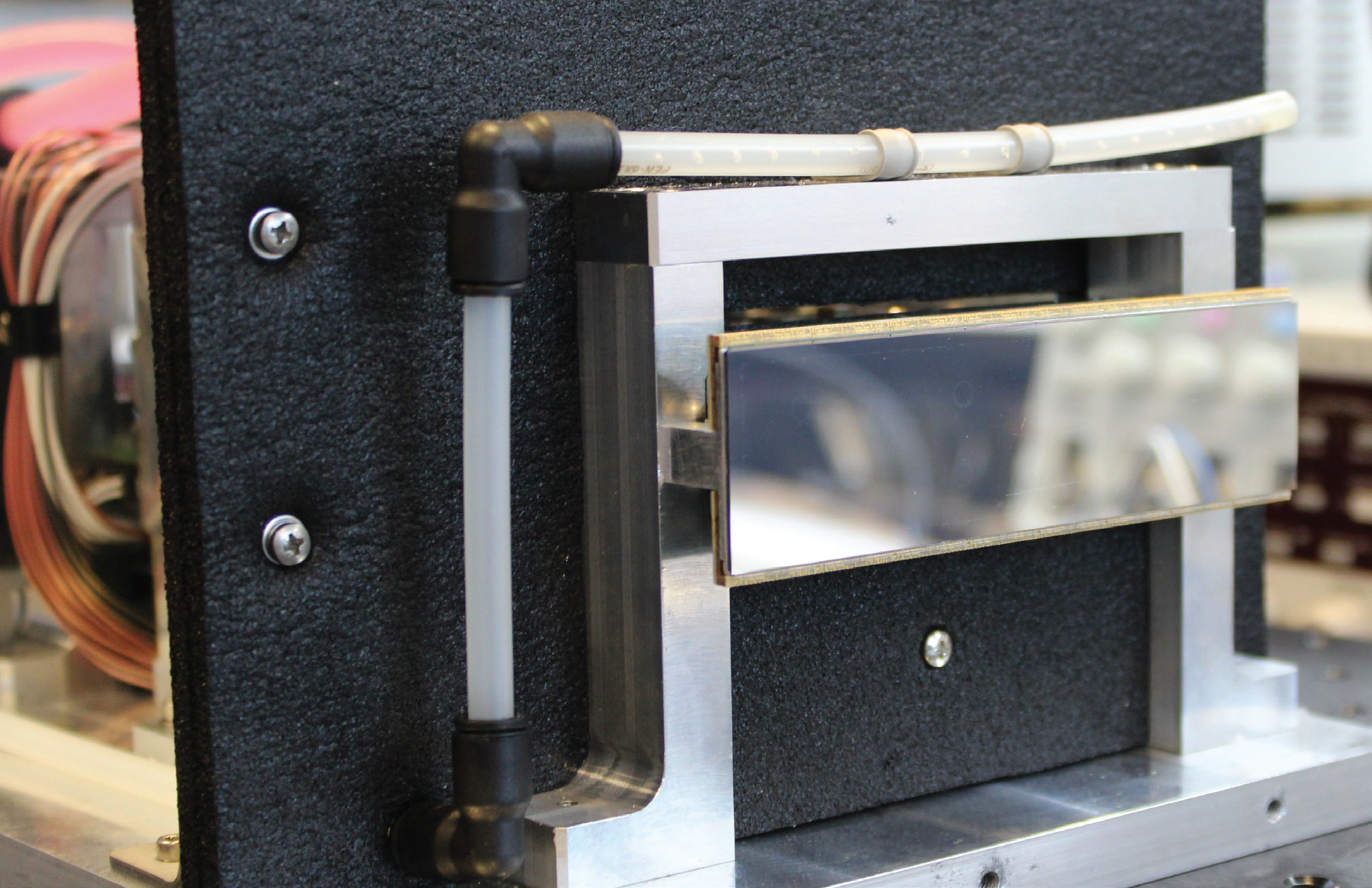 Figure 1: The 1 million pixels sensor module mounted on the Tristan1M framework, ready to be powered up for operations.

The Tristan project can be considered the most innovative detector system that the Detector Group is currently developing. Tristan is based on the Timepix3 read-out ASIC which works in event driven mode (time stamp and location of an event sent out for any occurrence)4, rather than in frame based mode. The time stamping capabilities of Timepix3 make it, conceptually, a very good detector for time resolved experiments.

The first module of the Tristan detector was assembled, mounted in the appropriate frame to make up the so called Tristan1M. Following that, a first test was carried out at beamline I19 with the full infrastructure in place. One Tristan module is made up of 16 Timepix3 chips, organised in an 8x2 matrix, which are bonded to a monolithic silicon sensor. The total sensitive area is approximately 113.8 mm x 28.3 mm. The module mounted on the mechanical framework of Tristan1M is shown in Fig. 1.

Figure 2: Reconstructed diffraction image of the events due to single crystal diffraction which are recorded by Tristan. The test was carried out at I19.

The data from the 16 chips of one module are acquired and formatted by the FEMII card, which was developed by the Science and Technology Facilities Council (STFC) under the CfI programme, and which is used in the Xspress4 pulse processor, and in the Arc-detector for beamline I15, which is under development. The FEMII card sends the data to a Linux server through a 10 Gbit/s fibre optics link. The Linux server runs the ODIN-DAQ framework as data acquisition software and sends the data to storage through an Infiniband connection. The data are stored in HDF5 format.

When the first test of the Tristan1M was carried out at I19, all the data infrastructure was in place and was working correctly. The test consisted of recording the diffraction pattern from a crystal which was rotated 360° around its axis. Fig. 2 shows the image which is reconstructed from all recorded events during a complete revolution of the crystal around its axis. The data validation is in progress and we are preparing the next test that will consist of data from a dynamic experiment pump and probe experiment.
At the same time the development of the Tristan10M (10 modules in a 2x5 matrix for a total of 160 ASICs running in parallel) is in its final stage. After the production of the modules, the assembly of the full detector and final development of the software will follow.

Another important ongoing project is the development of an arc-detector for I15-1 based on CdTe sensors and Medipix3RX. The project is at the conceptual stage. Most of the concepts have been defined and we are starting the detailed design of some parts. The detector will consist of an array of monolithic CdTe sensors with a format of 256 x 768 pixels with 55 micron pitch. Each sensor is bonded to three Medipix3RX ASICs to make up a hybrid. Twenty-four hybrids are then arranged in an arc as shown in the sketch in Fig. 3. The 24 hybrids will cover 110°. The system will then drive 72 ASICs in parallel. Two FEMII cards will be the read-out electronics that will be located in a rack a few metres apart from the detector head. The data channel between the detector head and the FEMII cards will be made out of fibre optics links generated by a number of ancillary small FPGA cards located on the arc.

The Xspress4 pulse processor proved to be very successful as a read-out system of the 64-element Ge detector of I20 and very popular with the beamline users. Therefore, it was decided to build another system to read-out the 36-element Ge detector of B18 that uses the same technology and therefore expected to give the same improvement in performance. 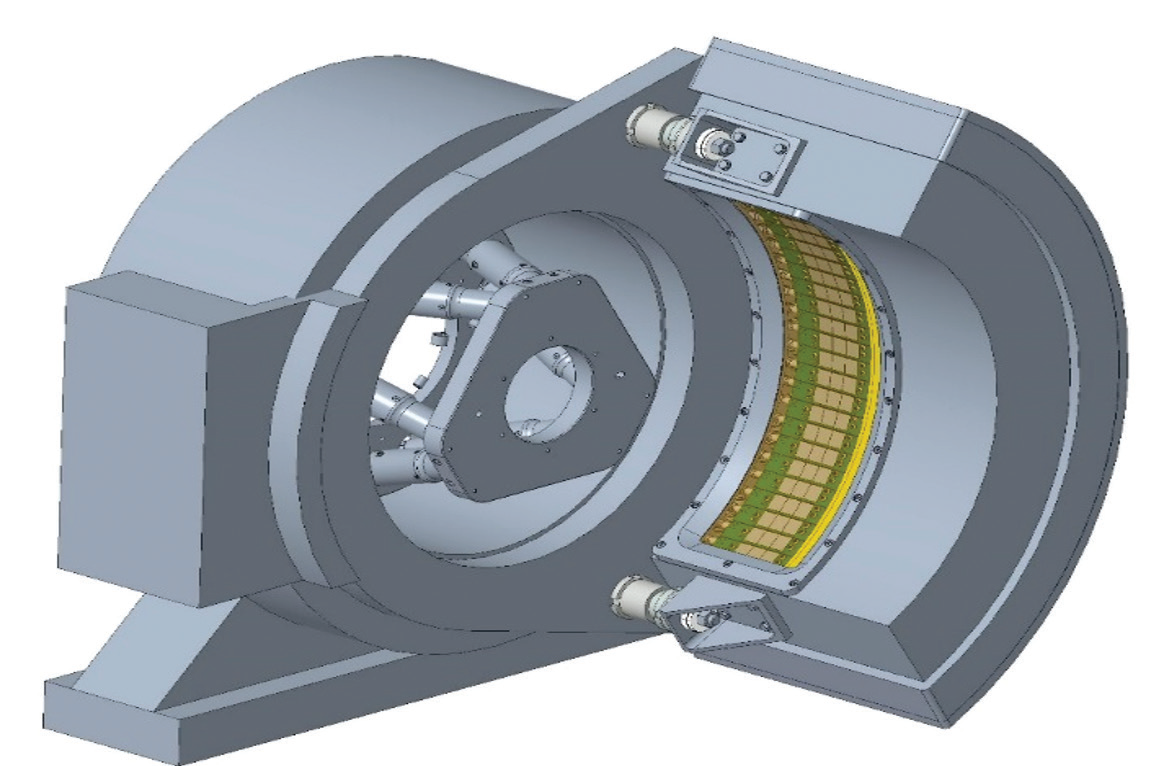 Figure 3: Engineering sketch of the
I15-1 arc detector structure. The
layout of the 24 hybrids, which
cover an angle of 110°, is clearly
visible.

The Xspress4 pulse processor was also used to read-out the 19-element Ge detector demonstrator currently under evaluation by the Detector Group. The Xspress4 proved to be effective also with this detector and enabled read-out in parallel to all the 19 channels, both in laboratory tests and in tests at the Test beamline B16. The cross-talk correction characteristics of Xspress4 worked effectively also with a detector using a different technology with respect to those in use at I20 and B18. This proved that the Xspress4 can be applied to a variety of detector systems. A patent granted to the Xspress45 recognises this concept as highly innovative.

Further developments of the firmware of the pulse processor together with its time stamping capabilities, and the channel to channel communication capability, enabled it to reject the charge shared events of the demonstrator. In summary, this development proved that the Xspress4 can be used as a read-out platform for future multi-element Ge detectors, should Diamond wish to upgrade this technology. Currently we are pursuing a collaboration with Synchrotron SOLEIL to further develop the demonstrator, and to develop higher segmentation Ge detectors for X-ray Absorption Fine Structure (XAFS) experiments.