Current production process for vinyl chloride, the monomer used in PVC and everything from piping and tubing to gels and lubricants, relies on a mercury-based catalyst. Mercury is one of the most toxic substances on the planet, and the UN recently ratified the Minamata Convention, meaning that a more environmentally-friendly alternative is required.

It has been shown that gold supported on carbon could be used as an alternative catalyst for this reaction, and although it is currently being commercialised its behaviour under harsh reaction conditions has never been investigated. The reaction is typically carried out at 200°C, using corrosive gas mixtures that can rapidly deactivate catalysts. X-ray absorption spectroscopy (XAS) is the ideal tool for observing the reaction in situ, and the quick acquisition time available on B18 gave a team of researchers the time resolution needed to see activation and deactivation during the reaction.
Their results offer the first example of a single site catalyst remaining atomically dispersed and working under such harsh reaction conditions, and will enable more rational catalyst design to find a replacement for the current mercury catalyst.

The production of vinyl chloride monomer (VCM) as the precursor to polyvinyl chloride (PVC) is a major industrial process. In particular, 42 million tonnes of PVC had being consumed in 2016, constituting 16% of total plastic demand1. The production of VCM through acetylene hydrochlorination (the reaction of acetylene with HCl) using a mercuric chloride based catalyst is the dominant method of VCM production in coal rich areas such as China. However, the catalyst losses significant amounts of mercury, posing a great risk to the environment. The recently ratified Minamata convention has outlined that VCM production must move to mercury free production by 2022, necessitating the development of a new commercial catalyst for VCM production.

This need had been recognised previously and led, in 1985, to the prediction of gold based catalysts as effective for this reaction. This prediction was based on correlation of activity with the standard electrode potential of metal chlorides supported on carbon and has been subsequently proven experimentally, leading to the exponential growth in the field of gold catalysis. With the legislative pressure to replace the current catalyst system Au/C has become a viable alternative due to its stability, limited metal toxicity via loss to the environment and high selectivity to the desired product2.
To date effective catalysts have been studied which were prepared by impregnation of a gold precursor (HAuCl4) with an acidic solution of aqua regia (a mixture of nitric and hydrochloric acid). This impregnation method prevents the agglomeration of large metallic Au nanoparticles which are readily seen when impregnating the precursor in aqueous solution and have been shown to be inactive. Despite this observation, there remained in the literature confusion about the active form of the catalyst with many active catalysts appearing to contain metal nanoparticles. Multiple examples of active catalyst showed the predominant species present to be metallic Au by characterisation methods such as X-ray photoelectron spectroscopy (XPS) despite no observation of metallic gold by bulk diffraction methods such as X-ray diffraction (XRD). Commonly, minority cationic components of Au (I) and Au (III) were observed which led to the hypothesis that cationic Au at the periphery of the larger nanoparticles was the active site for the acetylene hydrochlorination reaction3.
To prepare the most active catalyst the highest utilisation of the active phase is desirable, therefore the determination of the cationic species as either the active sites or a spectator species is essential. It has also been reported that HAuCl4 can be susceptible to photo-reduction by XPS which could result in the metallic phase being over estimated in these catalysts materials when analysed ex situ. In addition, characterisation of these materials by TEM revealed the presence of some amorphous Au-chloride structures which sintered to nanoparticles under the electron beam. These observations demonstrate the limitations of characterising this material ex situ because of the sensitive nature of the nanostructures to beam damage3.

To gain a greater understanding of the active form of the catalyst under operating conditions, a reactor system was designed in consultation with beamline B18. The designed reactor allowed the research team to simultaneously acquire X-ray absorption spectra, at the Au L3 absorption edge, while carrying out an acetylene hydrochlorination reaction at realistic reaction conditions with product analysis by mass spectrometry (Figure 1). This allowed for the correlation of the performance of the catalyst with Au oxidations state and co-ordination environment as determined by the X-ray absorption spectra. Reactions were carried out at 200 °C with 100 mg of 1% Au/C catalyst prepared using the aqua regia impregnation method and 50 ml min-1 of gas flow containing acetylene (C2H2) (2.35 vol%), Hydrogen Chloride (HCl) (2.4vol%) and Argon (Ar) as carrier gas. Using the quick acquisition time available and the x-y movable stage it was possible to record XAS spectra at three points through the catalyst bed, every three minutes during the extended reaction.

Utilising the quick acquisition times and element specific absorption the resulting smaller absorption cross sections, when compared to XPS, made it possible to characterise the catalysts with minimal photo reduction. This gave a more representative characterisation of the Au species present in the catalyst, which are particularly sensitive to photoreduction.
The first key observation was in the characterisation of the fresh catalyst material. Analysis of the X-ray Absorption Near Edge Structure (XANES), specifically using the normalised whiteline absorption height and a linear combination fitting analysis, with Au(III), Au(I) and metallic Au standards, revealed that the Au in the catalyst was in a cationic form with no indication of metallic Au. This was further confirmed by the Extended X-ray Absorption Fine Structure (EXAFS) analysis which demonstrated no intensity in the Fourier-transform characteristic of Au-Au but only Au-Cl bond distances, signifying that the Au species were isolated in the catalyst rather than forming metallic nanoparticles4.
The catalyst samples were then heated to 200 °C under an inert atmosphere, where the XAS again suggested that the samples were free of any metallic Au nanoparticles structure. During this it was possible to observe the decomposition of the AuCl3 type species into AuCl like species corresponding the decomposition temperature of AuCl3 to AuCl at around 160 °C. On the introduction of the reactant gases the Au speciation evolved, initially through re-oxidation to a Au(III) species before equilibration to a stable Au(III) [30%] : Au(I) [70%] ratio with no characteristic Au – Au scattering distances present throughout this equilibration process. Analysis of the VCM productivity acquired at the same time as the XAS, revealed an induction period where the catalyst is becoming more active over time until equilibration at steady state. This induction period was able to be correlated with the Au(III) : Au(I) ration of the catalyst material (Fig. 2). At all points, no metallic Au was detected. A subsequent high-angle annular dark-field scanning electron transmission microscopy (HAADF-STEM) analysis, optimised to reduce beam damage, confirms the observation of isolated Au species in the fresh catalyst material (Fig. 3). 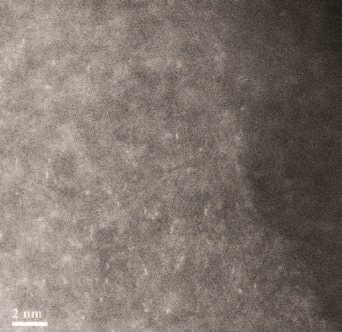 This study provided the evidence that the isolated cationic Au species present in the catalyst were in fact the active species and damage and photoreduction of the catalyst materials through ex situ characterisation masked and confused the interpretation of the active form of the catalyst in previous studies. By characterising the catalyst during the reaction, the research team were able to conclusively show that the active catalyst for this reaction is isolated cationic Au sites akin to homogenous catalysts. This provides an opportunity to design the ligand environments around the Au centre to improve catalyst activity and stability which could result in Au becoming the replacement for the mercury based catalysts for VCM manufacture. In fact Au/C catalysts have been successfully operated at a commercial scale and look set to lead the reduction in mercury usage in this large scale industrial process5.