The data storage on which out smartphones, tablets and computers rely works via electrical fields (e.g. flash drives) or magnetic fields (e.g. hard drives), but research into magnetoelectric materials could lead to a new generation of multifunctional devices that use a combination of the two.

They then used I06’s X-ray PhotoEmission Electron Microscope (XPEEM) to image – in real time- how changing the electric properties results in a change in the magnetic state. Their results are an important step towards exploiting cross-coupling to make new multifunctional devices that work well at room temperature, opening up new directions for creating low ‘spintronic’ devices that make use of an electron’s spin, as well as its charge. 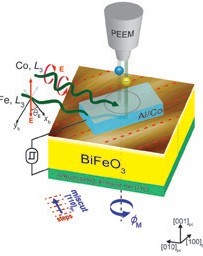 Figure 1: Schematic diagram of in situ ferroelectric switching during XPEEM imaging to study exchange coupling between monodomain BiFeO<sub>3</sub> and Co overlayer, whose magnetic end electric configurations are depicted in the right panel. The magnetoelectric heterostructure is shown as mounted in the XPEEM, with incoming circular and linear polarised light used for circular dichroism (XMCD) on Co and linear dichroism (XMLD) on Fe, respectively. The antiferromagnetic configuration of the sub-surface (i.e. bulk) BiFeO<sub>3</sub> has been determined by neutron diffraction. The ferroelectric state of the BiFeO<sub>3</sub> can be switched by 71° from the 'down' to 'up' state, allowing the properties of the ferromagnetic Co and surface antiferromagnetic BiFeO<sub>3</sub> layers to be characterised in both states.

We find ferromagnets and ferroelectrics all around us: our latest credit cards have both a magnetic stripe and a ferroelectric memory chip on it. Yet usually they are different materials placed in separate locations, just like on the card. Multiferroics are materials in which both magnetic and ferroelectric properties coexist intrinsically in the same material, and offer the possibility to combine normally spatially–separated functions into a single device with multiple functions, as well as drive new device paradigms. This could drastically increase the performance and reduce the size of future circuits. The biggest challenge is to understand just how these properties are internally coupled and then how to exploit this coupling to design new multifunctional devices. On Diamond Light Source’s I06 Nanoscience beamline, researchers have made an important step to show how multiferroic coupling can be exploited to make a new, robust multifunctional device working at room temperature. Using monodomain epitaxial thin film heterostructures of the most promising multiferroic, BiFeO3, I06’s X-ray photoemission microscope (XPEEM) has imaged how the ferroelectric properties can deterministically control the magnetic orientation of a ferromagnetic overlayer only a few atoms thick. Switching the BiFeO3's ferroelectric state between 'up' and 'down' controllably and reproducibly rotates the ferromagnetic orientation of the overlayer by 90º. This opens up new directions for creating fast, low-power 'spintronic' devices (microelectronic devices that use the electron's spin as well as its charge) by exploiting the multiferroic properties of BiFeO3. 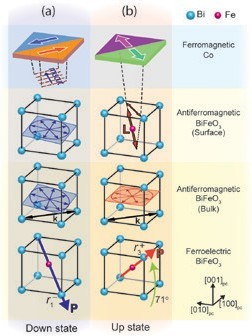 Figure 2: Combining the XPEEM results with neutron diffraction measurements that measure the bulk antiferromagnetic properties, the results are shown in a and b. The top-most panel in (a-b) shows how the Co layer rotates in-plane by ~90° when the BiFeO<sub>3</sub> ferroelectric polarisation (<b>P</b>) is switched 71° from 'down' to 'up' states (bottom panel). The coupling mechanism is through the antiferromagnetic spin–cycloid (circle with radial arrows) at the BiFeO<sub>3</sub>surface that converts from a pure cycloid in the 'down' state to a collinear axis L only in the 'up' state.

Staying ahead of Moore’s Law – which predicts a doubling of the number of transistors in microelectric circuits every two years – is driving the search for new device functionalities, which in turn require the discovery of materials with new properties that can be controlled by applying a voltage or current. Multiferroic materials, especially 'magnetoelectrics' that show coupled magnetic and ferroelec tric properties in the same phase, offer great promise to satisfy these requirements1,2. Thin films are necessary for any device that should eventually be integrated into a large-scale circuit, and epitaxial growth of films also offers the opportunity to control and even improve certain properties of a material ascompared to its bulk counterpart. For example, in silicon films the electron mobility can increase under certain conditions of epitaxial strain (i.e. squeezing or stretching the crystal in two directions, leaving the third direction free to adjust), thus allowing higher operating speeds. Epitaxial strain can also improve the properties of ferroelectric films influenced by the size and distribution of domains, adjacent volumes in which the polarisation points in different directions. For BiFeO3, the deleterious effect of multiple domains was eliminated by creating large-area BiFeO3 films possessing only a single ferroelectric domain – 'monodomain' films, with the desirable property that there is only one, well-defined direction of the polarisation P in either the 'up' and 'down' states3. In magnetoelectric BiFeO3, the magnetic organisation of spins on the Fe sites is antiferromagnetic, i.e. moving from one Fe site to the next, the magnetic spins point in opposite directions. In bulk BiFeO3, the spins have the added complexity that they rotate slightly going from one site to the next, completing a full rotation over a distance of about 62 nm in bulk (the period of the so-called 'spin–cycloid'). The cycloid is expected to create problems for any BiFeO3–based magnetic device, since over large areas there is no single direction of the magnetisation, as there is in simple collinear antiferromagnets. To complicate matters even more, in BiFeO3 crystals there are 8 possible ferroelectric domains, each with 3 cycloids of different orientations – 24 different configurations in all, making multidomain BiFeO3 a complex material difficult to incorporate in a well-behaved, deterministic magnetic device. 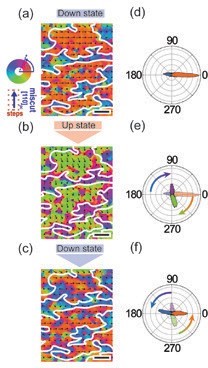 Precisely this new type of magnetoelectric exchange coupling is demonstrated by the XPEEM data (Figs. 1-3). Several improvements to the samples constructed for these experiments were crucial to achieving unambiguous interpretation of the data. Most important is the use of monodomain BiFeO3 films under epitaxial strain: neutron diffraction confirms that each ferroelectric monodomain is correlated to a single antiferromagnetic domain, even after hundreds of ferroelectric switching cycles. Thus monodomain BiFeO3 films eliminate the 24 different polarisation–cycloid configurations mentioned previously for bulk BiFeO3. In the presence of a strong exchange coupling to the ferromagnetic overlayer, the stability of the monodomains ensures (a) one-to-one correlation between the BiFeO3 ferroelectric state and the overlayer spin orientation and (b) deterministic control over the spins orientation of the overlayer.

Ferroelectric switching of the monodomain BiFeO3 between 'up' and 'down' states was accomplished inside the XPEEM by installing the Ferroelectric Tester (Radiant Technologies) in the high–voltage rack of the microscope. Antiferromagnetic properties of the BiFeO3 were monitored by X-ray Magnetic Linear Dichroism (XMLD) on the Fe L2,3 absorption edge (~710 eV) and the magnetic orientation of spins in the ferromagnetic Co overlayer was monitored by X-ray Magnetic Circular Dichroism (XMCD) on the Co L2,3 edge (~770 eV). The instrument setup allowed for the first time in situ reading and writing of the ferroelectric polarisation of a thin film device, while the XPEEM imaged the effect of the ferroelectric switching on the BiFeO3 antiferromagnetic and Co ferromagnetic configuration. The exact knowledge of the ferroelectric, antiferromagnetic and ferromagnetic configuration of the multiferroic device was key to unveiling the physics behind its functionalities. Crucially, the submicron size of the device made possible the deterministic nature of the multiferroic coupling, and only the combination of microscopic (XPEEM) and bulk (neutron diffraction) techniques has made it possible to disentangle the roles played by each one of the three previously mentioned ferroic orders.
The BiFeO3-based devices were switched successfully at room temperature more than 1000 times, a breakthrough result for multiferroic devices. This suggests that the strain enginneering of heterostructures is a promising path for the realisation of practical, new multiferroic devices.

Funding acknowledgement: This work was supported by the Army Research Office through grant W911NF-10-1-0362 and W911NF-13-1-0486. PEEM measurements at Diamond Synchrotron (UK) were performed at the I06 beamline under proposals nt12084, nt13225 and si11589. Part of this work was performed at the Surface/Interface: Microscopy (SIM) beamline of the Swiss Light Source, Paul Scherrer Institut, Switzerland. Work at Argonne National  Laboratory was supported by the US DOE, Office of Science, Office of Basic Energy Sciences, under Contract No. DEAC02-06CH11357. M. V. V. is supported by the U.S. DOE under Award No. DE-FG02-03ER46097. R.D.J. acknowledges STFC for the provision of beam time on the WISH instrument at ISIS, proposal number RB1600019, and P. Manuel for data collection.  R.D.J. acknowledges support from a Royal Society University Research Fellowship. J.Í. acknowledges support from the Luxembourg National Research Fund (Grant number FNR/P12/4853155).
Corresponding authors: Prof Chang-Beom Eom, University of Wisconsin, eom@engr.wisc.edu, Dr W Saenrang, Suranaree University of Technology, Thailand, Prof B A Davidson, CNR-Istituto Officina dei Materiali, Italy & Temple University, USA