Spin-orbit torque (SOT) arises from spin-orbit coupling in heavy metal/ferromagnet bilayers, and can be used to control the magnetisation direction. It is of considerable interest as a way to efficiently switch the magnetisation of spintronic devices, which have advantages over traditional electronic devices, including non-volatile memory and logic applications. In order to engineer materials with enhanced SOT, for lower power consumption, scientists are investigating the microscopic origin of SOT.

A team of researchers based in Korea and the UK used X-ray Absorption Spectroscopy (XAS) and X-ray Magnetic Circular Dichroism (XMCD) measurements on Diamond’s BLADE: X-ray Dichroism and Scattering beamline (I10) to investigate the relationship between the resistivity and the spin-Hall angle of platinum. They found that the SOT strength increases with heavy metal resistivity. Their results are expected to provide an efficient route for material engineering towards improved SOT-based spintronic devices.

The manipulation of the magnetisation by in-plane current utilising spin-orbit torque (SOT) has been receiving a great deal of attention due to its possible applications in spintronic devices such as magnetic memories and spin-logic devices1-3. For wider applications of spintronic devices, it is essential to find an efficient way to switch the magnetisation. In this respect, many attempts are being made in order to improve the SOT efficiency, for instance, by finding heavy metal (HM) electrodes with high spin Hall angle.

In order to efficiently engineer materials with large spin Hall angle, it is important to address the so-far unanswered question concerning the microscopic origin of the SOT.  One of these questions is the relation between the resistivity of the HM layer and the spin Hall angle. In this work, the effect of the resistivity on the spin Hall angle was investigated using Pt(5 nm)/Co(0.8 nm)/AlOx(1.8 nm) structures (Fig. 1a), in which the resistivity of Pt is modulated by varying Ar deposition pressures ranging from 3 to 50 mTorr. The resistivity of the Pt layer shows a gradual increase with Ar pressure and reaches a value of almost 1.6 times larger for Pt deposited under 50 mTorr than that grown under 3 mTorr (Fig. 1b). This is expected because the reduced kinetic energy of sputtered atoms under a higher pressure leads to imperfections in the crystal structure.
Next, the effect of the Pt resistivity on the spin Hall angle and resultant SOT is investigated by measuring SOT-induced effective magnetic fields and the critical current for SOT-induced magnetisation switching. The effective magnetic fields are measured using a harmonic lock-in technique: the measurement of the first and second harmonic Hall voltages with respect to the in-plane magnetic fields, allowing us to extract the effective spin Hall angle (θSH,eff). Figure 1c shows that the θSH,eff increases ~3 times while the resistivity of Pt layer increases by a factor of 1.6. The increase in θSH,eff is confirmed by SOT-induced switching experiments where the magnetisationdirection was monitored by measuring the anomalous Hall resistance (RH) while sweeping a pulsed driving current up to ±25 mA. The results, shown in Figure 1d, demonstrate deterministic SOT-induced switching of perpendicular magnetisation and show a reduction in the switching current Isw for a larger Ar deposition pressure or a larger Pt resistivity. The decrease in switching current, or enhancement in the switching efficiency (Fig. 1e), is in good agreement with the enhancement in θSH,eff obtained by the harmonic lock-in technique. 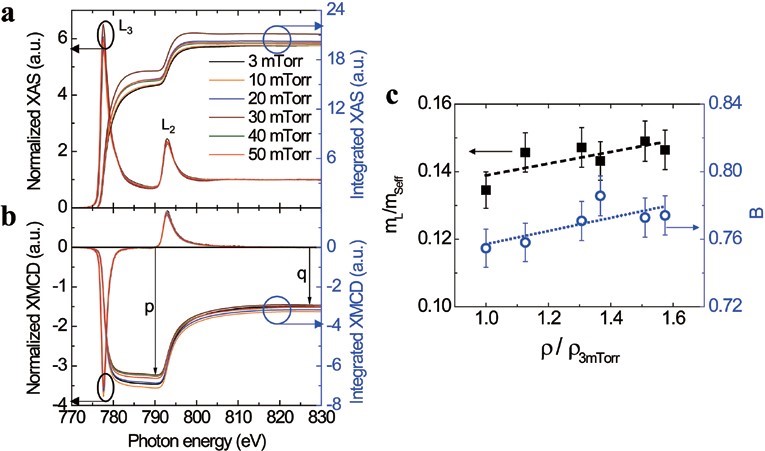 Figure 2: X-ray absorption spectroscopy (XAS) and X-ray magnetic circular dichroism (XMCD) measurements and analysis for samples with Pt layers grown under varying pressure conditions. (a) XAS spectra and their Integrated intensities at the Co L2,3 edge. The branching ratio B is obtained from the latter. (b) Corresponding XMCD spectra and their integrated intensities. The vertical arrows indicate the values of p and q for application in the magneto-optical sum rules. (c) mL/mseff ratio (left axis) and B (right axis) vs. Pt resistivity. Dashed lines are guides to the eye.

It has been experimentally shown that the θSH,eff of Pt increases with the Pt resistivity, however, the enhancement factor of the spin-Hall angle is 3.0 while the enhancement factor of the Pt resistivity is 1.6. This may imply that there is a significant interface contribution to the enhancement in θSH,eff since more current flows near the Co/Pt interface as the Pt resistivity increases. To account for this additional contribution to the SOT, the interface contribution needed to be experimentally addressed, which is related to the spin-orbit coupling-induced band splitting originating from the inversion-symmetry breaking at the interface. X-ray Absorption Spectroscopy (XAS) and X-ray Magnetic Circular Dichroism (XMCD) measurements were performed to verify whether the interface spin-orbit coupling is influenced by the Pt resistivity. Two quantities associated with the spin-orbit coupling of the Co atoms were obtained: the branching ratio (B) and the orbital-to-spin magnetic moment ratio (mL/mS,eff) using the XAS and XMCD spectra and their integrated intensities for Pt(5 nm)/Co(0.8 nm)/AlOx (1.8 nm) samples (Fig. 2a,b). The obtained values of B and mL/mS,eff show a gradual increase with Pt resistivity indicating that the spin-orbit interaction of the Co indeed increases with the resistivity of the Pt layer. These results are in good agreement with the theoretical prediction4 which emphasises the important role of interfacial spin-orbit interaction that contributes to the increase in θSH,eff. Therefore, our result, the efficient control of θSH,eff  and hence of SOT by controlling the HM resistivity, opens up a novel way to improve the switching efficiency in SOT-active devices.