Endoglin (ENG)/CD105 is a mammalian glycoprotein that is found in the membranes of cells that line blood vessels. It is essential for healthy heart development and blood vessel growth, but conversely it is also involved in preeclampsia and can help tumours establish their blood supply. Additionally, ENG gene mutations cause hereditary hemorrhagic telangiectasia type 1 (HHT1), a genetic disorder characterised by complex vascular malformations that affect 1 in 10,000 individuals.
Although ENG plays a crucial role in the vascular system and its inhibition can slow tumour proliferation, no high resolution structural data exist to show how it is organised and how it interacts with its binding partner, bone morphogenetic protein 9 (BMP9).
To gain the much needed structural insights on this protein, several hundred crystals were grown and screened for their diffraction properties. Just one yielded a usable dataset at 4.45 Å resolution using the Macromolecular Crystallography (MX) beamline (I02).
Together with other structures, this showed that the N-terminal orphan region of ENG, which is responsible for its ligand-binding activity, consisted of two duplicated domains. Only the first of these domains recognised BMP9 through a hydrophobic interface. At the other end of the protein, the C-terminal region functioned as a scaffold that optimally positioned the binding site. Overall, ENG cradled BMP9 in such a way to effectively display it to other proteins involved in signalling pathways for blood vessel maintenance.

Figure 1: Structure of ENG OR and its complex with BMP9. (a) OR consists of a duplicated β-helical domain (OR1/OR2) whose cysteines are shown in ball-and-stick representation and coloured magenta. (b) The topology of OR highlights its internal domain duplication. (c) Suggested evolutionary origin of ENG OR by duplication and circular permutation of an ancestral β-helical domain. (d) Crystal structure of homodimeric BMP9 bound by two copies of ENG OR. The encircled region indicates the binding interface, which overlaps with a protein fragment containing the epitope of anti-ENG clinical monoclonal TRC105 (red).

Endoglin (ENG)/CD105 is an essential endothelial cell co-receptor of the transforming growth factor (TGF)-β superfamily. This consists of extracellular type I and II serine/threonine kinase receptors that, upon interaction with structurally related ligands such as TGF-βs and bone morphogenetic proteins (BMPs), regulate fundamental cellular processes by triggering a signal transduction cascade through cytoplasmic SMAD proteins. Mutations of the human ENG gene are linked to hereditary hemorrhagic telangiectasia type 1 (HHT1), an autosomal dominant vascular disorder also known as Osler– Weber–Rendu syndrome; moreover, ENG has been implicated in preeclampsia and - as highlighted by the observation that anti-ENG monoclonals can inhibit tumour angiogenesis - represents a promising target for cancer therapy. Therefore, structural knowledge of human ENG and its complexes constitutes a valuable framework to both understand the molecular basis of BMP-dependent signalling and shed light on its clinical implications.

ENG is a ~180 kDa homodimeric type-I transmembrane protein that consists of an N-terminal orphan region (OR) and a C-terminal zona pellucida module (ZP). Extensive attempts to crystallise the full-length ectodomain of ENG failed, likely because the flexibility of the linker between OR and ZP interferes with crystal packing. Therefore, ENG was divided into two fragments that spanned the ligand-binding OR and the homodimerisation-mediating ZP, respectively. These regions were expressed and crystallised separately using a novel mammalian fusion protein methodology1. Furthermore, OR was crystallised in complex with BMP9, a physiological high-affinity ligand for ENG in endothelial cells. 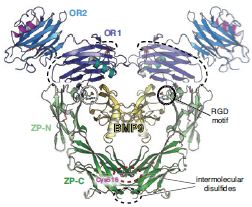 Figure 2: Theoretical model of the full ectodomain of dimeric ENG in complex with BMP9, based on the crystal structures of the individual components and the ENG OR-BMP9 complex.

The structure of OR reveals a monomer consisting of two β-helical-like domains (OR1/OR2) with a common novel fold that also includes an α-helix (Fig. 1a and b). Structure-based sequence alignments show that OR2 is actually inserted after the second β-strand of OR1, suggesting that the OR fold originated by gene duplication and circular permutation (Fig. 1b-c).

To gain mechanistic insights into how ENG modulates BMP signalling by interacting with secreted ligands, the structure of ENG OR in complex with BMP9 was determined. Despite their perfect shape and high reproducibility, the OR-BMP9 crystals diffracted X-rays very poorly, so that efficient screening of hundreds of specimens using the ACTOR sample mounting robot at beamline I02 was essential to obtain a single usable dataset at 4.45 Å resolution. The structure of the complex reveals that the outer tip of the BMP9 β-sheets is recognised by a hydrophobic groove on the OR1 domain of ENG (Fig. 1d). Notably, this binding region involves conserved ENG amino acids Ser278 and Phe282, mutations of which are found in patients suffering from HHT13; on the other hand, the structural data suggests that many other pathological mutations act indirectly, by interfering with proper folding of ENG. Remarkably, the BMP9-binding region of OR1 overlaps with the epitope of TRC105/SN6j (Fig. 1d), a monoclonal antibody against ENG that is being clinically investigated for the treatment of solid tumours together with vascular endothelial growth factor inhibitors4.

How does co-receptor ENG present the BMP9 ligand to other members of the signalling pathway, such as type I receptors activin receptor-like kinase 1 (ALK1)? As mentioned above, the C-terminal half of the ENG ectodomain corresponds to a ZP module. This is a bipartite element that consists of a ZP-N and a ZP-C domain and mediates protein-protein interactions in many other extracellular matrix components with unrelated biological functions. While it contains characteristic ZP-N domain features such as an immunoglobulin-like fold and two conserved disulphides, ENG ZP-N is unique in that it includes an additional disulphide bridging two α-helices and exposes to the solvent a loop carrying an RGD motif associated with cell surface adhesion (Fig. 2). Interestingly, the immunoglobulin-like ZP-C domain is quite different from other ZP-Cs. This is because the absence of an extended cysteine-carrying loop results in a minimal fold that is stabilised by one disulphide rather than the conventional three or four, leaving a single cysteine residue unpaired.

ENG lacks a conserved ZP-N tyrosine that is implicated in ZP module-mediated polymerisation, as well as a consensus cleavage site in ZP-C whose processing is also associated with extracellular assembly; together with a short interdomain linker and an occluded ZP-N homodimerisation interface, these features explain why ENG is a non-polymerising ZP-module-containing protein2. Consistent with mutagenesis studies, the structure shows that solvent exposure of unpaired Cys516 within a membrane-proximal ZP-C loop allows it to covalently cross-link two molecules of ENG by forming an intermolecular disulphide with another copy of itself. Furthermore, it suggests that Cys582 - an additional cysteine not present in the ENG ZP expression construct - would be located in the vicinity of Cys516, where it could form a second intermolecular disulphide. These observations result in a model wherein two disulphide-bonded copies of the ENG ZP module would position the respective OR regions so that, together, they can embrace a BMP9 homodimer (Fig. 2).

The abundance of ENG, together with its nanomolar affinity for BMP9 and avidity-conferring antibody-like structure, allows the co-receptor to efficiently capture its ligand and retain it on the surface of endothelial cells. However, in order for the signalling cascade to initiate, ENG must deliver its cargo to the type I and type II receptors. Notably, the ENG-BMP9 interface is compatible with BMP9 recognition by ALK15, resulting in a model of the ternary ENG-BMP9- ALK1 complex (Fig. 3). However, the same interface overlaps with the BMP9 binding site for type II receptor activin receptor type-2B (ActR2B)5, suggesting that signalling requires handing over of the ALK1-BMP9 complex from ENG to ActR2B (or alternatively bone morphogenic protein receptor type II (BMPRII), another type II receptor). Collectively, these observations bring detailed insights into the mechanism of BMP signalling and inform ongoing efforts to therapeutically target this essential cellular pathway. 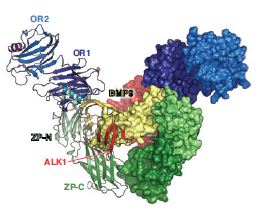