The 18650 cylinder is the most widely used lithium ion (Li-ion) cell geometry, powering everything from laptops to electric vehicles. Its capacity has been steadily increasing, and now more than ever, the safety of Li-ion batteries is of the utmost importance. Cell failure is extremely rare during normal operation, but under abusive conditions the active materials within Li-ion batteries break down exothermically, generating large amounts of heat that can lead to a positive feedback loop, fire and even explosions – a phenomenon known as thermal runaway.

Rupture of 18650 cells during thermal runaway is one of the most hazardous types of failure, and yet the stages leading to rupture are not well understood. Researchers are investigating the cause of rupture to further our understanding of failure mechanisms and to guide the development of safe next-generation Li-ion cells. To capture the dynamic sequence of events with enough detail, they need to use Diamond’s high-speed X-ray imaging capabilities. The I12 JEEP beamline offers a large field of view for high speed and high energy imaging of Li-ion battery failures. Their results show that the introduction of a bottom vent on commercial cells can help reduce the risk of rupture and improve the safety of the cell. 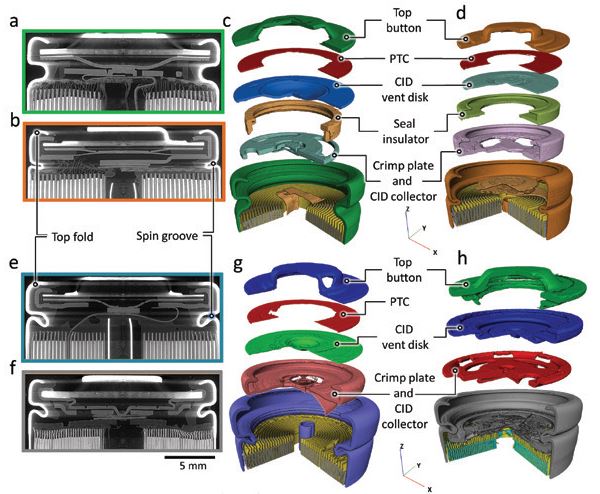 High-energy density lithium ion batteries are used for a wide range of applications, from portable electronics and medical devices to aerospace and manned spaceflight. Maintaining a high standard of safety for lithium ion cells is more important now than ever before particularly since high-energy density cells are expected to operate under challenging conditions for applications that are often ‘mission critical’. For example, when a battery pack for the auxiliary power unit caught fire on a Boeing Dreamliner in 2014, the entire fleet of aircraft was grounded for several months due to passenger safety concerns1.

Catastrophic failure of lithium ion batteries stems from the occurrence of ‘thermal runaway’ where, at a critical temperature, a series of exothermic reactions cascade throughout the cell. This process generates a lot of heat and produces large amount of product gas, both of which present significant safety challenges to mitigate hazards. For example, the rapid generation of heat and gas inside an 18650 cell can lead to violent ruptures and fires. One of the most violent failure mechanisms occurs when the pressure inside cylindrical 18650 cells reaches a critical point where the cell bursts and generates projectiles from its ejecting contents. The ejected contents consist of hot, electrically conducting, reacting material that can lead to propagation of thermal runaway to neighbouring cells via heat dissipation or short circuiting elsewhere. Identifying the cause of rupture is crucial for manufacturers to carry out an informed approach to engineering safer cell designs. However, in a previous study2, bursting was shown to occur in less than 0.01 s, which along with the events occurring inside a steel casing, makes the dynamic occurrences particularly challenging to capture and characterise. 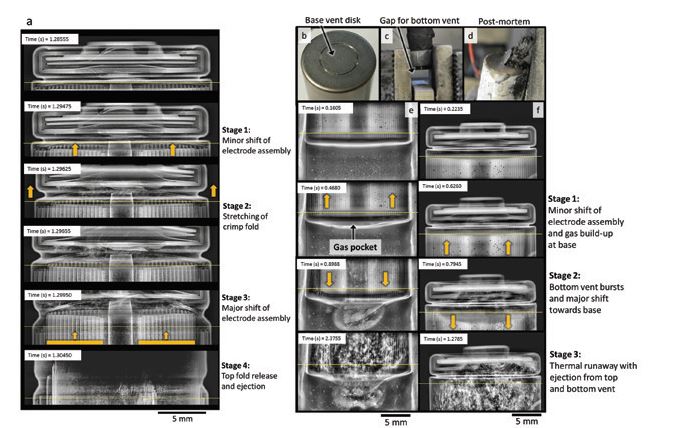 High energy and high flux synchrotron X-ray sources such as Diamond Light Source hold the exceptional capability of carrying out high-speed and high-resolution X-ray imaging with a high energy beam3. Even the most rapid failure mechanisms of lithium ion batteries can be captured in detail and the interaction between the mechanical design of commercial cells and the rapid internal structural dynamics during thermal runaway can be examined. In this study4, high speed X-ray imaging at up to 4000 frames per second (fps) was used to elucidate the stages that lead to violent rupture of 18650 cells. The failure mechanisms of different commercial cell designs (Fig. 1) were characterised and compared with respect to safety and merits associated with their respective designs. Failure mechanisms were characterised into four different types: controlled ejection, cell bursting, top button puncture and escape of internal mandrel. The unprecedented spatial and temporal resolution achieved at I12 allowed the distinct stages that lead to each type of failure to be classified (Fig. 2). For example, across all cell designs, three consistent steps preceded violent rupture and ejection of cell contents. First, the spin-groove extended (see labelling of components in Figure 1), followed by the electrode assembly shifting and clogging the vent, and finally, the top-fold straightened out and released the header components leading to ejection of the entire electrode assembly.
The shift of the electrode assembly towards the vent that led to clogging, is thought to have resulted from an insufficient gas flow being able to pass through the core of the assembly from the base of the cell. This led to the electrode assembly shifting in the direction of the escape path towards the vent, hindering the flow of escaping gas, and leading to a rapid pressure rise within the casing of the cell. A practical application of this result was then explored by introducing a second vent on the base plate of an 18650 cell. The simultaneous relief of pressure from the top and bottom of the cell was shown to drastically reduce the risk of violent rupture and ejection, most notably by improving the relief of generated gas and avoiding the shift of the electrode assembly that previously caused clogging.
The insights achieved in this work indicate that to achieve a high standard of safety for next generation lithium ion batteries, cell designs must evolve alongside their increasing energy density and propensity to catastrophically fail. This study presented the first example of high-speed X-ray imaging being used to link internal structural dynamics to external risks posed during thermal runaway, and demonstrates the potential of this diagnostic approach to be combined with other metrics of risk such as heat generation, gas generation, and internal temperature measurements.

Funding acknowledgement: The authors would like to acknowledge funding from the EPSRC (EP/ N032888/1 and EP/M009394/1), the Royal Academy of Engineering, the STFC (ST/N002385/1), and the UK National Measurement System. These experiments were performed between beamlines ID19 at the ESRF (Grenoble, France) and I12 at Diamond Light Source (Harwell, UK). Finally, the authors would like to acknowledge the help and support from the NASA Johnson Space Center.
Corresponding author: Dr Donal Finegan, National Renewable Energy Laboratory, USA, donal.finegan@nrel.gov