Knowing how fluids move through micron-sized voids (or ‘pores’) in rock kilometres below the Earth’s surface is crucial information to help understand and optimise underground carbon dioxide (CO2) sequestration, oil recovery from reservoir rocks, and a host of other processes. Oil and gas can be trapped in pores as water flows through the rock, with strong trapping beneficial for CO2 storage and weak trapping preferable for efficient oil recovery. However, the exact nature of trapping at the pore scale is not well-understood, with inhibiting viscous and driving capillary forces both thought to play an important role in controlling flow during trapping events.
To illuminate this process, an innovative flow apparatus was engineered to replicate the high pressures and temperatures seen in reservoirs. With the Diamond Manchester Imaging Branchline (I13-2) within the X-ray Imaging and Coherence beamline (I13) at Diamond Light Source, fluid flow was imaged in 3D, at the micron scale, and with a time resolution of around a minute. I13-2 offers photon flux over a million times higher than that of a laboratory X-ray source, perfect for studying rapid dynamic processes like fluid displacement. As a result, the time-resolved imaging provided pore-by-pore analysis of the local capillary pressure during trapping events. Results reveal that water pushes oil into pore spaces in approximately 10 minutes – orders of magnitude slower than the opposite process when oil pushes out water from the pore space. After trapping, the oil rearranges in the pore space to find a new position of minimum energy and the local capillary pressure increases rapidly. These new insights provide useful information to build novel models predicting how these fluids flow and how much oil or gas is trapped.

Multiphase fluid flow in permeable media is a complex pore-scale phenomenon, which has many applications in natural and industrial processes, such as water infiltration in soils, oil recovery from reservoir rocks, geo-sequestration of supercritical CO2 to address global warming, and subsurface non-aqueous phase liquid contaminant transport. At the pore scale, the two most important processes that compete during the displacement of a non-wetting (hydrophobic) fluid by a wetting (hydrophilic) fluid are pore-filling or piston-like displacement and snap-off; this latter process can lead to trapping of the non-wetting phase1. The trapping of the non-wetting phase is important: for CO2 storage, a maximum trapping efficiency is desired whereas for oil recovery, less trapping is preferable for efficient production. Although, there are several studies reported on two-dimensional visualisation of fluid displacement and trapping, the dynamics of imbibition processes (displacement of a non-wetting fluid by a wetting fluid) leading to snap-off have not been investigated in such details in realistic three-dimensional geometry. The time-dependent information is important to validate models of pore-scale displacement and to quantify how the balance of viscous and capillary forces controls the exact nature of trapping.

We conducted dynamic flow experiments in a 3.8 mm diameter and 10 mm long Ketton limestone sample. The sample was first saturated with the brine. The system was pressurised to 10 MPa, followed by injection of oil (a drainage process for water-wet porous media) from the top of the sample by establishing a pressure gradient of 50 kPa. The sample was imaged in three dimensions continuously during drainage using a pink beam (with photon energies up to 30 keV) at beamline I13-2. We used a voxel size of 3.28 μm and a time-step of 38 s between each three-dimensional data collection. After the completion of the drainage process (identified when there was no longer any visible change in fluid saturations), the flow was reversed by injecting brine (imbibition process) from the base of the sample at a pressure gradient of 22 kPa. The sample was imaged continuously during imbibition.

Figure 1 shows the oil phase at various time steps during drainage (Fig. 1a-d) and imbibition (Fig. 1e-h). The residual oil at the end of imbibition contains a number of disconnected oil ganglia (trapped phase), represented by different colours (Fig. 1h). A complete three-dimensional image sequence of drainage and imbibition processes is shown in videos (Video 1 and 2)6. 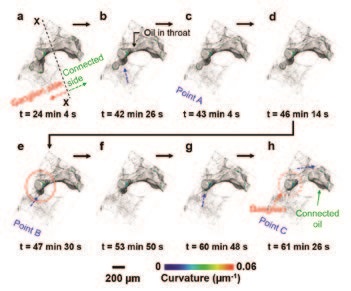 Figure 2: Snap-off during imbibition in a throat between two adjacent pores. Various times during brine injection showing oil progression and trapping in a water-wet Ketton rock sample. The rock and brine are shown semi-transparent and transparent respectively for effective visualisation. The dashed blue arrows indicate the approximate direction of interface migration. Points a-c show the events marked in Fig. 3. Time t = 0 denotes the start of the imbibition process (after acquiring the first tomographic image in imbibition). Time (t) represents the end of each tomographic image acquisition. (Singh et al.5)

In this study, our aim was to obtain a complete understanding of various pore-scale displacement and snap-off events that result in trapping of the non-wetting phase in the pore space. Figure 2 shows snapshots of one of the pore-filling and trapping events during imbibition. The complete three-dimensional sequence of the oil displacement process is shown in the video (Video 3)6. During brine injection, the brine-oil interface moves from pore to pore in a piston-like displacement without oil trapping, until it reaches the pore space marked by the red circle (Fig. 2e). Here, the brine (not shown for effective visualisation) in the adjacent oil-filled throats starts to swell. The brine layers in the throat corners continue to grow until the brine-oil interface is no longer stable, resulting in snap-off of the interface and trapping of the oil.

To explain the snap-off process quantitatively, we analyse the local capillary pressure (calculated from the Young-Laplace equation, Pc=σκ, where Pc is the capillary pressure, σ is the interfacial tension between oil and brine, and κ is the total curvature estimated from an analysis of the segmented image) as a function of time and injected brine volume during the pore-filling and snap-off events observed in Figure 2. The relationship of capillary pressure, time and normalised oil volume is shown in Figure 3. Here, the ganglion and connected side represent the values measured on the left and right side of the X-X section respectively (shown in Fig. 2a). The X-X section was selected in the throat where the snap-off occurred (Fig. 2h). From Figure 3a, we observe that the capillary pressure on both sides decreases approximately linearly with injected brine volume and time. The brine-oil interface migrates from left to right without any trapping (representing pore-filling events). At point A (Fig. 3b), we observe a rapid decrease in the oil volume in the subset near the throat (open symbols in Fig. 3b corresponding to the red box in the inset picture). This is linked to the capillary pressure gradient, caused by a sudden decrease in the local capillary pressure in the ganglion side (Fig. 3a), which drives the brine flow towards the throat. Then just after 46 minutes, we observe a pore-filling event that occurs between points A and B where the capillary pressure remains approximately constant (Fig. 3c) while locally the oil saturation decreases rapidly (Fig. 3b). This type of pore-filling behaviour, however, has not been seen or hypothesised hitherto: in drainage instead we see rapid changes in capillary pressure at a constant saturation2. 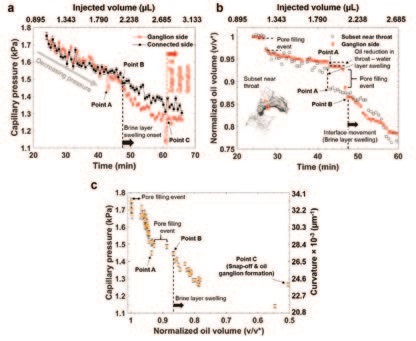 Beyond point B (Fig. 3), there is an apparent disparity in capillary pressure across the system, which drives brine in layers to flow from the ganglion to the connected side. This represents a swelling of wetting layers in the throat, as can be seen by an incremental reduction in oil volume in the throat subset in Figure 3b (open symbols). Eventually at point C (Fig. 3a, 3c), we see snap-off, resulting in the trapping of oil ganglion in the pore body. When this happens, there is a rapid rise in capillary pressure as the ganglion rearranges to find a lower energy configuration. The remarkable feature of this analysis is that the swelling of wetting layers proceeds over approximately 14 minutes. This is many orders of magnitude slower than the sub-millisecond filling observed during a Haines jump in drainage3,4. We have investigated three different snap-off events for different pore topologies and fluid configurations, which are reported in Singh et al.5. The time-scale for brine layer swelling in all the studied events are of the order of tens of minutes, followed by instantaneous snap-off processes. After snap-off the local pore-scale capillary pressure rises as the ganglion rearranges to find a lower energy configuration.

In conclusion, the time-resolved X-ray micro-tomography provides new insights into pore-scale fluid displacement in three-dimensional porous media. This has led us to investigate the pore-filling and snap-off events that lead to the trapping of the non-wetting phase. These findings have important implications in many fields such as oil recovery, CO2 sequestration and remediation of oil contaminated sites.