Malaria is a highly infectious disease that is widespread in tropical and sub-tropical regions of the world. It is caused by a group of parasitic single-celled microorganisms, which are carried by mosquitoes. When malaria parasites enter a human via a mosquito bite, they rapidly multiply in red blood cells within a protective casing known as the parasitophorous vacuole. Once the newly made parasites mature they have to break through this vacuole as well as the membrane of the red blood cell in order to infect other red blood cells.

The exact mechanisms underpinning these crucial, clinical stages of malaria infection were unclear, so 3D images of infected cells were obtained using X-ray tomography at B24 at Diamond. Using special additives to arrest the breakage of the parasites’ double enclosures at different steps, the process was explored in detail and compared with live cell video microscopy. 3D electron tomography was also employed to scour tiny slices of the infected cells to examine their structural details.

The work revealed that rather than the parasites causing a gradual breakdown of the red blood cell membrane, the process happened far more abruptly. At a very late stage, the infected host cell underwent a dramatic shape change and then broke to liberate the parasites. Furthermore, the study showed that the membrane of the vacuole became permeable just prior to its breakage. These new insights could help to develop novel antimalarial therapies that target this critical process.

Malaria parasites have a complex life cycle with very distinct stages in their mosquito and mammalian host tissues, but the clinical symptoms all arise from cycles of infection in the blood stage. Once a parasite enters a red blood cell, it wraps itself in a piece of membrane originally derived from the host cell, and then, hidden away from immune detection, proceeds to divide into up to 32 daughter cells. During this process, the parasites take control of the red blood cell and insert all the machinery they need to proliferate and to protect the infected cell from detection and attack by the host immune system. Comfortably installed, they proceed to consume the cell’s haemoglobin, fuelling their growth. Once the parasite progeny are mature, they release signals to begin the process of egress, by which they will successively break their surrounding membrane and then the outer membrane of the red blood cell, with its cytoskeleton support layer, culminating in their explosive release into the bloodstream where they quickly find new red blood cells to infect and restart the cycle. For the major human parasite species, Plasmodium falciparum, this cycle takes around 2 days, and results in the cyclical fever and chills typical of the disease.

Figure 1: Schematic diagram of the main steps in egress, with points of arrest by compound 1/2 and E64 indicated.

Egress takes place through a highly orchestrated sequence of events triggered by secretion of proteases or other factors from the parasites into their vacuole, leading to a further cascade of protease activation1,2. Two chemical blockers have been discovered that arrest egress at different points: The first block (compound 1 or the closely related compound 2) prevents the parasites from breaking out of their vacuole by blocking secretion of the protease Sub1, so that the infected cell remains full of mature parasites packed tightly inside their own compartment, with the blood cell retaining a rigid but distorted shape. The second block (the cysteine protease inhibitor E64) arrests egress just before the final escape of the parasites, trapping them inside the remnants of the red blood cell, which has lost its mechanical integrity but still loosely retains the parasites inside a floppy bag-like cell (Fig. 1). 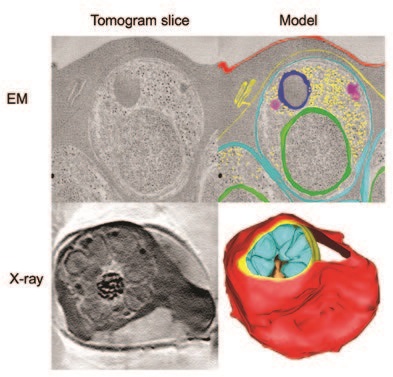 In this study3, three-dimensional (3D) reconstructions of these two arrested states were obtained by both electron and X-ray tomography. The electron microscopy (EM) images revealed an initial, previously unknown, step in which the vacuole membrane becomes leaky and allows mixing of the cell contents with those of the vacuole. To track the changes in composition of the vacuole and red cell compartments, we used electron energy loss spectroscopy, which confirmed that the two compartments were initially distinct in composition but then became equalised.

The EM and electron spectroscopy observations were made on the very thin sections needed for transmission EM imaging, so that it was not possible to determine whether the leak arose from tiny holes distributed over the membrane or from a localised broken region that was not captured in the thin sections. A unique feature of soft X-ray beamlines like Diamond’s B24 is that they enable 3D imaging of structures as thick as a whole cell in the native, frozenhydrated state. The B24 images provided an overview of the cells, allowing us to search for localised regions of breakage. However, the data suggested that vacuole membrane did not have any large lesions and that the leakage arises from pores that are too small to detect even by electron tomography. The X-ray overview also revealed the overall shape of the cells, which retain their original biconcave disk shape, albeit distorted by a huge bulge to accommodate the parasite-containing vacuole (Fig. 2). The cytoskeleton underlying the blood cell membrane confers its rigidity. 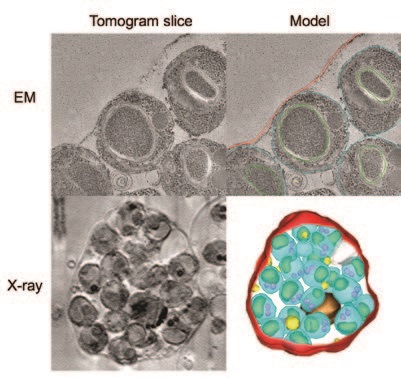 Figure 3: Electron and X-ray tomograms of cells arrested late in egress by E64. Colour code as
in Figure 2.

In contrast, EM of the late stage arrested cells showed the parasites loosely enclosed in the remnants of the blood cell, with whorls of membrane left behind by the broken vacuole (Fig. 3). The X-ray view showed how the late stage cells had collapsed and lost their rigidity, likely due to some proteolytic degradation or disassembly of the cytoskeletal network in the later part of the cascade.

We used time lapse video microscopy of live cells and a modified form of the parasites expressing a fluorescent protein in the vacuole, in order to track membrane leakage. The resulting movies, along with a body of previous studies in the literature, show that the egress process is a programme of intense cellular activity punctuated by visible, dramatic changes in cell shape, lasting about 30 minutes from the first detectable step (vacuole membrane permeabilisation) to parasite exit. 10-20 minute pauses between visible steps likely reflect intracellular processes on the subnanometer scale that are not visible by cellular imaging. This sequence of steps is diagrammed in Figure 1.

This study illustrates the power of multiscale imaging with a range of microscopy techniques from optical to X-ray to electron, including fluorescence and spectroscopy, to reveal events on the cellular and subcellular scales. These approaches can be extended to the molecular level if cryo-electron tomography can be applied to slices of vitrified cells produced by the emerging technique of focussed ion beam milling. However, robust procedures for identification and tracking of the region of interest through the various imaging and milling steps are not yet established. This workflow will make it possible to computationally extract large macromolecular complexes from cryo tomograms and combine them to get detailed views of the cellular machinery in situ.