As Phase III comes to an end, the Optics and Metrology Group continue to provide expert support in the design, testing, and optimisation of X-ray optics for new and upgraded beamlines. Looking to the future, the Optics and Metrology Group is also heavily involved in planning for Diamond-II. Ray-tracing and wavefront propagation simulations are being used to predict the likely performance of current beamlines, and how they might be upgraded to optimally use the proposed brighter X-ray source. 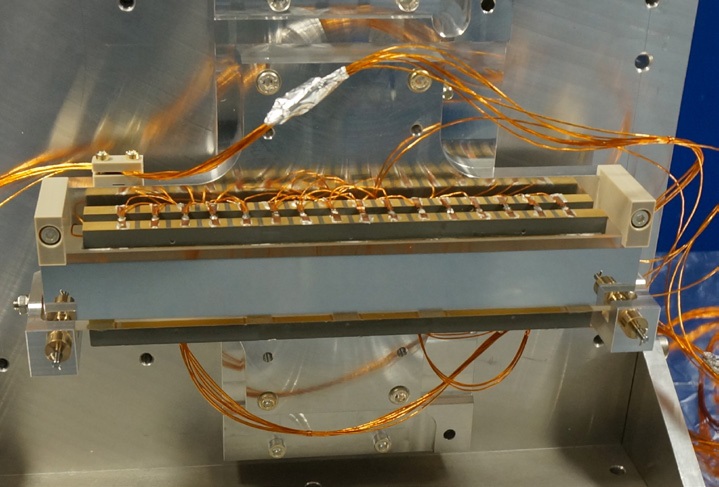 Ultra-high accuracy characterisation of state-of-the-art X-ray optics continues to be an essential procedure, both for quality control and the development of novel optics. Continuous improvement of metrology instrumentation and techniques has led to ever more accurate at-wavelength (using X-rays) and ex situ (using visible light) characterisation of X-ray optics. We have also increased the technical capabilities of many existing and future beamlines by pursuing a broad range of optical research projects1-6.

With our strong reputation for optical metrology expertise, we have also begun offering a paid commercial service to manufacturers to characterise and optimise beamline optical systems of other synchrotrons. Diamond’s enhanced metrology capabilities provide manufactures with a two-fold advantage: helping to improve the quality of their products, and to provide an independent verification of high quality.

Figure 2: (a) Improved curvature drift of a 'speedy' bimorph mirror compared to a traditional model; (b) Further stability improvement to the size of the X-ray beam using creep compensation for the speedy bimorph.

Piezo-electric, deformable 'bimorph' mirrors are used to focus X-rays on many beamlines at Diamond and at other facilities around the world. The tangential curvature of bimorph mirrors is typically only changed every few hours or days. This operation can take tens of minutes and often requires expert guidance. Following a large change in curvature, bimorph mirrors are known to take more than 15 minutes to stabilise on the nanometre scale. Historically, the dynamic performance of active X-ray optics has therefore not been exploited at synchrotrons. This is in stark contrast to ultra-fast adjustments made to adaptive optics in other scientific fields such as Astronomy. However, many synchrotron beamlines, especially those dedicated to macromolecular crystallography, now analyse hundreds of samples per day. Such beamlines would greatly benefit from the ability to rapidly modify the X-ray beam profile in only a few seconds to match to the size of small samples, or to vary the illuminated region of larger samples. The time-dependent behaviour of a series of micro-focus, bimorph mirrors was investigated using Fizeau interferometry in the Optical Metrology Lab. A novel 'speedy' bimorph (Fig. 1)was developed by making several hardware and software improvements.Utilising a new high-voltage power supply, the magnitude of the mirror’scurvature drift after applying a large voltage shift to the piezo actuators was significantly reduced (Fig. 2a). The residual drift, attributed to piezo creep, was shown to be repeatable and could readily be compensated. Once installed on the Microfocus Macromolecular Crystallography beamline (I24) at Diamond,the Kirkpatrick-Baez (KB) pair of bimorphs focused the X-ray beam in less than 9310 seconds. Of equal importance, compensating piezo creep ensured that the size of the X-ray beam remained stable for more than one hour after making a major change (Fig. 2b). This enables continuous 'adaptive' shaping of the X-ray beam in almost real time. Such innovations could lead to significant scientific improvements in how active X-ray optics are utilised at synchrotron and free-electron laser (FEL) sources.

A portable device for in situ characterisation of X-ray mirrors 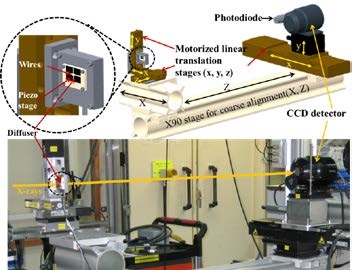 Figure 3: (Top) Schematic of the portable device for in situ characterisation of X-ray optics. The diffuser, wires, CCD detector, and photo-diode can be translated into the X-ray beam using motorized linear stages. (Bottom) Photograph of the portable metrology device installed on the B16 beamline to characterise X-ray mirrors.

The push towards imaging samples with higher spatial resolution requires diffraction-limited and coherence-preserved X-ray beams. This demands accurate metrology of X-ray mirrors, ideally under working conditions. The Optics and Metrology Group have developed a portable device for in situ characterisation and optimisation of X-ray mirrors using a X-ray speckle-based technique. A schematic of the mechanical layout and a photograph of the device are shown in Figure 3. The entire setup has been purposefully designed for ease of portability. The diffuser is mounted on a piezo stage for precision scanning, and a pair of crossed gold wires is also attached to the piezo stage to permit measurement of the X-ray beam-size. Further downstream, a CCD detector and a photodiode detector are used to record the speckle pattern and perform knife edge scans. The device is capable of measuring either horizontal or vertical reflection X-ray mirrors, which is especially useful if there is a need to characterise composite optics, such as Kirkpatrick-Baez (KB) mirror systems. Trial experiments were conducted at the Test beamline (B16) and Hard X-ray Nanoprobe beamline (I14). Ultra-high angular sensitivity is achieved by scanning the speckle generator in the X-ray beam. In addition to the compact setup and ease of implementation, a user-friendly graphical user interface has been developed to ensure that characterisation and alignment of X-ray mirrors is simple and fast. This fast, compact and accurate X-ray speckle-based device can be easily implemented on a variety of beamlines and is expected to find wide application for in situ characterisation or optimisation of X-ray mirrors at Diamond and other synchrotron radiation facilities.