The Optics and Metrology group plays a vital role in designing, procuring, building, testing, installing and commissioning X-ray optics at Diamond’s beamlines. In synergy with the B16 Test beamline, the group also undertakes targeted research to develop novel optics, instrumentation, and techniques1-10. This helps Diamond’s beamlines to deliver X-ray beams of exceptional quality, enabling world class science to be performed.

Prior to beamline installation, virtually all X-ray optics for Diamond beamlines are assembled and optimised in their beamline mechanics using feedback from Diamond’s metrology instruments. During the past year, more than 70 beamline optics were built and tested in the Metrology cleanroom, compared to the former record of ~50 during the previous year. To keep pace with advances in the fabrication of X-ray mirrors, we continue to improve our metrology capabilities, culminating in our successful measurement of a strongly curved, nano-focusing X-ray mirror with a slope error < 50 nrad rms. In conjunction with improved optics, many beamlines have also benefited from precision metrology to investigate, and often improve, the performance of micro- and nano-motion stages used to translate and rotate important beamline components including optics and samples. A number of “at-wavelength” X-ray techniques have been developed at Diamond. The near-field X-ray speckle technique established on B16 over the last few years was improved4,5 and extended to measure the coherence properties of X-ray beams6 and for imaging, including tomography, of complex biological and material science samples1,2. 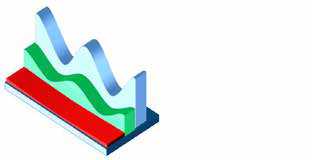 Figure 1: Schematic of the novel multi-lane mirror. Aside from an elliptical focussing profile, each lane also has an extra “wavy” profile which creates an X-ray beam with a constant intensity “top-hat” profile of specified width.

Grazing incidence X-ray mirrors are used on most synchrotron beamlines to focus, collimate, or suppress harmonics. Increasingly, beamline users are demanding variable sized X-ray beams with a cross-section matched to the size of their sample. In response, we have developed a new concept for rapidly varying the size and shape of the focused X-ray beam7. The surface of an elliptically figured mirror is divided into a number of laterally separated lanes (Fig. 1). Each lane is given an additional height profile designed to shape the X-ray beam to a constant intensity “top-hat” profile of specific width. Two prototype mirrors have been fabricated; each with three lanes, to provide focused X-ray beam sizes of 0.5, 2, or 10 μm. X-ray tests on the B16 Test beamline confirmed that the lanes produced the required sizes of X-ray beams (Fig. 2). Using the same deterministic polishing technology, the number of lanes could easily be increased to provide more choice of discrete beam sizes. Measurements also showed that the beam size can be rapidly and reproducibly switched in a few seconds by simply translating the mirror 10 mm sideways without realignment of other optical components. With faster mechanics, it is feasible to reduce the switching time to less than one second. We envisage that such mirrors could be of great benefit to many synchrotron beamlines.

Nano-focusing is increasingly desired on several beamlines. A necessary condition to achieve diffraction-limited focusing is the absence of optical aberrations. X-ray focusing lenses are typically composed of a large number of refractive surfaces. By applying Fermat’s principle, it is found that aberrationfree, refractive surfaces can only be elliptical, hyperbolic, or Cartesian ovals. Since a large aperture is the main requirement for an effective nano-focusing lens, we have developed a novel array of conical surfaces for focusing the X-ray beam to its ultimate diffraction limited size with zero-aberrations8. The remaining challenges in nano-focusing lens design are: maximisation of acceptance aperture; minimisation of absorption; and ensuring the overall lens length stays below the focal length. Compound lens designs, based on Kinoform geometry, with a focal length f = 21 mm, are shown in Fig. 3. Such lenses can focus hard X-ray beams to 20-50 nm full width at half maximum (FWHM). Progress in the fabrication of short focal lenses is currently hampered by the unavailability of sufficiently precise lithography and micro-fabrication methods for the materials of choice (e.g. single crystal diamond). The proposed designs could potentially achieve shorter focal length lenses which would approach a 10 nm focal spot.

Figure 2: Focussed X-ray beam profiles from each lane of a three-lane mirror, as measured on B16 at 15 keV. The design and measured full width at half maximum (FWHM) sizes of the X-ray beam are in good agreement. 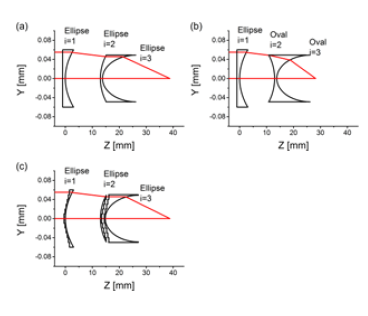 Figure 3: Representation of aberration-free X-ray lenses, as proposed in Reference 8, showing the principal rays: (a) elliptical surfaces for alternating focusing and collimation; (b) ellipses and Descartes ovals for focusing to smaller and smaller focal lengths; (c) kinoform design in which phase is preserved across kinoform steps, by parallelism with incident and refracted beam.

Many important beamline components, including samples, monochromators, and X-ray mirrors, rely on motorised rotational stages. However, ultra-small rotations in the micro- and nano-radian regime (1 nanoradian is equal to 57 billionths of a degree!) are at, or even beyond, the limit of what can be reliably measured by off-the-shelf metrology instruments. Therefore, it’s vitally important to accurately generate known angles to calibrate metrology instruments, which in turn can characterise beamline components. The scientific application with the most demanding requirement for calibrated ultra-small angles is perhaps surface profilometry of synchrotron mirrors. A typical nano-focussing X-ray mirror with a curvature of 50 m has a change in slope of 4000 μrad over its length of 200 mm. Measuring deviations of only a few nanoradians within a total angle change of several million nanoradians requires an accurately calibrated metrology instrument with exceptionally low noise levels and ultra-high resolution. To further improve the capabilities of the Diamond-NOM, and enable next generation nano-focusing optics to be accurately measured, we have designed and built the Diamond-NANGO (nanoangle generator)9. This novel, piezo-driven, flexure device is capable of reliably generating 1 nanoradian steps (Fig. 4) over a range of 7000 μrad. Closed-loop operation of a PiezoWalk actuator, using high-speed feedback from an angle encoder, ensures that the Diamond-NANGO’s output drifts by only ∼0.3 nrad rms over ∼30 min. Such stability, coupled with 1 nanoradian resolution and an extended range, make it an ideal tool for calibrating a variety of angle measuring devices, including the Diamond-NOM. Autocollimators and angle interferometers have independently verified the Diamond-NANGO’s ground breaking performance. 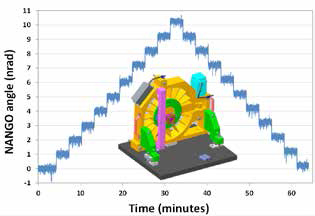 Figure 4: Schematic of the nano-angle generator (Diamond-NANGO) designed and built at Diamond, showing the ~300mm diameter cartwheel flexure (yellow), angle encoder (green disc), linear piezo actuator (cyan), and reflector cube (magenta) mounted at the centre of rotation. The graph shows that the Diamond-NANGO can reliably generate unprecedented angular steps of one nanoradian. This device will play a vital role in calibrating Diamond’s metrology instruments, which in turn will help to improve the performance of beamline components.