In 2015/16, our 9th year of operations, a total of 210 days (5,040 hours) were scheduled for beamline operations, 205 days of User Mode, and five beamline start-up days. The majority of the beam delivery was in standard multibunch mode (900 bunch train) or “hybrid” mode (686 bunch train + a single bunch) with total current of 300 mA. In addition there were several periods of “Special Beam Conditions”, two days in July, five days in August, two days in October 2015 and two days in March 2016 of “low-alpha” mode, to produce short bunches (3.5 ps rms), as well as four days in December of 156 bunch mode, with 135 mA total current. Operation with all filling patterns was carried out in top-up mode. 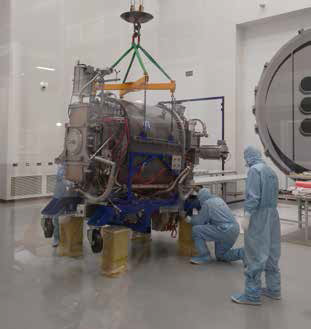 The annual operating statistics are shown in Fig. 1. The Mean Time Between Failures (MTBF) for the year was 119.4 hours, significantly better than all previous years by almost a factor of two. Fig. 1. shows the MTBF separately for the RF system and all other non-RF trips and it can be seen that the improvement has been obtained by reducing both kinds of trips. The overall uptime (beam delivered as a percentage of scheduled hours, excluding low-alpha operation) has however remained the same as last year, 97.6%. This was mainly the result of two long outages, one due to the failure of the RF window of one of the superconducting cavities in July 2015 and the other due to the failure of the injection septum magnet in November 2015, each of which resulted in a loss of 30 hours of scheduled beamtime. Excluding these two events the uptime would have been a record 98.9%. 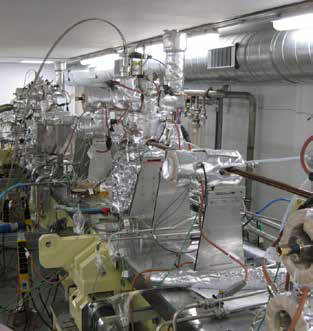 Figure 3: Trial bake-out of the vacuum vessel string on one of the new DDBA girders.

Scheduled shutdowns in 2014/15 continued to be very busy. Front-ends were completed for beamlines I21 and B07, and an in vacuum undulator was installed for I14. In addition to swapping out the failed superconducting RF cavity and septum magnet, a major activity has also been in preparation for the DDBA installation (see below). The RF cavity whose window failed in July 2015 has now been repaired without having to send it back to the supplier, by use of a new clean room kindly made available to Diamond by RAL Space (Fig. 2). Meanwhile, the cavity which failed in September 2014 with a leak from the helium volume to the UHV has now been returned from repair and will soon be tested and conditioned in our RF Test Facility.

The DDBA project, described in previous years’ Annual Reviews, will see a complete DBA (double bend achromat) cell of the storage ring replaced with a new DDBA structure, which will convert what would otherwise be a standard bending magnet beamline into a much more powerful insertion device beamline (in this case for VMXm), with a full length in vacuum insertion device as its source. The project has progressed considerably in the last year. Most components required to equip the two new girders have now been delivered and the girders are under assembly in a newly refurbished air-conditioned area. 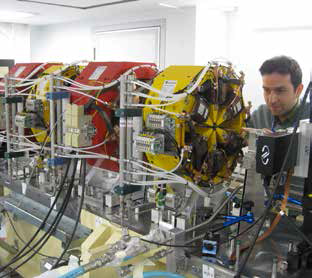 In recent weeks the vacuum vessel string has been successfully assembled on the first girder and a trial bake-out carried out (Fig. 3). After removing the vessels, the multipole magnets (quadrupoles and sextupoles) were then installed and were aligned magnetically using a stretched wire system (Fig. 4). The next steps will be to remove the tops of the magnets, re-install the vessels, bake-out the vessel string, replace the tops of the magnets, install the dipole magnets and complete the on-girder cabling. A similar sequence will be carried out in parallel on the second girder.

Unfortunately, as a result of delays in the manufacture of the magnets and vessels due to a number of technical difficulties, the shutdown for the installation of the DDBA cell has had to be postponed by two months and so will now take place between October 7th and December 5th 2016.

Limiting the shutdown for DDBA installation to a minimum of eight weeks has required an extensive programme of cabling in the machine tunnel. In the last year, during the shutdown periods when access is available, the temporary cable installation was completed, systems were then swapped over onto the temporary cables, cables which couldn’t be re-used were removed, and then the new DDBA cables installed. This will mean that when the new DDBA girders are installed later this year they can be readily connected to the pre-installed and tested cables.

In response to the risk of extended downtime in the event of further RF cavity failures, it was decided to augment the existing RF system with two normal conducting cavities, of the Higher-Order Mode (HOM) damped cavity design currently in use at ALBA, Spain, and BESSY, Germany. The additional cavities will give greater operating margin which will be especially useful to minimise the impact of any planned, or unplanned, work on the superconducting cavities in the future. The cavities are due for delivery in early 2017, meanwhile the implementation in the storage ring is being finalised. The solution that has been adopted is to install one cavity in each of straights 16 and 18, upstream of the relevant insertion device (Fig. 5). These straights are adjacent to the existing straight in which the superconducting cavities are located (straight 17), which allows the existing RF power amplifier to be used, with suitable high power transmission lines.

Other related work which is in progress includes the development of a digital longitudinal feedback system, in order to combat potential longitudinal instabilities of the electron bunches due to higher order modes in the cavities. A new digital low-level RF (LLRF) system is also being developed in collaboration with ALBA to minimise the variations in phase and amplitude of the accelerating voltage in the HOM-damped cavities, as well as in the existing superconducting cavities, in order to reduce the oscillation of the bunches in the longitudinal plane. 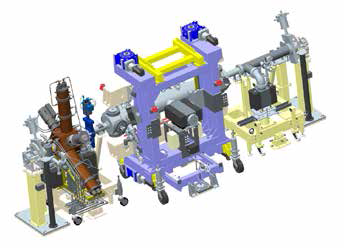 Figure 5: Layout of one of the two new normal conducting cavities upstream of an in vacuum insertion device.

During the last year a design study has commenced in earnest for a possible major upgrade of the Diamond machine, Diamond-II. The type of lattice which is currently receiving the most attention is a “Double-Triple Bend Achromat” (DTBA), or hybrid 6BA. Such a lattice is an extension of the DDBA concept, and has the potential to provide a 20-fold reduction in emittance as well as additional straight sections for insertion devices, or other machine elements.