Diamond Light Source is being used to improve low cost methods for carbon capture. Scientists from the University of Leeds are using the UK’s national synchrotron to investigate the efficiency of calcium oxide (CaO) based materials as carbon dioxide (CO2) sorbents. Their results, published in the journal of Energy & Environmental Science, provide an explanation for one of the key mechanisms involved. This new knowledge will inform efforts to improve the efficiency of this economically viable method of carbon capture and storage.

Current techniques for post-combustion carbon capture filter out CO2 from a power plant’s flue gases as they travel up a chimney. The filter is a solvent that absorbs the CO2, before being heated, releasing water vapour and leaving behind the CO2. In pre-combustion, the CO2 is filtered out by use of a catalytic converter before the fossil fuel is burned and the CO2 is diluted by other flue gases. These methods can prevent 80% to 90% of a power plant’s carbon emissions from entering the atmosphere.

CaO based materials have a large range of applications including pre- and post-combustion carbon capture technologies and thermochemical fuel upgrading. They are low cost, high abundance, have a large sorption capacity and fast reaction rates during the chemical process. They capture CO2 in the temperature range 400-800 °C via the formation of calcium carbonate (CaCO3) which can be regenerated with subsequent release of CO2, ready for compression and storage. However, after multiple capture and regeneration cycles, the materials’ capacity for capture decreases due to the loss of surface area through sintering, a process that fuses powders together to create a single solid object. Although the surface area can be restored through hydration, the material suffers a reduction in mechanical strength. If these problems can be overcome, CaO based materials could provide a low cost answer for carbon capture on a very large scale.

Led by Dr Valerie Dupont and Dr Tim Comyn from the University of Leeds’ Faculty of Engineering, the team carried out a series of experiments on Diamond’s High resolution powder diffraction beamline, I11, using intense X-rays to study the carbon capture and hydration process in CaO based materials on the nano-scale. Their observations suggest a mechanism for the interaction between CaO and water during hydration.

“We found that the stresses in the calcium hydroxide phase when bound to CaO were more than 20 times higher than its strength, leading to disintegration and the generation of nano-sized crystallites. Although the generation of a high surface area is a good thing, mechanical friability needs to be kept in check in order to achieve long term reliability for these systems. Our analysis provides an explanation of the enhanced capture/disintegration observed in CaO in the presence of steam. Now we understand this, the next step is to develop methods for improving the materials used, and apply the same techniques to other systems.” 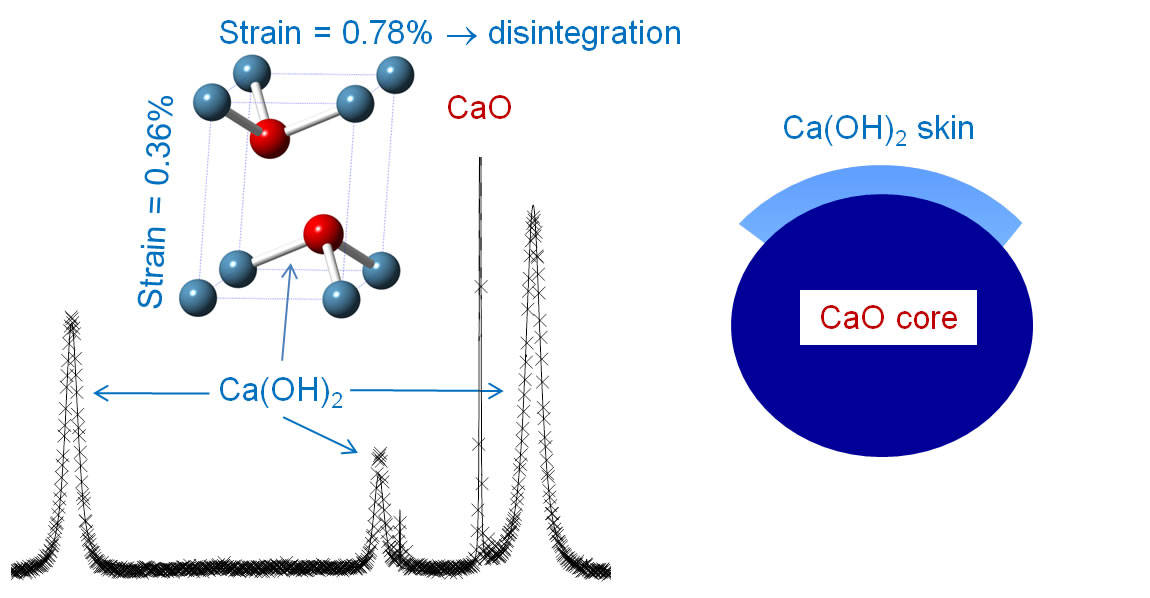 CaO readily forms a shell of calcium hydroxide when exposed to water in the air (right). Due to differences in atomic congurations (top left) between the oxide and hydroxides, enormous strains develop due to the interface. These strains of 0.78% lead to stresses 20 times higher than the rupture strength of the hydroxide leading to rupture and the generation of nanoparticles.

Deconvolution of the data generated by Diamond (bottom left) allows the Leeds team to determine the size and strain in these layers, from the breadth of the peaks (the peaks from CaOH are far narrower than CaO). Conventional X-ray sources would have considerable peak overlap, making this type of analysis almost impossible.

Roger Molinder, an Engineering and Physical Sciences Research Council (EPSRC) funded PhD student on the project, describes, “Using the high resolution powder diffraction beamline at the Diamond synchrotron was key to this discovery; conventional X-ray sources such as those found at most Universities in the UK provide data with broad peaks, which do not make this sort of analysis possible. From a rigorous analysis of peak shapes arising from the data, we were able to determine the shape and size of the hydroxide phase, and determine the level of stress. Knowledge of these derived parameters is key to understanding the mechanism of sintering/disintegration.”

Concerns about global warming have prompted both national and international efforts to curb CO2 emissions. CaO based materials are a promising candidate for the removal of CO2 from flue gases at temperatures between 400 and 800 °C from processes such as fossil-fuel combustion. They are also being considered as a means to remove the CO2 that is generated as a result of thermochemical fuel upgrading with biomass sources, which are growing more and more popular as an alternative to fossil fuels. Using CaO based materials for carbon capture is just one of the ways to combat global warming. Since CaO based materials are low cost, there is an economic incentive to solve the problem of surface area loss to potentially turn this into a method for large scale CO2 capture. These recently published results are a promising step towards improving these low cost methods.