A team of scientists and a games specialist have designed ‘Diamond: The Game’, a board game developed to give secondary school students a chance to explore a broad range of STEM scientific careers and subjects. This is achieved through first-hand experience of the different aspects of working in scientific research and life as a scientist and shows how research at a facility like Diamond underpins successful science. Their paper, Diamond: The Game – a board game for secondary school students promoting scientific careers and experiences, has been published in the journal Research for All. 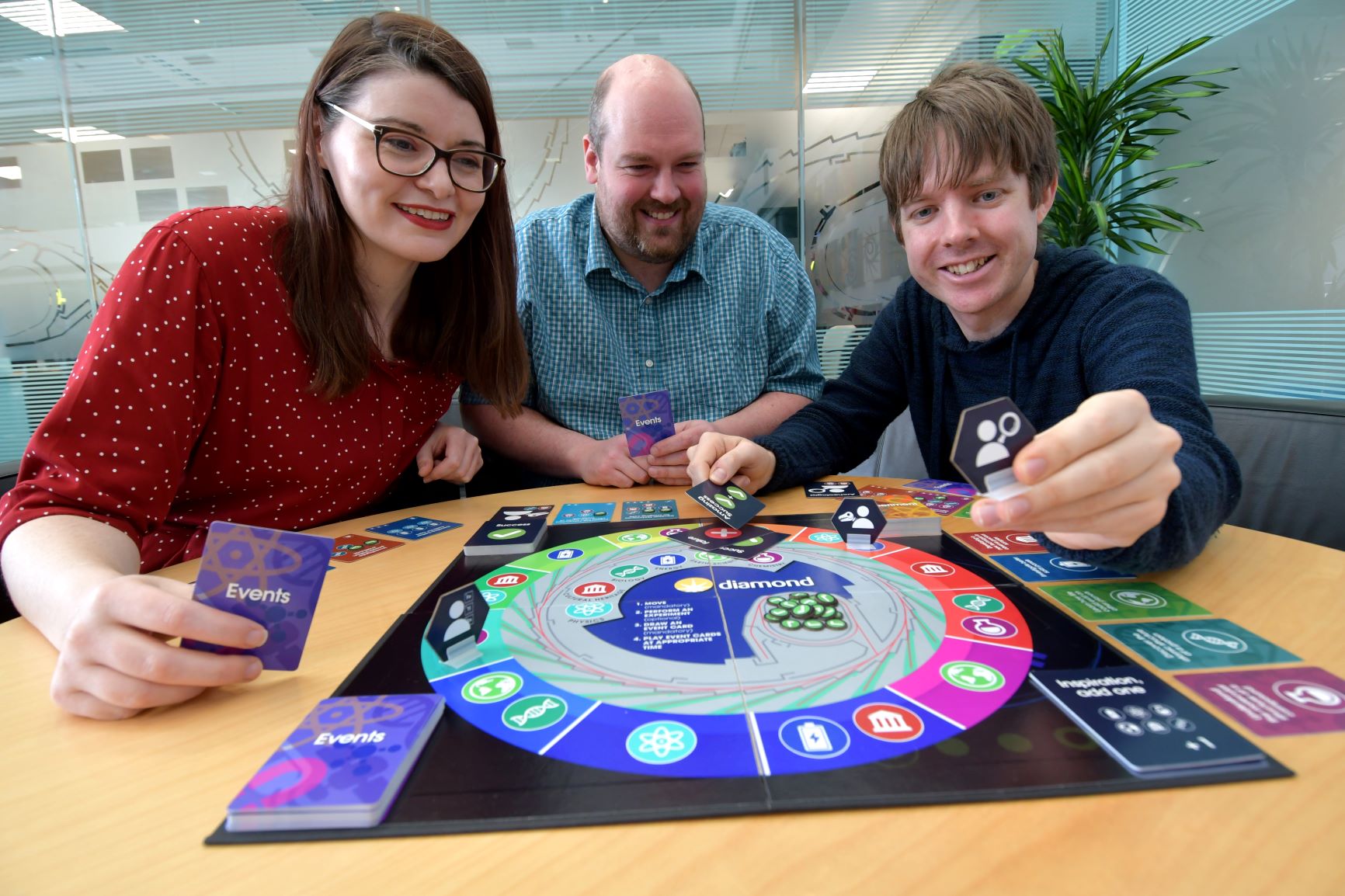 Three of the authors of the paper and creators of Diamond: The Game, (L-R) Dr Claire Murray, Dr Mark Basham and Dr Matthew Dunstan.

Dr Mark Basham and Dr Claire Murray from the UK’s national synchrotron Diamond Light Source and Dr Matthew Dunstan from the University of Cambridge created the game for 2-5 players. It lasts between 20-30 minutes and is for ages 10 and up. It puts students directly in the role of a researcher at Diamond, visiting different beamlines (laboratories) to make progress in a diverse range of scientific projects in Physics, Chemistry, Cultural Heritage, and more.

Board games can be powerful, reusable and entertaining tools for directly engaging students and the public with scientific research. Conveying cutting-edge science through play is not trivial, and the power of games to stimulate independent curiosity and conversation should not be underestimated. However, this requires careful consideration of mechanics, messages and accessibility to successfully deliver on this goal. Whether it is the variety of science that exists, the timely value of a vital collaboration, the disappointment of a failed experiment, or gratitude for the help from a friendly staff scientist, the game puts students directly in the action and encourages them to make their own choices about what type of scientist they want to be.

It is important to create tools and resources to engage underserved communities but it is difficult to achieve the perfect inclusive design. The team therefore tested this with different groups to make it as accessible as possible. Critically we found the natural elements of creating a fun and inclusive game, capable of being played in the classroom, necessitated a clear focus on key messages. It is essential to note, however, that these considerations greatly enhanced the experience for students, teachers, and the board game activity deliverer.

A key aspect of the game, Dr Basham explains, was the need to talk about the reality of being a scientist;

The game normalises failure as a key process in science, but this was unexpected for many of our players. The role of failure in science can be incredibly powerful and indeed is necessary to improve science literacy at home, at school and beyond. Additionally, many players in our survey were surprised to find collaboration such an important element in the game. Teamwork underpins 99% of modern science, so this misunderstanding about the skills involved in scientific careers in these age groups is very concerning.

The team play-tested the Game with 222 students, many of whom were visiting Diamond for one of its open days or when Dr Mark Basham was visiting local schools. Challenges, such as pandemics, make public engagement very difficult. However, creativity and a quick response can provide new opportunities and routes for engagement. In July 2020, they created and released a free print and

play version, which has had over 14,000 players from 30+ countries, distributed online and via direct contact through schools. A boxed version of the game is now being distributed to 100 UK schools in underserved areas via an STFC Sparks award grant. Miss Greenwood, a teacher in Reading reviewing the game says: “A fantastic game to ignite the scientist in all our young people. Easy to follow instructions and lesson plans. An easy win for fellow busy teachers across all key stages.”

The game was developed in line with Diamond’s Public Engagement programme which actively promotes careers in STEM to secondary level students who can visit the facility and see their scientific curricula in action. The target for the game was to therefore create an engagement option for schools that were not able to visit the facility. This became even more important with the advent of the pandemic. The team say that the potential for a resource like this to function in both formal and informal settings make it a valuable tool in multiple learning environments, especially as there is evidence children as early as seven make career limiting decisions. 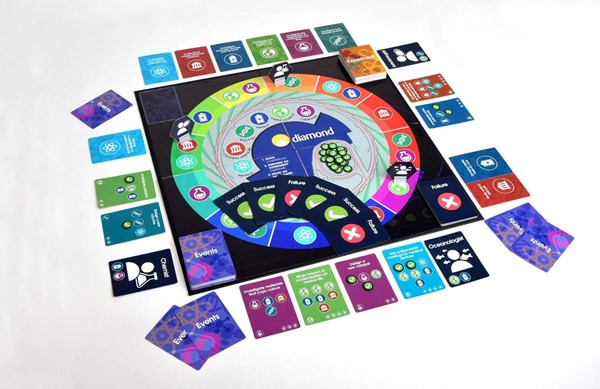 This paper showcases a gaming approach which could be adapted by educators, educational professionals, or subject enthusiasts to cover any desired topic of study ie. not limited to STEM subjects and could be transferred to the broader curriculum. Diamond – The Game reflects the interdisciplinary nature of science undertaken at a facility like the Diamond synchrotron and how it underpins work on everything from fragments of Rembrandt’s painting of Homer, COVID-19 drug screening, to the degradation of the Mary Rose Tudor warship and much more.

The authors explain that the emphasis on scientific careers was particularly important following discussions with careers advisors who were interested in the opportunity to explore a breadth of scientific careers and their interdisciplinarity, in line with the Gatsby good career guidance benchmarks [Holman 2013]. The team decided to directly address this in their board game by highlighting collaboration and by connecting every scientist in the game with multiple science topics.

The same report highlighted the power of empowering students to imagine themselves as a scientist by sharing the many ways you can be a scientist. This is difficult to achieve via a narrow understanding of potential careers, which will naturally result in a limited uptake of science subjects in secondary school. In turn this will reduce science capital, a conceptual tool to measure an individual's exposure and knowledge of science, further for future generations. An additional problem is that the perception of (the lack of) scientific success, failure and collaboration contribute towards the belief that science is for the elite few. By introducing students to these concepts early we hope to destigmatise failure and collaboration, which are both essential elements of every scientist’s career.

The paper outlines how the development of Diamond: The Game has shown the value in using games for educational purposes, highlighting their ability to place participants as active agents of their learning within the chosen setting and content matter. In this case, students were directly faced with the emotional highs and lows of conducting scientific experiments at a large-scale national facility, which in turn directly questions their perceptions of their own aptitude for STEM careers and what being a scientist really entails.

Through playing the game participants were led to consider the full breadth of different scientific disciplines that utilise Diamond, the interdisciplinarity of global scientific problems, the nature of failure and success in experiments, and the broader range of people who work at a facility like this to ensure its smooth operation. These changing perceptions are evident in the survey data, where there is an uplift in the number of students who would consider a science or engineering career after playing the game, as well as an increase in the number of students who see science in their daily life.