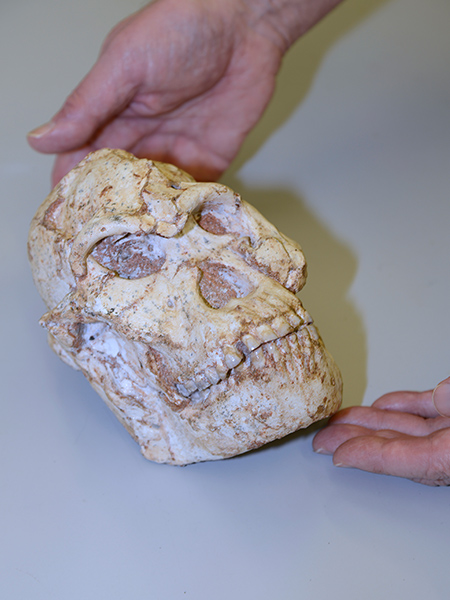 In June 2019, an international team brought the complete skull of the 3.67-million-year-old ‘Little Foot’ Australopithecus skeleton, from South Africa to the UK and achieved unprecedented imaging resolution of its bony structures and dentition in an X-ray synchrotron-based investigation at Diamond. The X-ray work is highlighted in a new paper in e-Life, published today focusing on the inner craniodental features of ‘Little Foot’. The remarkable completeness and great age of the ‘Little Foot’ skeleton makes it a crucially important specimen in human origins research and a prime candidate for exploring human evolution through high-resolution virtual analysis.

To recover the smallest possible details from a fairly large and very fragile fossil, the team decided to image the skullusing synchrotron X-ray micro computed tomography at the I12 beamline at Diamond, revealing new information about human evolution and origins. This paper outlines preliminary results of the X-ray synchrotron-based investigation of the dentition and bones of the skull (i.e., cranial vault and mandible).

Leading author and Principal Investigator, Dr Amélie Beaudet, Department of Archaeology, University of Cambridge and honorary research at the University of the Witwatersrand (Wits University), explains:

We had the unique opportunity to look at the finest details of the craniodental anatomy of the ‘Little Foot’ skull. While scanning it, we did not know how well the smallest structures would be preserved in this individual, who lived more than 3.5million years ago. So,when we were finally able to examine the images, we were all very excited and moved to see such intimate details of the life of ‘Little Foot’ for the first time. The microstructures observed in the enamel indicate that Little Foot suffered through two clear periods of dietary stress or illness when she was a child.

The team were also able to observe and describe the vascular canals that are enclosed in the compact bone of the mandible. These structures have the potential to reveal a lot about the biomechanics of eating in this individual and its species, but also more broadly about how bone was remodelled in ‘Little Foot’. The branching pattern of these canals indicates some remodelling took place, perhaps in response to changes in diet, and that 'Little Foot' died as an older individual.

This movie was created by Dr. Nghia T. Vo and Dr. Robert C. Atwood at Diamond Light Source. The first part of the movie is an animated series of slices, the second part is a 3D render of the external features of the skull. The visualisation was created by downsampling some of the data generated during the experiments at Diamond by the ‘Little Foot’ research team from the University of Witwatersrand, South Africa.

The team also observed tiny (i.e., less than 1 mm) channels in the braincase that are possibly involved in brain thermoregulation (i.e., how tocool down the brain). Brain size increased dramatically throughout human evolution (about threefold), and, because the brain is very sensitive to temperature change, understanding how temperature regulation evolves is of prime interest.

Traditionally, none of these observations would have been possible without cutting the fossil into very thin slices, but with the application of synchrotron technology there is an exciting new field of virtual histology being developed to explore the fossils of our distant ancestors.

Important aspects of early hominin biology remain debated, or simply unknown. In that context, synchrotron X-ray imaging techniques like microtomography have the potential to non-destructively reveal crucial details on the development, physiology, biomechanics and taxonomy of fossil specimens. Little Foot’s skull was also scanned using the adjacent IMAT neutron instrument at ISIS Neutron and Muon Source, combining X-ray and neutron imaging techniques in one visit to the UK. With such a rich volume of information collected, we’re eager to make more discoveries in the complementary X-ray and neutron tomography scans. 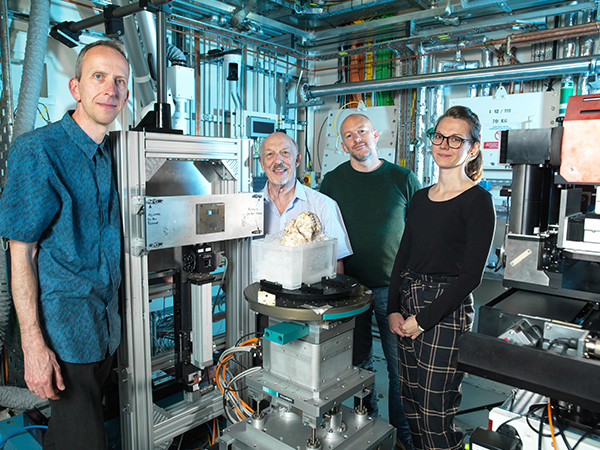 Applications of X-ray synchrotron-based analytical techniques in evolutionary studies have opened up new avenues in the field of (paleo) anthropology. In particular, X-ray synchrotron microtomography has proved to be enormously useful for observing the smallestanatomical structures in fossils that are traditionally only seen by slicing through the bonesand looking at them under a microscope. Through the last decade, there have been more studies in palaeo anthropology using synchrotron radiation to investigate teeth and brain imprints in fossil hominins. However, scanning a complete skull such as the one of ‘Little Foot’ and aiming to reveal very small details using a very high-resolution was quite challenging, but the team managed to develop a new protocol that madethis possible. To recover the smallest possible details from a fairly large and very fragile fossil, the team decided to image the skull using synchrotron X-ray micro computed tomography at the I12 beamline at Diamond.

This level of resolution is providing us with remarkably clear evidence of this individual’s life. We think there will also be a hugely significant evolutionary aspect –as studying this fossilin this much detail will help us understand which species she evolved from and how she differs from others found at a similar time in Africa. This is just our first paper so watch this space. Funding permitting, we hope to be able to bring other parts of ‘Little Foot’ to Diamond.

This research was about bringing ‘the best-preserved Australopithecus skull' to the ‘best of the best’ synchrotron facility for our purposes. Traditionally, hominins have been analysed by measuring and describingby the exterior shapes of their fossilised bonesto assess how these differ between species. Synchrotron development and microCT resources means that we are now able to virtually observe structures inside the fossils, which hold a wealth of information. More recently, technology has developed to such an extent that we can now virtually explore minute histological structures in three dimensions, opening new avenues for our research. 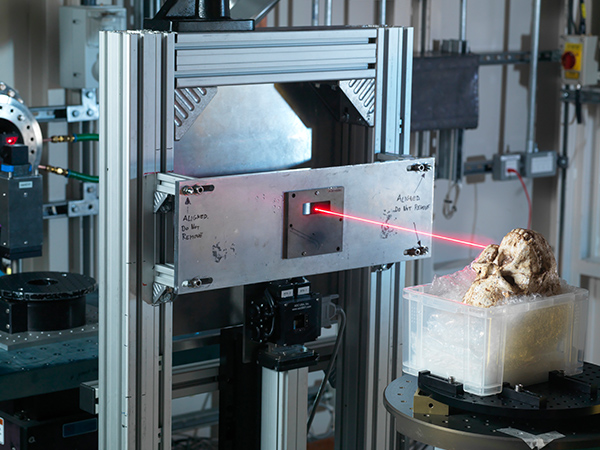 Fossil skull in Diamond’s beamline I12

The first bones of the ‘Little Foot” fossil were discovered in the Sterkfontein Caves, northwest of Johannesburg, by Professor Ron Clarke of the University of the Witwatersrand in 1994. In 1997, following their discovery of the location of the skeleton, Professor Clarke and his team spent more than 20 years painstakingly removing the skeleton in stages from the concrete-like cave breccia using a small airscribe (a vibrating needle). Following cleaning and reconstructing, the skeleton was publicly unveiled in 2018. Wits University is the custodian of the StW 573, ‘Little Foot’, fossil.

Professor Ron Clarke, the British scientist based in South Africa who discovered and excavated ‘Little Foot’ and conducted all the early examinations of the fossil, was also part of the research team. He concludes:

It has taken us 23 years to get to this point. This is an exciting new chapter in ‘Little Foot’s’ history, and this is only the first paper resulting from her first trip out of Africa. We are constantly uncovering new information from the wealth of new data that was obtained. We hope this endeavour will lead to more funding to continue our work. Our team and PAST* emphasise that all of humanity has had a long-shared ancestryin harmony with the natural world, and that learning from those earliest ancestors gives us perspective on the necessity to conserve nature and our planet.

This paper is the first in what is expected to be a series of papers resulting from the wealth of data the Principal Investigators from the University of Witwatersrand in South Africa the University of Cambridge in UK, co-investigators from the Natural History Museum and Diamond were able to gain from their collaboration. 'Little Foot' also underwent neutron imaging at STFC’s ISIS Neutron and Muon Source at the same time as the work undertaken at Diamond, providing unprecedented access to complementary advanced imaging techniques. Neutrons are absorbed very differently from X-rays by the fossil’s interior parts thanks to the sensitivity of neutrons to certain chemical elements. Despite having coarser spatial resolution, neutron tomography can sometimes differentiate between different mineralogical constituents for which contrast is very low for X-rays.