Hybrid photoactive perovskites imaged with atomic resolution for the first-time 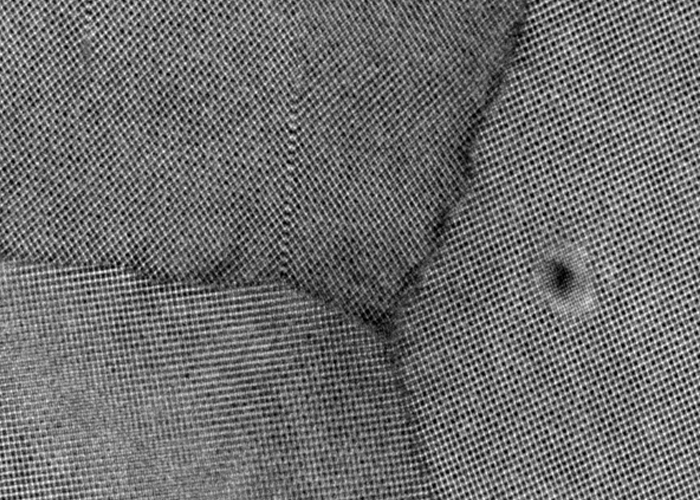 An example of one of the images obtained using the new protocol, which illustrates several of the phenomena that the team has been able to describe for the first time, including a range of grain boundaries, extended planar defects, stacking faults, and local inclusions of non-perovskite material.

A new technique has been developed allowing reliable atomic-resolution images to be taken, for the first time, of hybrid photoactive perovskite thin films.- highly favourable materials for efficient photovoltaic and optoelectronic applications. These images have significant implications for improving the performance of solar cell materials and have unlocked the next level of ability to understand these technologically important materials. The breakthrough was achieved by a joint team from the University of Oxford and Diamond who have just released a new paper published in Science.

Using the ePSIC (the Electron Physical Science Imaging Centre) E02 microscope and the ARM200 microscope in at the Department of Materials, University of Oxford, the team developed a new technique which allowed them to image the hybrid photoactive perovskites thin films with atomic resolution. This gave them unprecedented insights into their atomic makeup and provided them with information that is invisible to every other technique.

Dr Mathias Uller Rothmann, from the Department of Physics, University of Oxford, explains:

This is the final step on the way to being able to image, and thus understand, these important solar cell materials at the most fundamental, atomic level. It is a significant discovery which has not been accomplished successfully before despite these materials being some of the most intensively studied in the world over the past eight years. The material damages incredibly quickly under an electron beam, so we had to turn the electron dose down to the point where we were running at the limits of what the detectors can record. In fact, the damage happens so fast that under "normal" imaging conditions, the damage is done before you realise it. This means that there is probably a relatively large amount of literature out there which has made observations based on the damaged version of the material, and not the one that goes in the actual solar cells.

The mechanisms behind the impressive performance of these particular perovskites have yet to be fully understood, but they likely depend on atomic level properties that may be unique to them.

Imaging beam sensitive materials at atomic resolution is extremely challenging as the high energy electrons tend to damage the sample, altering its atomic structure. By adapting an imaging technique not usually associated with low electron dose imaging, this collaboration between scientists at the University of Oxford and ePSIC has achieved unprecedented resolution on this important class of materials. Not only has this answered questions about the atomic structure of hybrid perovskites but also opens avenues of research into many other beam sensitive materials.

The paper reviews a combination of conditions that can now be used for imaging the materials as well as images of microscopic properties that have never been observed before in these materials. The team describe this as revolutionary because it now allows scientists to study exactly what the local makeup of the films are with atomic precision and accuracy. This technique is fairly widely used to study other materials, but due to the remarkably unstable nature of the photoactive perovskites, especially under an electron beam, this has not been possible for hybrid perovskites until now.

Using our protocol, we have been able to describe the exact atomic nature of grain boundaries, one of the most poorly understood aspects of perovskite solar cells, as well as describing a whole new range of crystal defects that can have a significant impact on the macroscopic performance of solar cell devices. You could say that we have now unlocked the next level of ability to understand these exciting materials. While we don't yet have a full picture of what this will mean for the development of these solar cells, researchers will now be able to give definite answers instead of educated guesses when trying to answer questions about the microscopic properties of perovskite solar cell materials. Answering these questions will be a huge step in guiding the field towards ever better performing solar cells, and, perhaps, towards preventing a climate catastrophe.

The team's new technique enabled them to observe a completely new range of phenomena pertaining to hybrid perovskites, including important properties such as the exact makeup of the grain boundaries and other interfaces, which other techniques have not been able to resolve. Additionally, the team observed a range of crystallographic defects that have never been considered for hybrid perovskites and which are known in other solar cell materials to be highly detrimental to the overall performance. Removing these defects will be important for high performance, but until now, it was impossible to reliably identify their presence.