Who were the astronauts behind the moon rock samples? 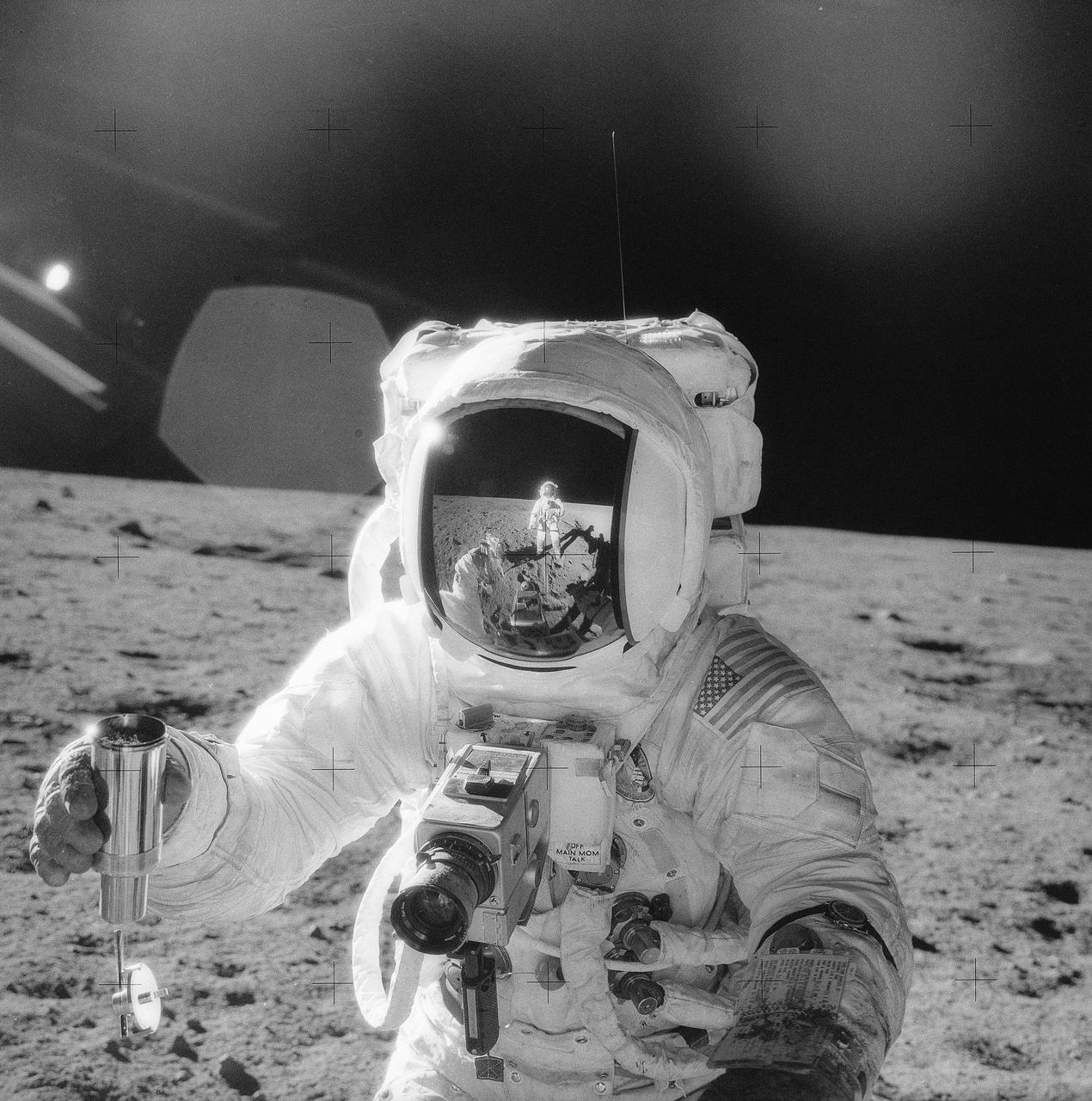 Everyone can name the first two people to step on the Moon, but the Moonwalkers from the later Apollo missions are less well known. During Apollo 12, Mission commander Charles "Pete" Conrad and Lunar Module Pilot Alan L. Bean collected 35kg of samples in an area of the Ocean of Storms (Oceanus Procellarum) that had previously been visited by several unmanned missions, and was therefore named Mare Cognitum (Known Sea). For Apollo 15, Commander David Scott and Lunar Module Pilot James Irwin spent three days near Hadley Rille, in an area of the Mare Imbrium called Palus Putredinus (Marsh of Decay). They used the first lunar rover to travel much further, and collected 77kg of samples.

These rock samples are so precious that they are kept in a special building, the Lunar Sample Laboratory Facility at NASA 's Johnson Space Center (JSC) in Houston. They have been housed in a clean environment for nearly 50 years.

Not all Apollo samples are still in Houston, however. From the 48lbs (nearly 22kg) of rocks that Neil Armstrong and Buzz Aldrin brought back from their Apollo 11 Moon landing, plaques were prepared with four pieces weighing 50 milligrams. The White House presented these as goodwill gifts to the leaders of 135 countries, the United Nations and all 50 American states.

Diamond shines its light on Moon Rocks from Apollo Missions

Nearly 50 years after our first steps on the Moon, rock samples from the Apollo missions still have a lot to tell us about lunar formation, and Earth’s volcanoes. 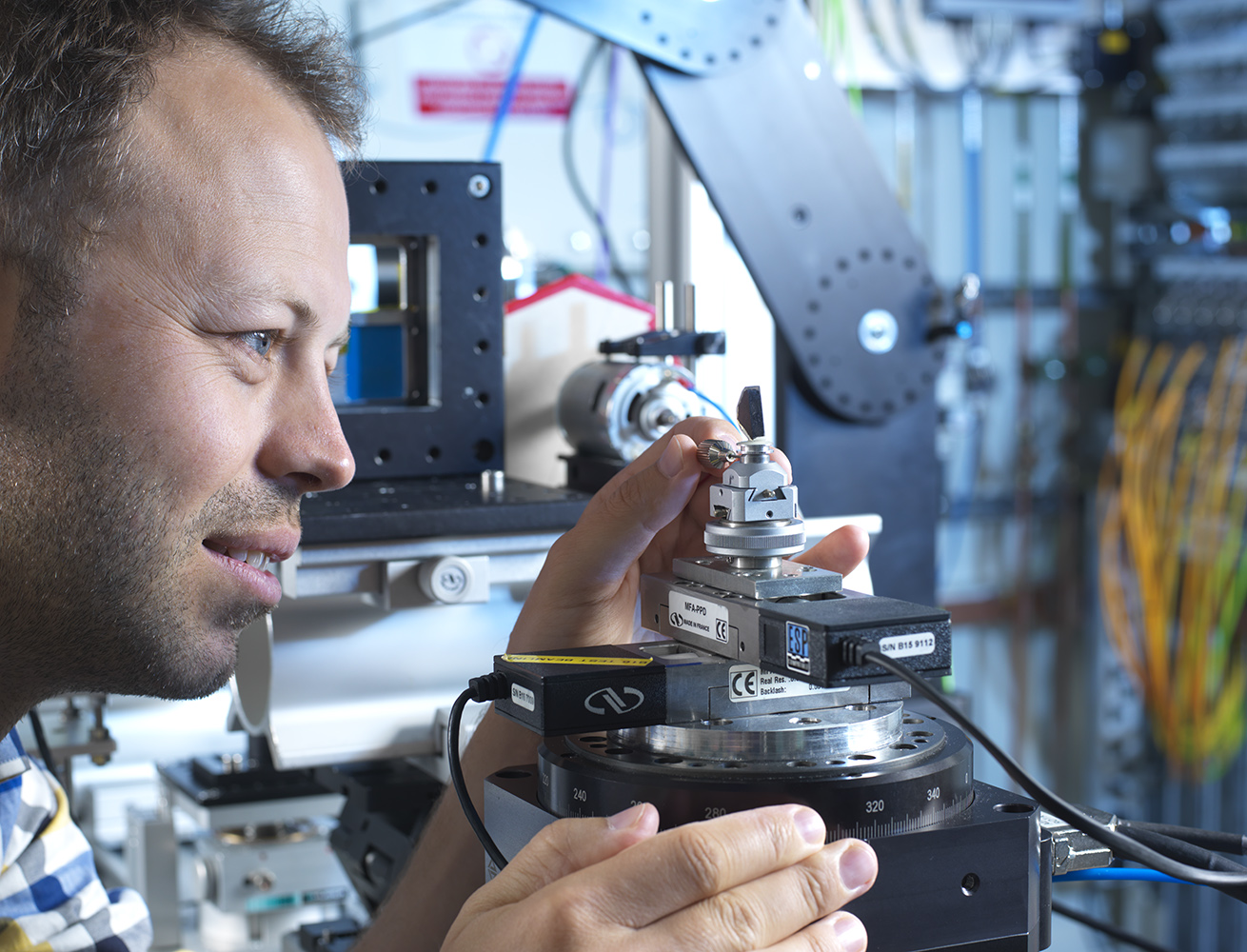 An international collaboration involving scientists in Tenerife, the US and the UK, are using Diamond, the UK’s national synchrotron light source, to investigate Moon rocks recovered during the Apollo Missions in a brand new way.

We have used a new imaging technique developed at Diamond to carry out 3D mapping of olivine – a common green mineral found in the Earth’s sub-surface and in these Moon rock samples. These maps will be used to improve understanding of the Moon’s ancient volcanic systems and help to understand active geological processes here on Earth.

With this new technique, our team may be able to recover from these Moon rock samples information such as what the patterns of magma flow within the volcanic system were, what the magma storage duration was like, and potentially even identify eruption triggers. The data will be analysed using state-of-the-art diffusion modelling which will establish the history of individual crystals. 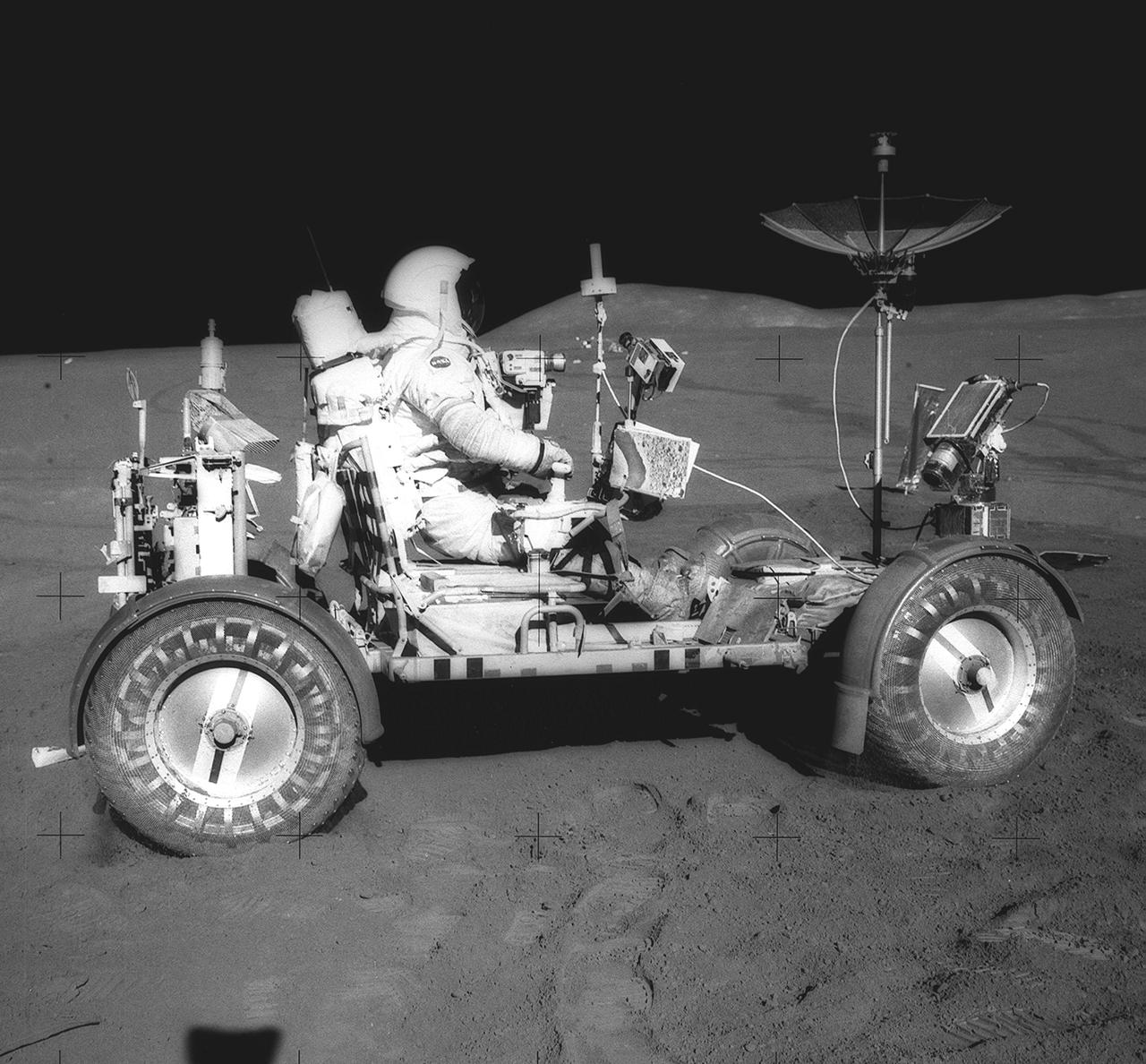 This photograph was taken during the Apollo 15 mission on the lunar surface. Astronaut David R. Scott waits in the Lunar Roving Vehicle (LRV) for astronaut James Irwin for the return trip to the Lunar Module, Falcon, with rocks and soil collected near the Hadley-Apernine landing site.

When early astronomers looked at the Moon, they mistakenly thought that the darker areas they could see were seas, and named them Mare, the Latin for sea. Around 16% of the lunar surface is covered in this dark material, which we now know is basalt, a volcanic rock. Before the Apollo missions, we believed that these areas meant that they were young, but when the rock samples brought back from the Moon were examined, they were shown to be ancient; the youngest volcanic Moon rock sample is nearly 3 billion years old.

The team have examined samples from the Apollo 12 and 15 missions, using an advanced X-ray speckle imaging technique developed on Beamline B16 at Diamond Light Source. As Dr. Hongchang Wang, Senior Optics Scientist, explains: “Combined with the recently developed fast fly-scan tomography and novel white beam camera, the X-ray speckle imaging technique has allowed us to swiftly and effectively collect 3D information of olivine inside of the lunar rock in much more detail than ever before.” This new technique does not damage the lunar samples.

Nearly 50 years after the first humans landed on the Moon, there is still a lot we don’t know about how the Moon formed, and the nature of lunar volcanic activity. We know that, on Earth, volcanic eruptions can be triggered (or ended) by changes in magma (molten rock) in or beneath the planet’s crust. The cause of these changes is often thought to be a result of the mixing of different batches of magma in the ‘plumbing system’ below the volcanoes. Volcanologists are working on detecting and understanding these changes, by examining volcanic rock samples, with the aim of being able to accurately forecast future eruptions.” 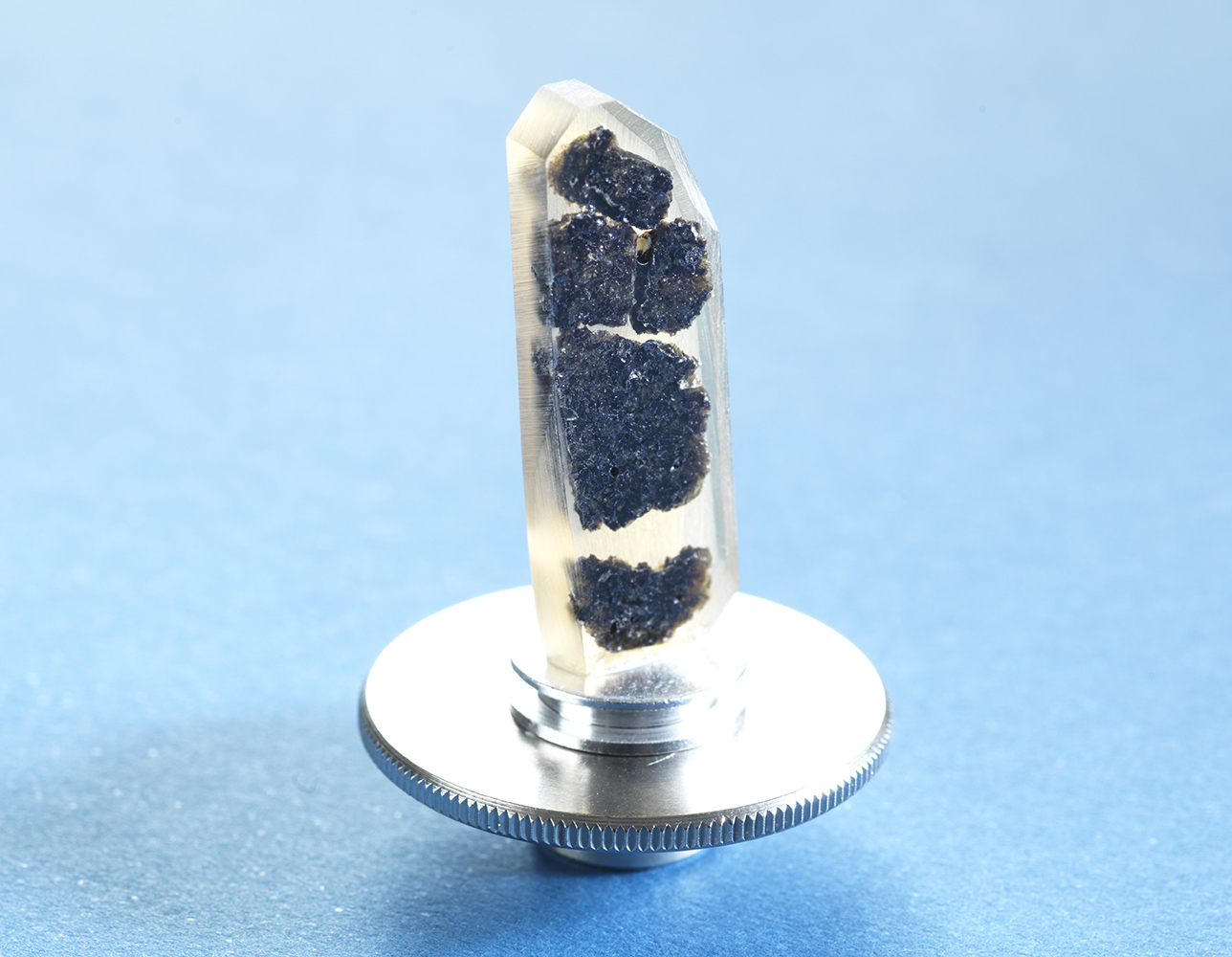 The same techniques are now being applied to lunar rock samples, which will provide new insights into how the Moon was formed, and its volcanic history.

In magma, the ratio of iron to magnesium in olivine changes over timeframes ranging from hours to months, and these changes are ‘locked in’ to the mineral as the magma cools. Accurate 3D images of the iron distribution within olivine in the Moon rock samples will ‘unlock’ information about the volcanic processes in which they formed.

NASA has approved the use of 18 lunar samples for these experiments, and similar, well-characterised terrestrial samples have also been scanned, and used to verify the chemical composition of olivine. Samples are loaned to scientists who wish to study them, a process overseen by NASA's Apollo sample curator, Ryan Zeigler. As a scientist who understands the trade-off between studying the samples and preserving them, a balance must be struck in experiment design. These decisions are becoming easier as we develop more powerful, non-destructive techniques. He comments:

The researchers are now using state-of-the-art diffusion modelling to establish the history of individual crystals of olivine from 3D images. These techniques will be applied to the new data gathered during this beamtime. The results will add to our understanding of lunar and planetary formation, topics which have been continually debated since the samples were first returned to Earth. 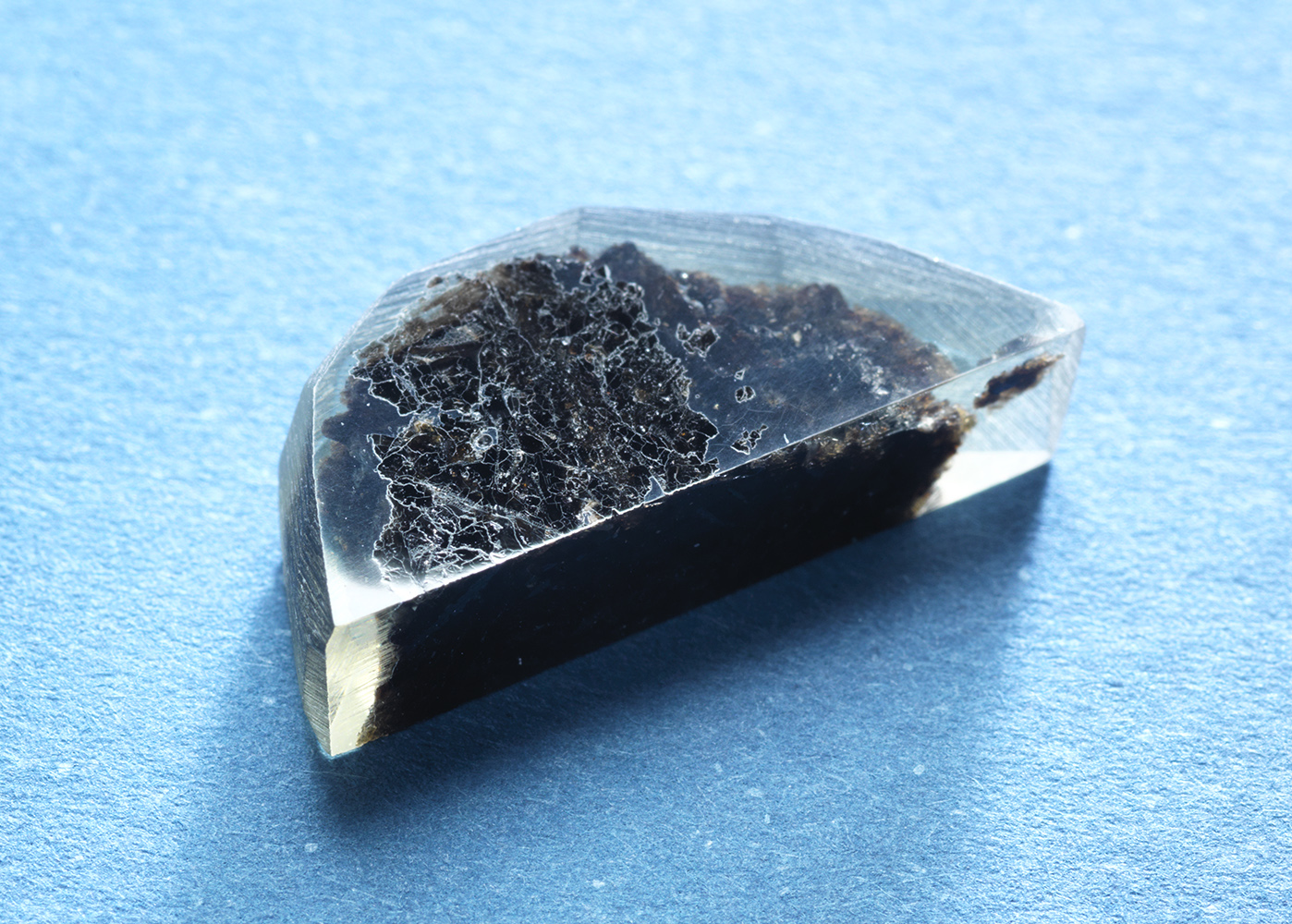 Prof Andrew Harrison CEO at Diamond Light Source concludes: “A successful demonstration of the new technique at B16 will pave the way, we hope, for extended collaboration with NASA and maybe next No10* Downing Street and the Natural History Museum might be interested in loaning us their own samples.”

Diamond has a huge amount of experience of investigating priceless heritage items, and gaining new insights from them. Using these techniques, we could study the UK’s Moon rock samples in new ways, and these fresh images would give them more meaning and inspire the next generation of scientists and engineers.

*The UK’s Moon rock gift was presented to Prime Minister Harold Wilson by President Richard Nixon in 1970. It went on a tour of museums around the country, starting at the Science Museum in London, returning to Downing Street in 1973. In 1979 an aide to Margaret Thatcher revealed to her that the Moon rocks had been languishing in a cupboard for several years! Since then they have been on display in Downing Street and the Natural History Museum.